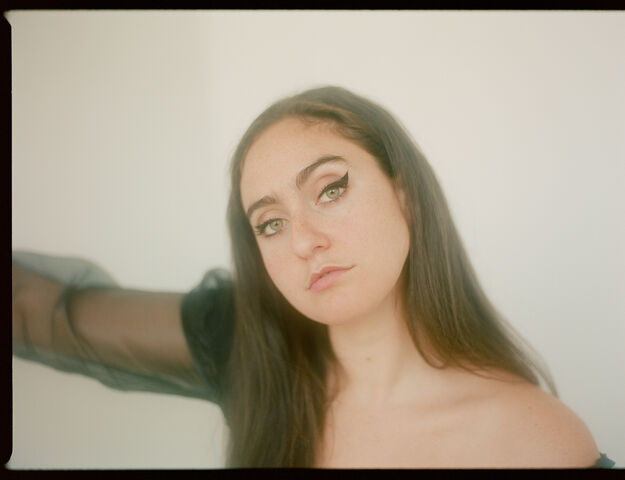 There are certain people who live their lives naked. We have all met someone like this, or maybe we wish that we could live our own lives this way. They carry a willingness to open themselves up to the world, to find connection wherever they go. Catherine Cohen is one of these people.

BUST spoke to Cohen about overcoming a need for validation, finding her own definition of confidence, and the therapeutic power of writing.

How did you get started in comedy? Was it always your plan to move to New York and pursue comedy after university?

Bravely, my dream was always to be an actress in NYC. I fell into comedy after taking an improv class with some UCB [Upright Citizens Brigade] teachers at the Williamstown Theater Festival one magical summer. Unfortunately, I was instantly addicted.

You have such a specific style of humor. What inspired you to explore this candid self-deprecating but simultaneously self-obsessed comedy?

I had no choice! It would be so glamorous to keep a single, solitary thought to myself, but I do find that impossible to do.

Were there any specific writers or comedians who inspired your style of humor, who made you want to work in that style?

I grew up seeing Molly Shannon do Superstar and thinking that was the funniest thing I had ever seen in my entire life and losing my shit. As I got older I got more into confessional poetry and writing. So that silliness combined with revealing real stuff about myself. I always felt most connected to people who were just totally honest and open about what they were going through, cause it always made me feel less alone. Just reading Nora Ephron and Maggie Nelson, not even comedians, just writers.

A lot of your work is based on your experiences with dating and sex. Sometimes people wrongly have a negative view of women who speak so honestly about these things—that maybe they shouldn’t be taken seriously on an intellectual level, or even just as a person. Do you ever find that the perception of your comedy persona bleeds into how people perceive you as yourself? Do people have certain presumptions about who you are?

I think people might assume I’m a self-absorbed bitch and I absolutely am…but I’m also very kind and fragile. Kindness is all that matters to me, fuck the rest.

Do you find that you weren’t taken seriously when you first started in comedy? Is this still an issue that comes up?

I think men are very scared of women who like themselves. Oftentimes a bro will come to one of my shows and I’ll feel like I have to win them over. I feel like I do, and then after they’re like “Woah, that was actually cool.” And I’m like “Yeah…you’re late to the party, bitch.”

There are always obviously going to be people who don’t like what I do and I can’t change that and, obviously, I would love it if everyone liked me, but it’s not realistic. I grew up being told I can do anything I want and I never felt at all like I can’t do this cause I’m a woman.

As I’ve gotten older I’ve noticed just how subtle and nuanced the misogyny can be sometimes and how there are often things you accept as normal and then when you unpack it, you can tell it’s rooted in hatred of women or fear of their power. It’s a little disheartening, but it’s also important to recognize and talk about. I think I also have been lucky to know and work with many men who love women. I think it’s possible to be a good guy but there’s a lot going against you. It’s tricky.

I think it’s kinda insidious. You don’t notice it’s happening, and then you realize or look back. I especially look back at myself in college and realize how often I was trying to change or behave a certain way to impress a man. That used to be such a big part of where I got my value. Now it matters less to me. It just goes back to if someone doesn’t like my work, there are so many people who I like connecting with, I don’t need to worry about the ones who don’t.

What has been the biggest challenge, as a performer, in shifting your shows online?

I miss the crowds so much I am losing my mind! Doing the online shows is so fun, but nothing compares to the rush of a live crowd. The biggest challenge is that I’m lonely and sad…can anyone relate?

In your comedy and on Seek Treatment, you’re very open about your personal life, discussing dating, body issues, mental health, and anything else that’s on your mind. Do people who know you personally ever judge you for being so honest? How do you respond to this?

You’ve spoken before about how the comedy character of Catherine Cohen is a heightened version of your real self. Do you ever feel a burden to maintain the performance of this character outside of your comedy, in your regular life?

I’m only now learning how important it is for me to have time alone where I can just chill and not try to make anyone laugh. Obviously, I hate being alone (very healthy!), but if I’m too burnt out and exhausted, I won’t be able to write and perform. Now I spend lots of nights in—I like to watch murder shows, eat popcorn, get texts and ignore them, drink inhuman amounts of CBD seltzer, which does nothing but tastes good actually.

The observations you make in your comedy really hit on something so real about being a young woman navigating life. Can you speak about your writing process?

I just write whatever is on my mind. My new therapist says “you can’t solve an emotion” (rude), but that’s what I try and do through my writing. And if nothing is coming, I don’t try and force it. I just kind of stream of consciousness vibes until something makes me giggle alone in my room.

During quarantine, you started a newsletter—My Sexy Little Email. All proceeds from the subscriptions go to The Loveland Foundation. Can you tell us a little more about why you chose this organization?

Yes! Therapy has been huge for me and The Loveland Foundation is an amazing organization that funds therapy for Black women and girls. Everyone deserves access to therapy, particularly Black women and girls who often face discriminatory barriers when it comes to getting the healthcare they need.

Can you speak about the importance of being so open about your experiences?

It’s very therapeutic for me. I don’t know where I’d put all this shit if I didn’t have some kind of outlet. It’s just how I process things and how I cope with being alive. I know how other writers have helped me feel less alone, and that’s what I kinda hope to do when people read my stuff. There’s so much that we think is embarrassing, but isn’t, cause we’re all feeling the same stuff.

Tags: Catherine Cohen , female comedians , God I Feel Modern Tonight , Seek Treatment
Support Feminist Media!
During these troubling political times, independent feminist media is more vital than ever. If our bold, uncensored reporting on women’s issues is important to you, please consider making a donation of $5, $25, $50, or whatever you can afford, to protect and sustain BUST.com.
Thanks so much—we can’t spell BUST without U.