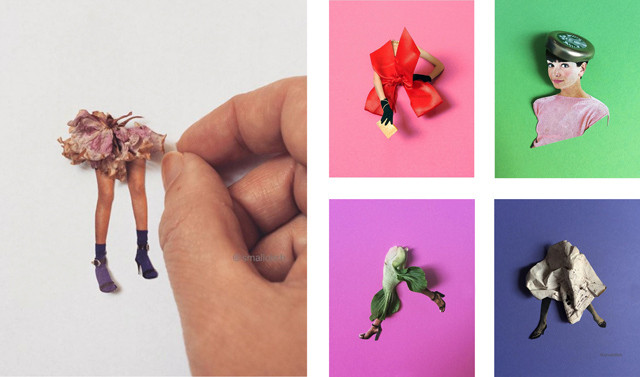 Martha Haversham will forever change how you see street trash—the U.K. artist designs high-fashion outfit collages using litter. With the help of scissors, paper, glue, and staples, a cupcake wrapper becomes a pleated skirt, sugar packets are made into cropped pants, and a wilted strawberry top is transformed into a delightful fascinator. She works on the floor while listening to music, then captures her work as a still-life photograph. “The found object always dictates the outfit,” Haversham explains of her series called “Smallditch” (also her Instagram handle and a play on Shoreditch, the name of an artsy London neighborhood). “I will immediately see the garment. I don’t want to do anything forced—the object is used as found.”

Haversham transforms natural objects too, turning flower petals, dried leaves, and tiny feathers into gowns, collars, and incredibly elegant sleeves. She’s particularly inspired by the Victorians’ love of nature, and specifically, Pteridomania, the 19th-century British craze for ferns that gave women a means for creative expression and social freedom because “fern hunting” was often allowed sans chaperone. Other influences are equally significant. “I have a muse, my much-loved Palitoy Pippa doll,” Haversham says. “She is a pocket fashion dolly from the 1970s, and my collages are built around her proportions.” Her parents were also hugely influential. Haversham’s mother was a ballet dancer—the artist has her own dance degree—and her father a photographer. “He worked for Vogue in the ’50s and ’60s, and introduced me to the photographs of Irving Penn and Norman Parkinson, to name two,” she says.

When asked about what she wants viewers to take away from her work, Haversham says, “First, relatability; we all wear clothes. Second, speed; I work spontaneously, so I like to get my work ‘out there’ for a reaction. I am interested in this concept both technically (collage is quick) and socio-environmentally, given the appetite to consume imagery and products.” Playfully exploring what it means to add value to seemingly worthless items is an undercurrent throughout her work: “I enjoy making attractive images out of discarded natural beauty and trash.”

As for her future plans, Haversham says she’s found “a rich source of fabric” in the plastic garbage people leave on beaches. Perhaps we’ll glimpse that collection soon? In the meantime, the artist declares, “I will keep my head down and find my treasures, knowing that my best image is still to come.”