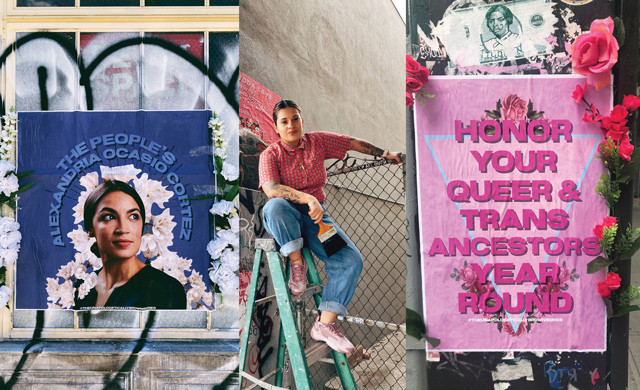 In a place like the U.S., where the stories of queer people of color are continually erased, 30-year-old artist Johanna Toruño aims to center and celebrate them. Born in El Salvador, Toruño was displaced by war and migrated to the U.S. at age 10. After being incarcerated as a teen and spending three years on probation, she began searching for ways to express herself and connect with others. “Having these experiences of displacement and not speaking the language, and then having the experience [of] living as a queer migrant in this country, forced me to find a way to communicate with folks who have similar feelings,” she says. So, in 2016, she founded the Unapologetic Street Series (theunapologeticstreetseries.com), a multi-media public art venture and community project created by and for people of color, specifically queer POCs.

The idea first began on SoundCloud, where the Latinx artist recorded her own spoken-word poetry. Wanting to do something more radical and familiar, she drew inspiration from the political street art that she saw in El Salvador. “Growing up and seeing all of that work, and also seeing all of the violence, stayed with me,” she says. “So, for me to put up a poster on the street is perfect, ’cause I can put it up and it can have a life of its own.”

“I want kids to grow up in a world where they see queer art and they see powerful revolutionaries taking up public space, because we remember them.” 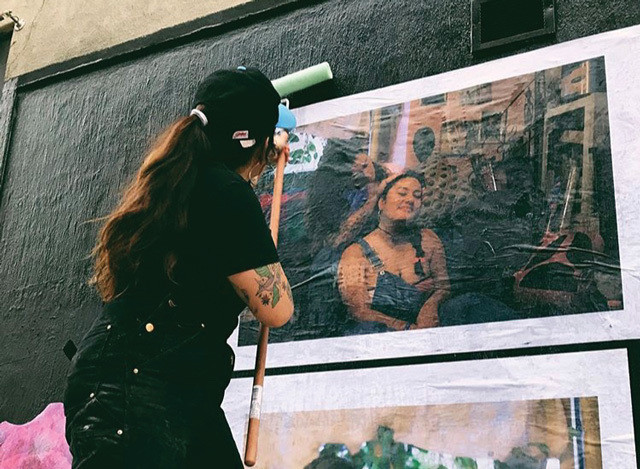 Now based in D.C., Toruño has also taken to the streets of N.Y.C. and L.A., putting up posters that make powerful statements—like “Honor Your Queer & Trans Ancestors Year Round.” She often uses the Unapologetic Street Series to take a stand on political issues, such as police brutality, and to honor important women of color, like New York Congresswoman AOC and trans icon Marsha P. Johnson. Some of her other projects include community workshops, a TEDx Talk, and a special trio of posters she titled Niñas Sin Vergüenza (Girls Without Shame)—depicting Toruño and her partner in three intimate, non-sexualized poses meant to convey pure, unapologetic love—that she pasted on the Lower East Side of Manhattan in 2018.

Through her art, Toruño hopes to start a conversation and inspire queer people to not only create their own content, but also share the realities of their lives. “I want folks to have their own experiences with the work, [and] maybe encourage them to look further into what they’re seeing,” she says. “I want kids to grow up in a world where they see queer art and they see powerful revolutionaries taking up public space, because we remember them.”

Tags: Johanna Toruño , street art , AOC , Marsha P. Johnson , New York City , queer POC
Support Feminist Media!
During these troubling political times, independent feminist media is more vital than ever. If our bold, uncensored reporting on women’s issues is important to you, please consider making a donation of $5, $25, $50, or whatever you can afford, to protect and sustain BUST.com.
Thanks so much—we can’t spell BUST without U.