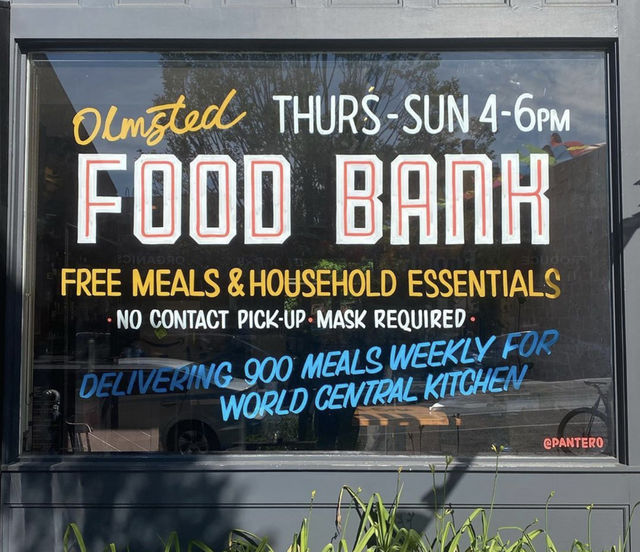 I first became aware of the artist/sign painter Olive Panter when I saw her 6 FEET MEANS 6 FEET signs up in a row of residential windows in my neighborhood back in March, when the pandemic hit hard here in Brooklyn. Soon afterwards I noticed a new hand painted sign on the same block at a restaurant that was offering free food for covid-impacted restaurant workers. I wondered who was making these great signs and found out it was the 29 year old artist. Since I love traditional sign painting, and we are practically neighbors, I reached out and asked if we could “meet” on zoom to chat about her work.

Olive is the daughter of famed Art Director Helene Silverman (Metropolis) and artist Gary Panter (RAW, set designer for Pee Wee's Playhouse). She grew up in Brooklyn, and attended Cooper Union and more recently Trade Tech in LA, which is the last sign painting school left in America. She has since moved back to Brooklyn.

Since March Olive has done lots of other hand painted storefronts in Brooklyn, as well as #BLM related pieces, so keep an eye out for her work or follow her on Instagram.

I live right across the street (from the restaurant Olmstead) and I saw that they were still open when everything was closing and I was actually getting really angry that they were still open. I was watching people go in and out and not social distancing. I made friends with the woman who runs the restaurant downstairs through my window, which has been like a very funny Avenue of community facilitation because I started smoking again within the pandemic. I just sit there and talk to people on the street all the time.

She told me that Olmstead was doing restaurant relief and I was like, Oh, okay. So they're doing good stuff, it wasn’t totally obvious. They were looking for someone to make them a sign and they probably would have just installed vinyl if I hadn't inserted myself in the situation.

I'm so glad you did, it looks great. How did you get into sign painting?

I got my BFA from Cooper in 2014, and my work always revolved around language and communication, women and gender and trauma. And I've always been super into signs. Like, you know, my dad was a cartoonist and a painter. My mom's a typographer, so it very much added up to me being who I am. Then I moved to LA because the last sign painting school in the country, Trade Tech is there. They have an insane [sign-painting] program there that the same dude’s been teaching forever. He's in his late seventies, his name's Doc Guthrie. He was a civil rights activist, and I'm a loud Jewish woman from Brooklyn! (laughs)

Community college was my way of trying to get an MFA that I would build with no core cohort or critique structure, but with community college prices. But I didn't really bargain on all of a sudden having an actual trade.

Oh yeah, yeah, totally absolutely. And it's like any other system, you know…

We just don't hear about them.

Yeah, exactly. Betty Willis, the person who designed the Las Vegas sign was one of the most prolific neon designers, her drawings are just mind blowing.

There have always been women sign painters, but how new is the advent of women being allowed to go out and work on their own? I mean at least in a commercial industry like that, it's from World War II, you know? Sign painting is super, super old. But yeah, in terms of women's liberation, that's such a new thing that it's still a weird trickle down system. But in terms of Trade Tech, the program had almost died in the early 2010s but people started getting more into sign painting again, I think that it's related to kind of more of the farm to table stuff and you know, hipster aesthetic. 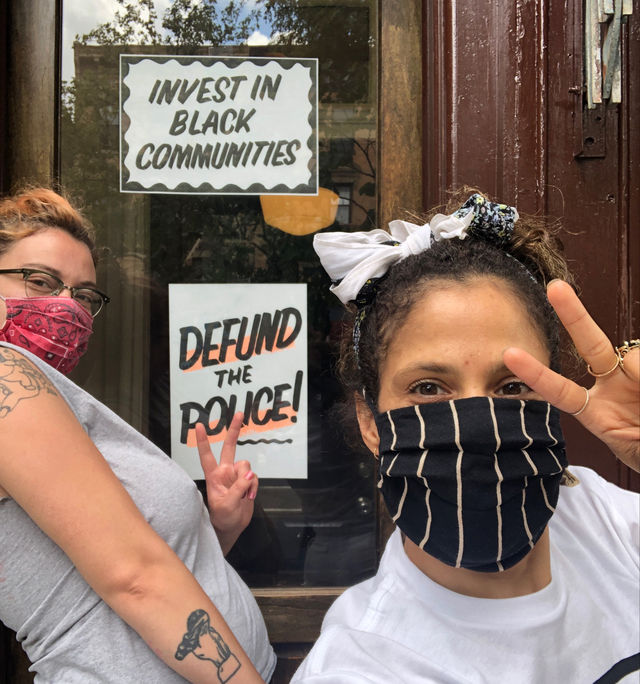 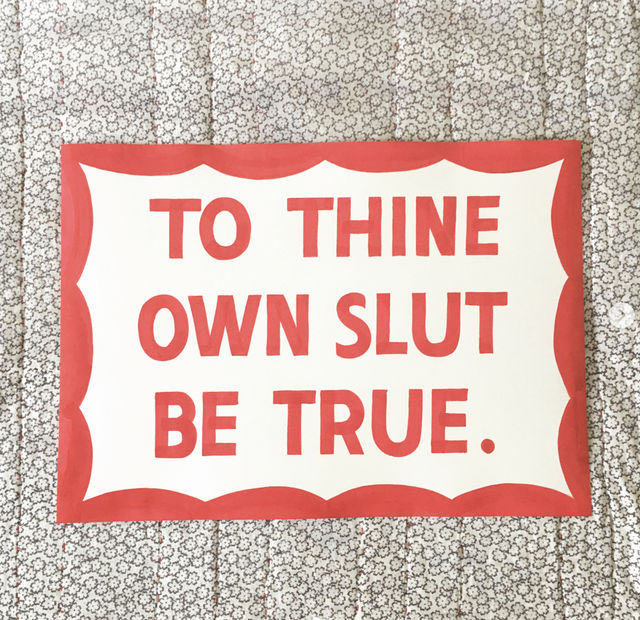 And people being sick of digital, digital all the time.

Yeah. And postmodernism, you know, like what comes after that? There's only so much institutional design and industrial design that a person can take. So the school really had a giant resurgence. And now they have too many kids. They have like 70 kids per semester but it's really a program built for like tops, 15 people. But there are ton of women in my class. And each semester that I took there were more and more women and l'd say that the gender divide is getting close to 50/50 at this point. 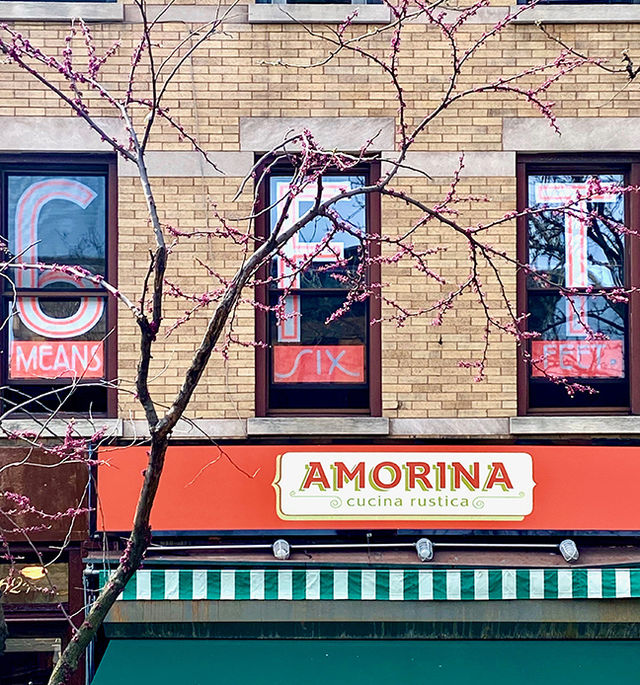 I was just watching all of these people not taking this seriously enough. And I hadn't left my house in a month or something and my mom was like, “You need to go for a walk!”

So, I went for a walk and I immediately started sobbing because no one was respecting my space. And I had PTSD for a long time from being raped and it was like very much me having gotten to this place where I understand my boundaries and there was absolutely no way that I could vocalize them enough for someone to pay attention. And it was a really funny thing. People will give you a six feet clearance if you're sobbing in public. That's the thing that I learned. I think in my head I was like, no, it means no. Six feet mean six feet. Now is the time to turn my trauma into a PSA and you can see it on the street who's jumping out of whose way, you know, it's very clearly luckier people not giving enough awareness to more or less lucky people.

I feel like your next sign/window should be “Wear a fucking mask!” because I'm really annoyed with that!

My next sign ­—once I got time to do it, which at this point will be a month, but it'll still fucking apply because we're about to go straight into another surge— is “Privilege, won't save you, but it's hurting your community.” I got a bunch of big gold leaf to do it. That'll be an interesting experiment. 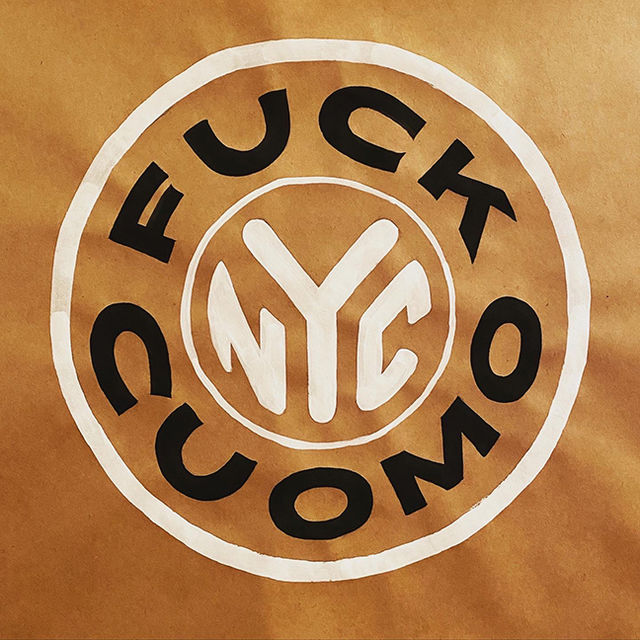 Tell me about the Fuck Cuomo T-shirt?

It started actually from the New York Nico best New York t-shirt contest. So there was this one tee shirt submission that was Cuomo and Fauchi and it said “New York Tough.” And my brain immediately just went to “New York abusive!” Fuck Cuomo.

Budgets passed under Cuomo’s long-term authority have shuttered public hospitals in low-income areas and we’re watching the results of this play out in real time with shortages of beds for those infected and heart-breakingly higher death rates in minority populations across the state. As a result of the ACA, more NY’rs were able to access health care than ever before, putting strain on state budgets. Instead of raising taxes on the wealthiest NY’rs to fill these gaps, he proposed cutting Medicaid and funding to H+H public services in this year’s budget, attempting to pass them DURING the pandemic. This was put on hold after his changes threatened NY’s eligibility to receive emergency federal funding, but was re-written with language that carefully ensures once this is over, he can still make those cuts without penalty. He did manage to quietly roll-back last year’s cash bail reform, which disproportionately keeps black and brown folks in increasingly high-risk, abusive systems. Cuomo holds the power to freeze and roll-back rent and has stated that it’s been handled. It has profoundly not been handled. After being threatened by a Working Family’s Party campaign last election cycle, he enacted higher thresholds for third-party candidates to make it onto ballots, effectively stymieing NY progressives’ ability to enter a two-party system that doesn’t represent the desires and needs of large swaths of its constituency. He has refused any institutional help to NYS’s large population of undocumented workers, stating it is a federal job, even though the president built his campaign on racist rhetoric, even as Cuomo parades on TV as the president’s foil, even as many undocumented folks continue essential work they will not receive benefits for. He’s demonized the unhoused class, which overwhelmingly relies on a functioning NY economy and social system to trickle into their pockets and mouths, creating a false dichotomy between the homeless and essential workers, who are all hi-risk and need more help and safety-nets than those of us able to stay home.

I was really mad and I was like, okay, I can paint this thing. I can raise money. We’ve raised close to 4k to be split evenly between the Coalition for the Homeless, NYLSC which is a youth undocumented led coalition that funnels money directly towards undocumented families in need, and the National Bail Project.

That’s great! Well in these difficult times, you’ve certainly brightened up the neighborhood with your signs.

Olive: Honestly, it's all hard and everyone's exhausted and I'm so happy to be here. There's nowhere else I would rather be than here.

All images courtesy of the artist. 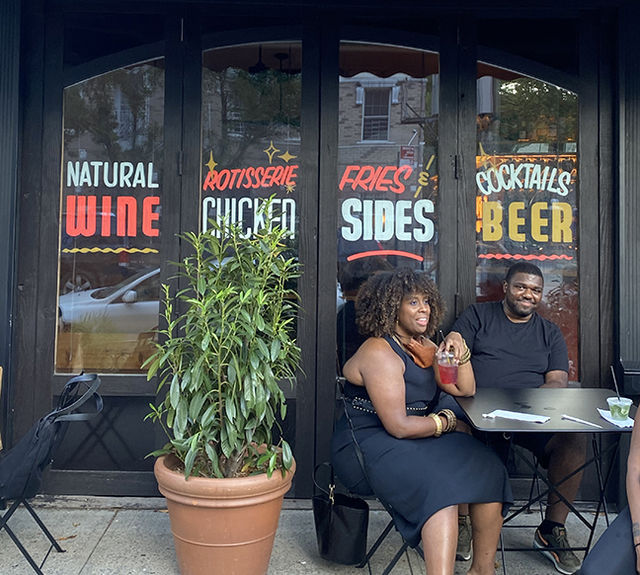 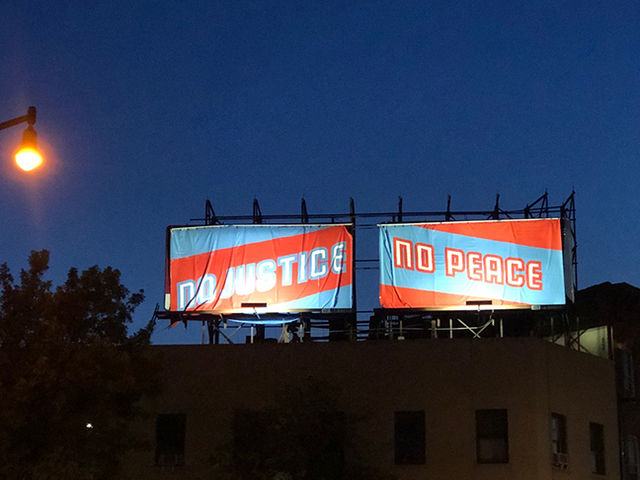 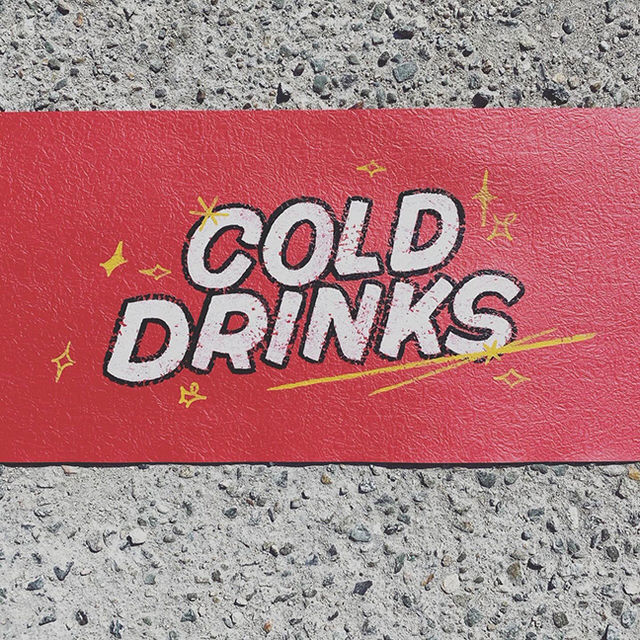 Tags: sign painter , Olive Panter , artist , activist , Brooklyn , Cuomo , politics
Support Feminist Media!
During these troubling political times, independent feminist media is more vital than ever. If our bold, uncensored reporting on women’s issues is important to you, please consider making a donation of $5, $25, $50, or whatever you can afford, to protect and sustain BUST.com.
Thanks so much—we can’t spell BUST without U.