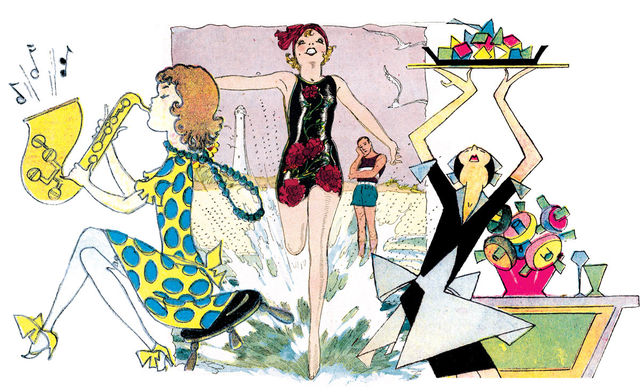 During the roaring ’20s, cartoons featuring flappers were all the rage. And some of the best were actually drawn by the era’s most talented women

WHEN FLAPPERS TOSSED their corsets and shore their locks in favor of short, slinky dresses, crisp bobs, and bold cosmetics in the 1920s, they introduced the world to the modern woman. These middle- and upper-class young ladies, newly armed with the right to vote and opportunities to work outside the home, were free in ways previous generations could only dream of. They proudly thumbed their noses at the bourgeois conventions of American life, openly defied social and sexual norms, and gleefully made art documenting their glamorous lives. But while men like F. Scott Fitzgerald are known for chronicling the lives of flappers in print, there was another category of folks putting pen to paper and illustrating these lives at the same time: female cartoonists, many of whom were flappers themselves. Their comics not only echoed the culture, they also informed it, helping to shape the aesthetics, aspirations, and dreams of millions of young American women. 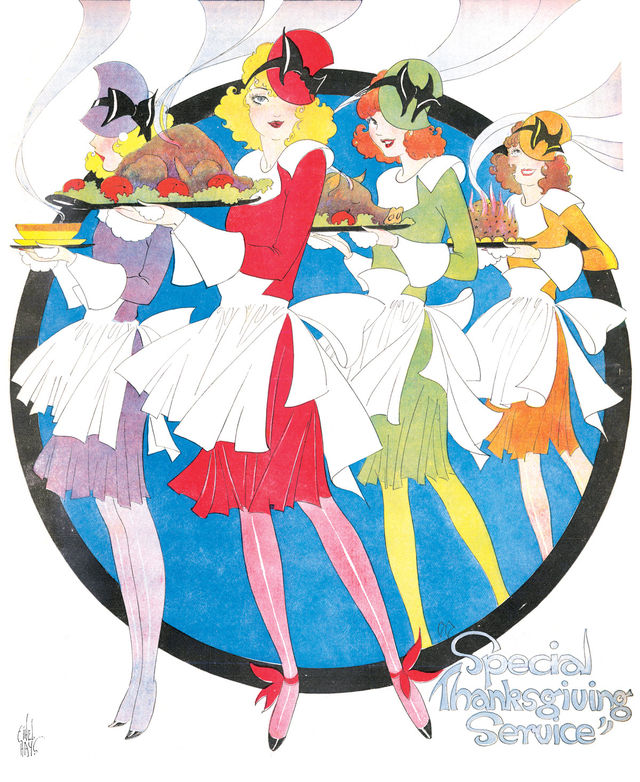 “The newspaper was where you found out what was going on at that time, and contrary to what people think, there were lots of women drawing comics for the newspapers,” says Trina Robbins, author of new book The Flapper Queens: Women Cartoonists of the Jazz Age, out July 7 from Fantagraphics. These rising art stars—including Nell Brinkley, Eleanor Schorer, Edith Stevens, Ethel Hays, Dorothy Urfer, Fay King, and Virgina Huget—would establish themselves as some of the most influential illustrators of the day, thanks to their strips’ popularity. “There’s this myth that women didn’t draw comics or that they had to change their names; this is untrue. If you were good, they published you,” says Robbins. “Women were drawing comics and people loved them. Just as many women read newspapers as men, and the editors were smart enough to carry the strips the women liked.”

Women of the ’20s reclaimed the title “flapper” from a slang term previously used to describe both very young prostitutes and theatrical dancers. But by the time the Charleston craze hit the nation in 1923, the word flapper had transformed into the perfect description of a young woman who had mastered the dance’s high-speed, flapping arm movements. It was also at that time that comic strip flappers became the go-to heroines for readers of daily newspapers, offering a captivating glimpse of a new female archetype: a liberated creature free to indulge her every whim and fantasy. “As a feminist and a historian I am fascinated by the ’20s, because if you take pictures of women from 1915 and compare them to photos of women from 1925, the 1925 women are smoking and drinking, putting on makeup, wearing dresses that go above the knee,” says Robbins. “While in 1915, any woman who did that would have been considered loose.” 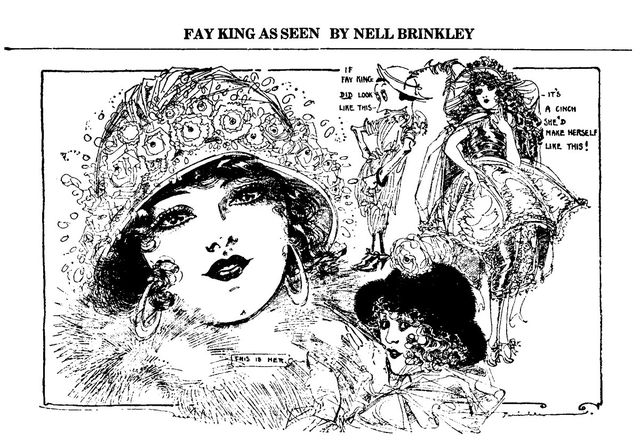 The flapper comics inspired and empowered these newly liberated women. One of the most prominent cartoonists of the time was Nell Brinkley, and in her strip, Dimples’ Day Dreams, the heroine imagines becoming an aviator, a futurist artist, a chorus girl, a movie star, a socialite, and President of the United States. “Before women got the vote, there were anti-suffragist cartoons, and feminists were portrayed as these dour, ugly old maids,” Robbins says. “Then women got the vote and Dimples fantasizes she is President; she is cute as a button and she’s even wearing a pantsuit!” Brinkley herself was something of a cartooning prodigy. Already an accomplished illustrator by age 16 in her native Denver, she was recruited by newspaper mogul William Randolph Hearst when she was 21, moved to Brooklyn with her mother, and went on to illustrate for newspapers and magazines for almost 40 years.

The Hearst syndicate was also home to another darling of the flapper comics scene who would later collaborate with Brinkley. Just as adventurous as the flappers she drew, Fay King was one of the first women in her hometown of Portland, OR, to drive an automobile. And when she divorced her famous boxer husband Oscar Matthew “Battling” Nelson in 1916 at 27, it was a scandalous event widely covered in the press. By the time the flapper craze came around, King was based at Hearst’s San Francisco Examiner, where she became an early creator of autobiographical comics. She depicted herself as a flapper with an independent spirit, clever banter, progressive women’s-rights ideas, and an Olive Oyl silhouette, long before Popeye creator E.C. Segar popularized it. Her gangly, big-footed avatar appeared in a crossover with a Brinkley comic in 1924 in which Brinkley drew King and offered these words, “Don’t you worry about that pic of her she makes…. She tells the truth about everything but her own self.” 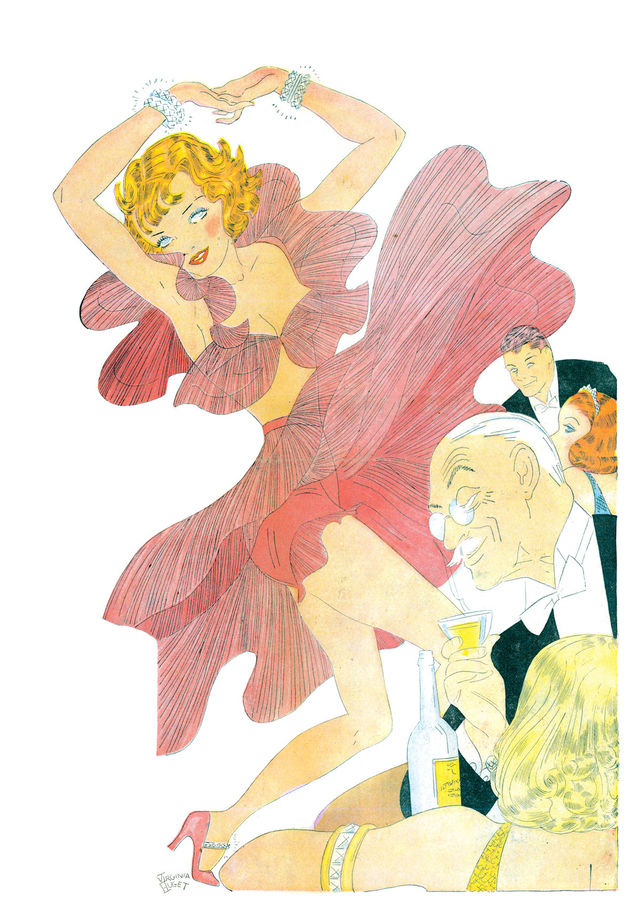 Unlike Brinkley and King, who were both well into their 30s when the flapper craze took hold, Virginia Huget, who first started publishing in 1926 at age 27, was more of a contemporary of the young, liberated women she became famous for illustrating. A graduate of the Art Institute of Chicago, she was perhaps the flappiest of them all with her euphoric figures drawn with sharp elbows and knees, as was the fashion. Unlike the other strips, Huget’s girls came from working-class homes. There was Molly the Manicure Girl (1928), and Babs in Society (1927), a department-store clerk who unexpectedly inherits a fortune and is thrust into café society. “The flapper was a star at the dawn of pop culture,” Robbins says. “She was a revolution. She was free. She was in control.” 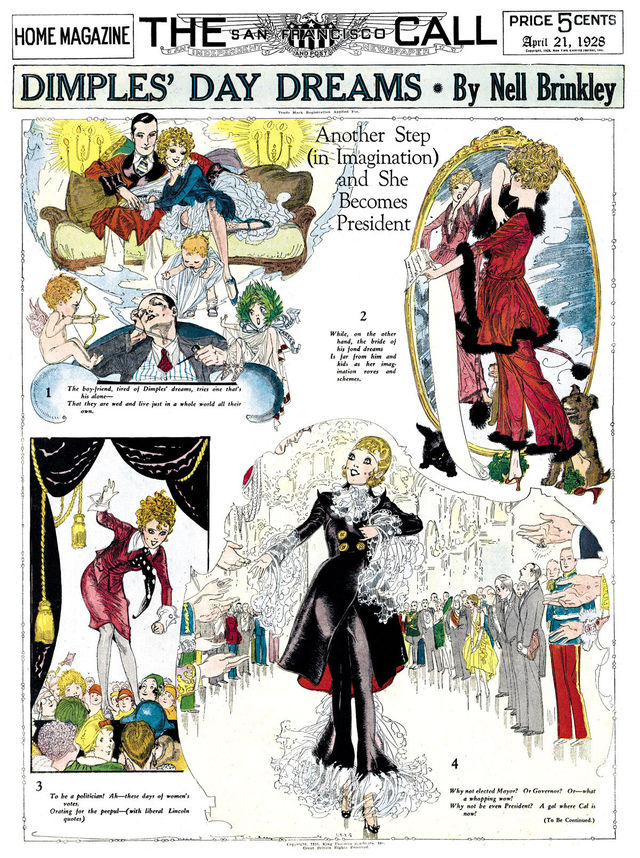 Nell Brinkley’s “Another Step (in Imagination) and She Becomes President” from “Dimples’ Day Dreams,” 1928 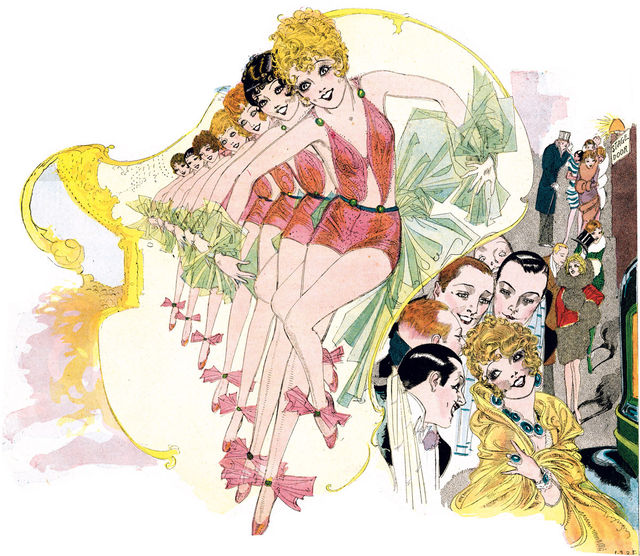 As the popularity for women-centric strips rose throughout the ’20s, some publishers started recruiting female artists from unexpected places to meet demand. In 1923, H.B.R. Briggs, editor of the Cleveland Press, sent 31-year-old artist Ethel Hays an invitation to work at his paper after he saw some work she had submitted to a cartooning correspondence course. Hailing from Billings, MT, Hays taught painting to convalescing soldiers in Army hospitals during World War I, and it was those soldiers who first introduced her to comics. Once established, Hays was extremely prolific, producing a daily panel, Flapper Fanny Says, and a one-panel comic, Ethel. Her flappers were on the cutting edge of radical chic, their daring style matched only by their bravado, pluck, and willingness to openly confront the passé mores of patriarchal society.

In a similar vein, Edith Stevens—the only woman cartoonist at the Boston Post— got her start when she entered the paper’s cartoon contest at age 29 in 1928. Although she didn’t win the $50 prize, the Post scooped her up and put her on staff, starting her on a career that would last nearly four decades. Her daily comic, Us Girls, was dedicated to women’s fashions, hairstyles, and pithy commentary on current events. Although she started Us Girls just seven months before Black Thursday, Stevens’ comics brilliantly captured the last hurrah of the flapper era.

Ultimately, the Great Depression put an end to the flappers’ youthful frolics, but these groundbreaking artists kept working, albeit on different subject matter. “When you make gains, you try to keep them. You don’t go back,” Robbins explains. “Maybe she couldn’t dance the Charleston anymore because she was too busy earning a living—but the flapper generation opened the door. The women now knew what they could do. They had to stand up for themselves and they did. They were proud of it.” 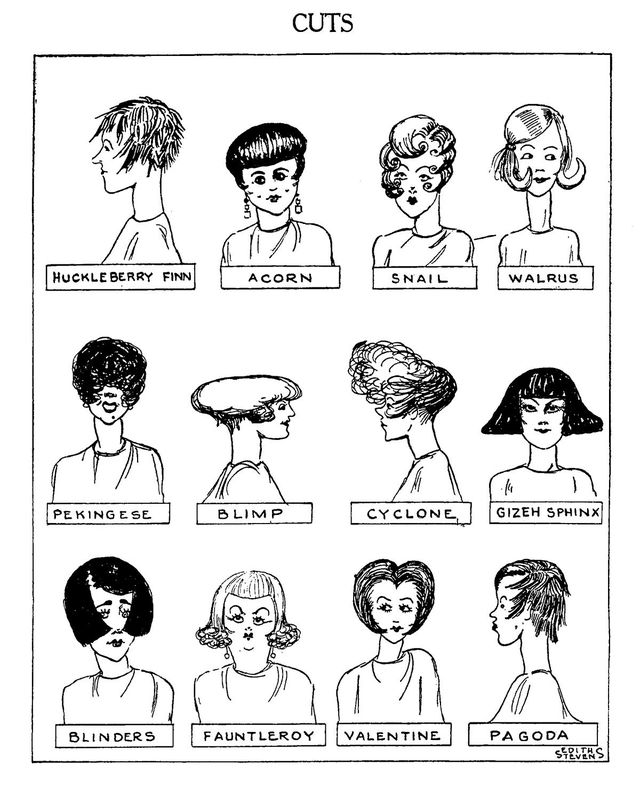 Images courtesy of The Flapper Queens: Women Cartoonists Of The Jazz Age by Trina Robbins, Fantagraphics, 2020