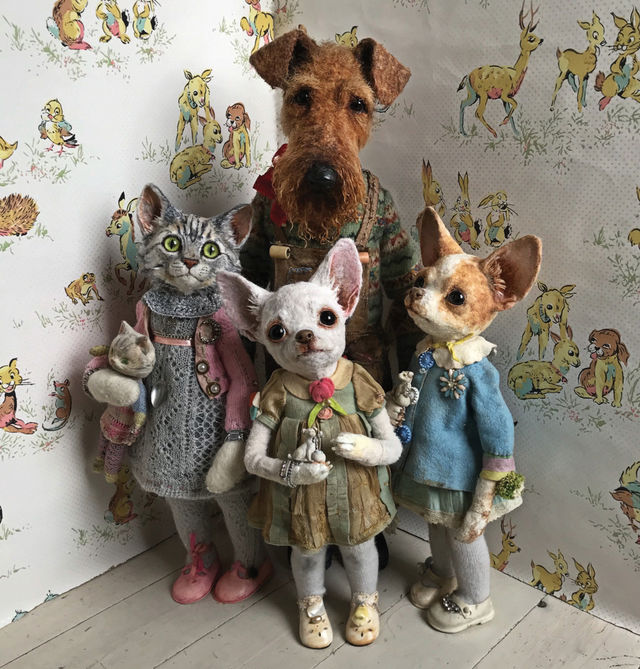 LOOKING AT ANNIE MONTGOMERIE’S pieces for the first time can be a bit disturbing. Her dolls—figures such as cats, dogs, cows, and bears—have such realistic-looking faces, you may think they are taxidermied. “I’ve had people ask if they were real quite a few times,” confirms Montgomerie. The mixed-media artist living in Dorchester, England, has been creating these pieces, displaying them in galleries, and selling them on Etsy, for the past six years. They can cost anywhere from $850 to $2,500 each, and are frequently snatched up moments after she shares their pictures with her almost 65k Instagram followers.

Montgomerie creates her figures with mostly recycled materials—old dolls and doll clothes, for instance, that she finds at flea markets and second-hand shops. She sculpts a new head for each doll—which range from 16" to 25" tall—then layers fabric on top to create the figure’s face. “I use lots of different textiles to achieve the desired patina for the head,” she says. “The process is quite time-consuming.” Although she works on more than one figure at the same time, each individual doll can take from one to two weeks to make.

The clothes are sewn by Montgomerie herself, or upcycled from old doll’s clothing. She makes them out of a variety of fabrics, preferably vintage, but that’s not all she works with. “I have used old rubber swimming caps, beach balls, leather gloves, and vintage toys—if I can get a needle through it, I’ll sew it,” she says.

“Childhood is a magical place with magnified emotions, and I try to capture this in my work.” 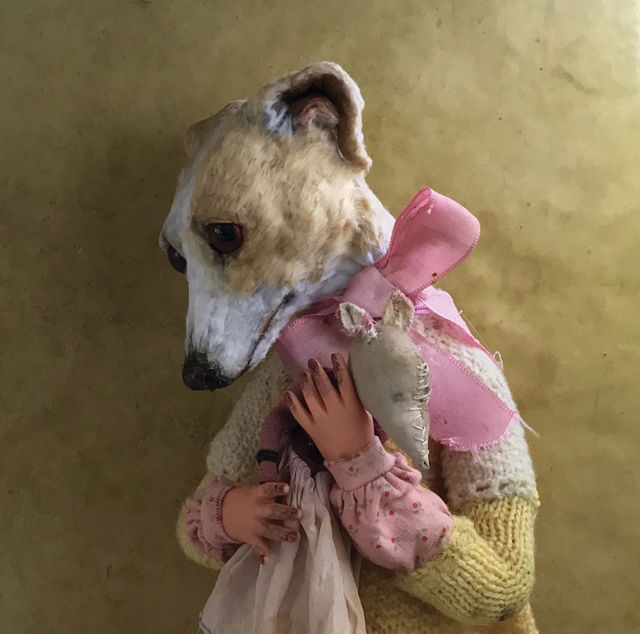 Her figures often carry tiny versions of themselves—cats hold miniature stuffed kittens; a dog clings to a well-worn primitive doll in the shape of himself—signaling that these creatures are young and innocent. Yet they also look somehow world-weary and forlorn. “I want my work to evoke memories of childhood, and all the emotions one has as a child—feeling awkward or inadequate, disappointed, or upset, but also cheeky, hopeful, and happy. Childhood is a magical place with magnified emotions, and I try to capture this in my work,” she explains.

Adding to the figures’ emotional pull is the fact that they seem to come from the past; that they already have a long, long history. Some outfits appear to be straight from the depression era; hearkening to a simpler time, when children played with dolls rather than screens. “I love looking at old school photos, a class of slightly glum looking children maybe wearing an itchy jumper or a moth-holed skirt,” she says. “The era between the 1930s to the 1970s is my favorite. This, along with being an avid vintage collector, has a strong influence on how I dress my figures.”

But with so much beautiful detail in every character, each with their own personality and name, is it difficult to let go when they are sold? “I do grow particularly fond of some pieces,” Montgomerie says. “I usually have them on display around my house for a while before they go so I can enjoy their presence for a short time.” 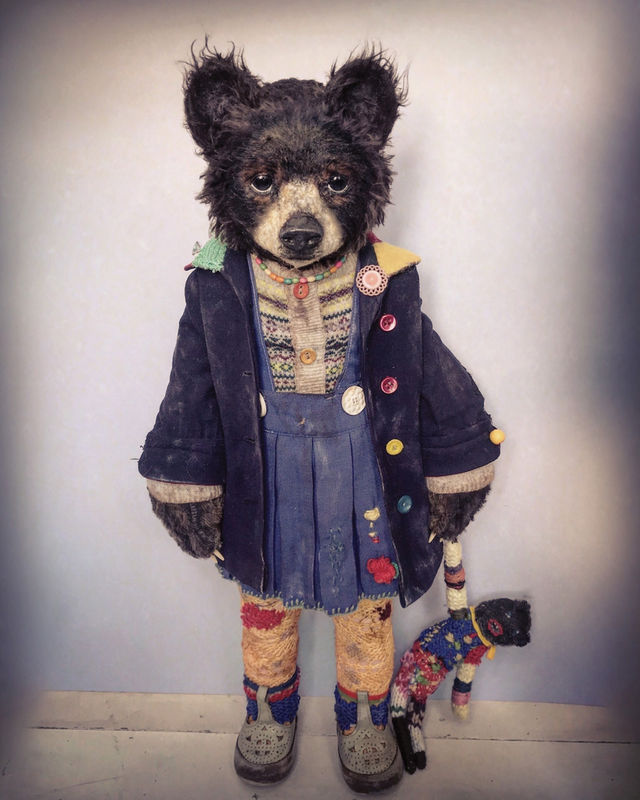