Here’s How Community Members of Spokane, WA Are Responding to the Aftermath of the BLM Protests 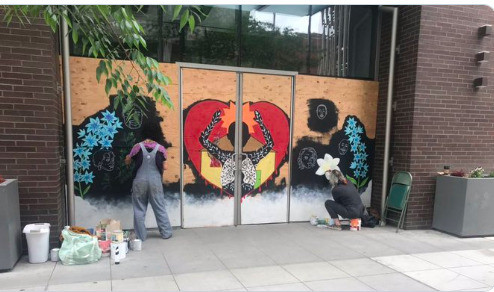 Following the protests occurring throughout the United States ignited by George Floyd’s murder, it is not uncommon to walk down the streets and be met with sights of shattered glass, damaged buildings, and broken windows. Responses to these changes in our cityscapes have been varied: some choose to focus on its destruction, while others have espied it as an opportunity for creativity.

In the wake of protests, there has been a surge of graffiti artists taking to the streets to spread the movement’s message. Boarded-up windows bearing the words “Black Lives Matter,” “No Justice, No Peace,” and “Say Their Names,” have begun to saturate city sidewalks, bringing a touch of beauty to communities that are hurting. 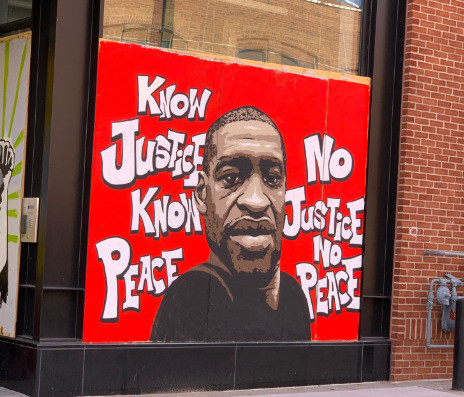 While most of these murals have sprung up organically, Spokane Arts, a women-run non-profit that partners with public and private entities to support the arts in Spokane, WA, decided to take things to things up a level. Executive director Melissa Huggins identified broken storefronts as places to employ local artists and bring some brightness to the city, which has been filled the past few weeks with thousands of protestors and thus borne the brunt of the resistance’s residue.

For the boarded-up entrance to a Nike store downtown, Spokane Arts funded local artists Susan Webber and Shelby Allison to design a mural. These two women, who had already worked together to grace the streets of Spokane with a 160-foot long mural of two women’s bodies, decided to make a memorial for George Floyd, Breonna Taylor, and other victims of police brutality.

This boarded storefront, once a relic of pandemic-meets-protest sobriety, is now covered with the work of this artist duo in commemoration of those who have lost their lives to police violence. The artists made sure to donate the majority of the proceeds from Spokane Arts to Black Lives Matter. Their work, alongside that of many other artists who have bedecked our streets with beauty, serves as a reminder that it takes all kinds to make a movement.

Check out these organic murals that have appeared too.

Tags: Nike , BLM , Black Lives Matter , Protests , Graffiti , Murals , Spokane Arts , George Floyd.
Support Feminist Media!
During these troubling political times, independent feminist media is more vital than ever. If our bold, uncensored reporting on women’s issues is important to you, please consider making a donation of $5, $25, $50, or whatever you can afford, to protect and sustain BUST.com.
Thanks so much—we can’t spell BUST without U.