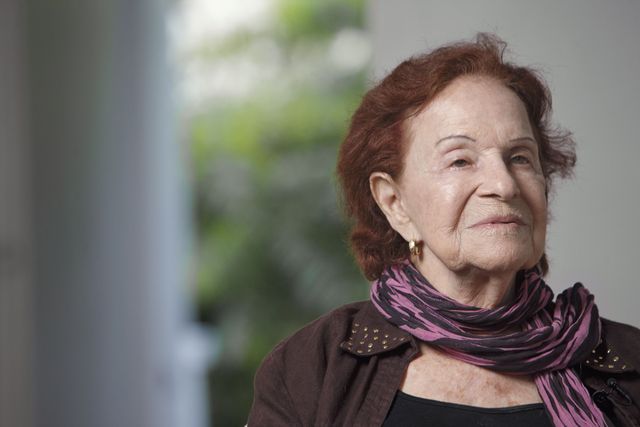 The first time I experienced Zilia Sánchez’s artwork was in 2018, and I’m furious about it. Lot 250: El silencio de Eros (Antigona) rose off the stark wall as if animate with breath beneath the canvas “skin.” (Sánchez calls the surface “bodies” of her signature stretched paintings.) There, showing briefly in a Sotheby’s contemporary art auction, before transferring from one private collection to another, I saw her. Lines, distinct as sculpted marble, formed a whisper of the tragic mythological figure Antigone. Her presence a flushed pink against a steely blue, silent no more. I heard her, felt Sánchez’s hand pull me toward the epic form, hanging 72 x 41.2 x 9 inches; one in her series Topologías eróticas (Erotic Topologies). Sensual. My heartbeat in my ears. First, I felt awe, then fury. The piece before me was dated 1990. How had I not encountered Zilia Sánchez before?

At age 93, Sánchez, who currently lives and works in San Juan, Puerto Rico, has been making abstract art for decades. Long overlooked, her first retrospective of over forty bodies of work is now showing at the El Museo Del Barrio. Soy Isla (I Am an Island) showcases artwork by the prolific Cuban artist from the 1950s to present, including her stretched canvases, paintings, works on paper, sculptures, graphic illustrations, and ephemera.

“There’s a current fetish of the elderly artist,” Susanna Tempkin, Curator for El Museo, says in an interview, noting Sánchez long overdue recognition, along with noting Carmen Herrera and Luchita Hurtado’s lauded exhibition, I Live I Die I Will Be Reborn, now showing Los Angeles County Museum of Art (LACMA).

“It is my responsibility,” Tempkin continues, “to stop the phenomena of discovering artists in their nineties. We are overdue to celebrate these figures. But it is our responsibility to be providing support, especially to women artists, who have systematically and institutionally been neglected, and to start really embedding that in our practice of looking at their work, while they are younger, and helping them by creating platforms to support them in our institutions.”

Born in Havana in 1926, Sánchez learned to love painting sitting beside her father, who she describes as a “Sunday painter.” She was mentored by her neighbor Víctor Manuel, a first-generation vanguard Cuban painter. She grew to become an artist, exhibiting at the revolutionary Sociedad Cultural Neustro Tiempo and prestigious salons in Cuba. 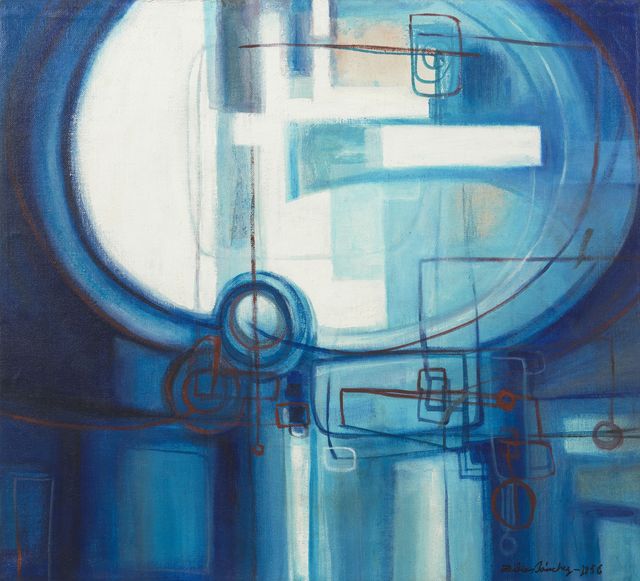 Upon her father’s death, in 1955, the vision for her signature sculptural paintings was inspired by a bedsheet, drying in the wind on rooftop of her childhood home, blown around a pipe the fabric retained its form. Sánchez applied that technique to stretching canvas around armatures and then painting the geometric surfaces. Material holding shape became Sánchez’s medium to explore concepts, indicated by the titles of works and series, of loss, silenced women, cycles of the moon, and the topology of eroticism.

In Embodied Spaces of Zilia Sánchez, the exhibition’s accompanying catalog, Dr. Vesela Sretenović, the lead curator for Soy Isla, describes Sánchez’s work as “lingering between the intimate and the epic.”

Under Tempkin’s curation, the Soy Isla retrospective diverted from the exhibition previously shown at The Phillips Collection in Washington D.C., and Museo de Arte de Ponce in Puerto Rico. Instead of presenting the work chronologically, El Museo presents a more thematic grouping of heroines and women warriors, tattoos, many moons, a self-portrait, and vitrines quietly showcasing poetry books Sánchez contributed illustrations and covers to in the 60s and 70s, one on Cosmic Feminist Poetry. 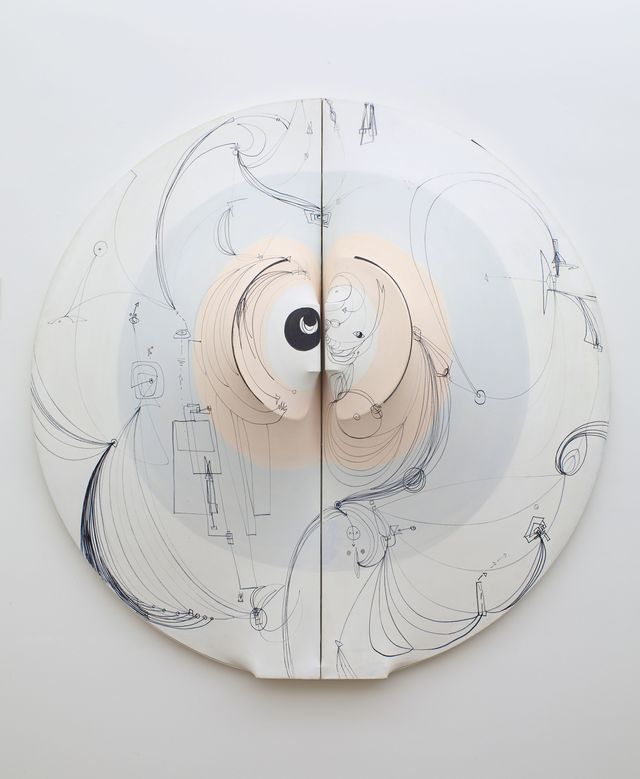 Like two plumes of smoke rising on a bright day, Juana de Arco (Joan of Arc) (1987) features two painted panels billow nearly to the ceiling. The immensity of the body brings to mind the historic magnitude of the title’s heroine, and as I look closely at the curves, crevices, lips, and nipples, the sensation of surveying the landscape around the open legs of a love with whom I want to forget time.

Lest I read too much into the artwork based on my own point of view. In her essay, “Decoding Homotextuality in the Work of Zilia Sánchez” Carla Acevedo-Yates, associate curator at the Eli and Edythe Broad Art Museum, delves into the idea of a work’s narrative being coded with sexuality.

“A homotexual work is one that, although it may not be intentionally created as homosexual, reveals a complex, codified hermeneutics in which desire and sexual and gender difference are inscribed,” she writes. Homotexuality, a word coined by Rudi C. Blyes in Images of Ambiente: Homotexuality and Latin Art 1810-Today (2000), embraces artwork’s potential “reception as a site of homosexual meaning,” regardless of the overt intentions of the artist. 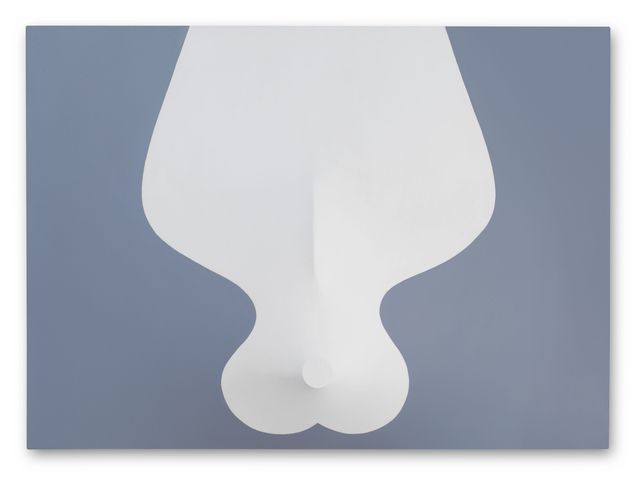 Sánchez, who identifies as queer, once referred to her paintings as bisexual. She calls herself una furia, a fury, in an interview with Sretenović, joining the howl of contemporary feminist artists declaring that “eroticism is a pledge of equality and gender liberation, a power to speak.”

Zilia Sánchez: Soy Isla (I Am an Island) will be on view until March 22 at El Museo Del Barrio. Curated by Dr. Vesela Sretenović, Phillips Senior Curator of Modern and Contemporary Art // Organized by The Phillips Collection, Washington, DC.

Amy Deneson is a writer in New York. Her essays have also appeared in The New York Times Modern Love column, The Toast, Salon, The Observer, and Curve magazine, among others. She has recently completed a memoir about growing out of the purity culture. Follow her on amydeneson.com.
Tags: Zilia Sánchez , Cuban artist , visual arts , LGBT