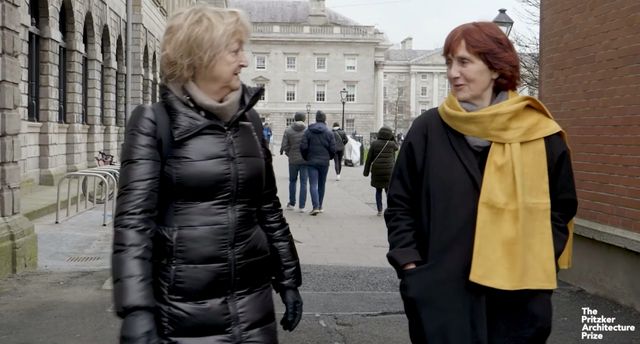 Yesterday, Yvonne Farrell and Shelley McNamara became the first women ever to win the Pritzker prize. Often referred to as the Nobel of architecture, the Pritzker is the most prestigious prize in the profession. The Dublin-based duo have been cited for their attention to detail, their ability to design both large and small buildings with varying budgets and for their sensitivity to nature.

In an industry that has always been and still is male dominated, this is a huge win for women architects and for women in art and design as a whole. McNamara stated on the topic of their win, “We’re not afraid of monumentality and making important gestures when necessary, but we’re also not afraid to recede and be in the background. We think about a heroic space and at the same time think about how a human being feels in our space. We think about our agenda as being a humanist agenda, and that’s at the forefront.”

These two architects are keeping intimacy and the human experience in mind when creating their work. With the well-being of the residents in mind, the duo designed an inner courtyard for the North King Street Housing bulding in Dublin in order to provide an quiet oasis away from the busy street. When designing the Urban Istitute of Ireland, they mixed various colors, textures and materials in a move to craft a building that was visually appealing for the average passersby. From both their craft and their ideals, it is clear why they won this award. McNamara even stated in reference to their practice, “Architecture isn’t just about design and sophistication and accomplishment, but it’s also about how it makes you feel as a stranger.”

Farrell and McNamara have been working together for the past 40 years and have accumulated many accolades such as the Silver Lion Award. This historic win, however, is huge. But they want you to remember that despite this, it is not about the starchitects behind the architecture they create. For McNamara and Farrell, their architecture is all about highlighting the beauty of the world around us and the connections we all share. “It’s important to remember that the Earth is beautiful and sunlight is liquid gold,” she stated. “A lot of architecture excludes natural phenomena — the rising and setting sun, the power of springtime moving up through the soil."

Tags: Architecture , Pritzker Architecture Prize , Women Artists , Women Architects
Support Feminist Media!
During these troubling political times, independent feminist media is more vital than ever. If our bold, uncensored reporting on women’s issues is important to you, please consider making a donation of $5, $25, $50, or whatever you can afford, to protect and sustain BUST.com.
Thanks so much—we can’t spell BUST without U.