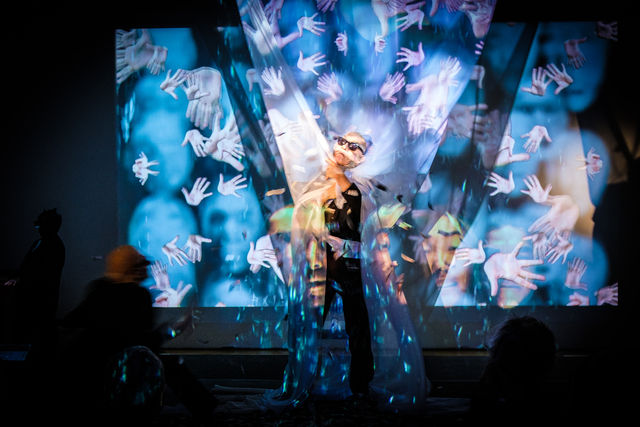 Desire, self-betrayal, displacement, freedom of choice versus fate, sexual violence and power, coping with trauma, the mysticism of religion: God in Three Persons is a zenith in The Residents’ career-long exploration of these themes. As the infamous San Francisco-based rock band and art collective march into their sixth decade of existence, The Residents bring to the stage for the very first time what many fans consider among the best of their vast 60-album discography.

In 1987, before he was able to record his parts for the record, iconic guitar god and quintessential Residents collaborator Snakefinger died suddenly of a heart attack while on a solo tour. The Residents were gutted and had to completely reapproach their aesthetic, as Snakefinger had been around since the beginning. They called on composer Richard Marriott to arrange woodwinds and brass to complete what would have been guitar parts.

It was the last album they recorded to tape before switching to digital and the first album to be released on an exciting new format at the time of its release in 1988: CD. Without the limitations of vinyl, they didn’t feel bound to compose and craft the album around a record flip right in the middle so they wrote something to be listened to from beginning to end without stopping.

Once the record was completed, they had ambitions for its release — an instrumental version of the record, two singles — but the record company wasn’t in sync. Though they performed live and later staged other works, the Residents have never performed God in Three Persons live… until now. They will perform a brand new multimedia staging in collaboration with media artist John Sanborn this weekend at New York’s Museum of Modern Art. This is going to be a treat and a must-see for both fans and newcomers.

Paige Johnson-Brown is a writer, composer, and performer. She leads the country-punk-noise band and art collective Irrevery.