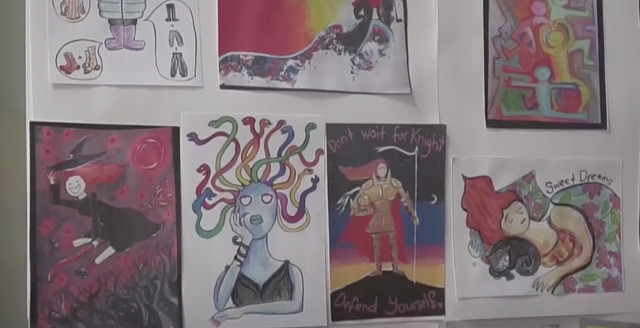 A Russian artist is facing six years in jail for posting LGBTQ+ rights and feminist posts on social media. Yulia Tsvetkova was recently put on house arrest and has been fined 50,000 rubels (or about 800 US dollars) under the charges of distributing “propaganda of non-traditional sexual relations among minors” (despite the fact that her accounts were clearly labled at 18+ due to Russian law) as well as for the “production and dissemination of pornographic materials.”

The 26-year-old theater maker’s accounts featured posts that championed female empowerment, sex positivity, LGBTQ+ inclusivity and body positivity. These charges come just after Tsvetkova had another encounter with the Russian government for creating an anti-discrimination play that challanged traditional gender norms with a youth theater group.

While none of her actions seem like they should pose any problem, artists, especially those who speak up about LGBTQ+ and women’s issues, are becoming increasingly persecuted by the Russian government as of late. As stated by Amnesty International Russia’s director, Natalia Zviagina, “Yulia is the latest target of a long-running discriminatory and intensely homophobic campaign. She has suffered one blow after another, having been arbitrarily detained, interrogated and intimidated on multiple occasions.”

While the homophobic campaign to which Zviagina is referring is long-standing, many of the cases similar to Tsvetkova’s come after a federal law that was signed in 2013 by Prime Minister Valdimir Putin banning what the Russian government describes as “gay propaganda.”As Julie Trébault of the Artist's At Risk Connection (ARC) explained in PEN’s call for the immediate release of Tsvetkova, “The Russian authorities are making the stakes clear: if artists speak out in support of normalizing different body types or sexual orientations, their work will be quashed and their actions criminalized.”

Violence against members of LGBTQ+ community and their allies has also increased in the country in recent years. Just last year, an LGBTQ+ activist, Yelena Grigoryeva, was killed after her name was listed on a “gay-hunting” website. In 2018, the Human Rights Campaign also made headlines after reporting on unspeakable crimes being committed upon LGBTQ+ individuals in the neighboring Russian Republic of Chechnya.

The basic human rights of creatives, feminists and members of the LGBTQ+ in Russia are under attack. As Tsvetkova stated in an interview by Current Time posted on RadioFreeEurope, “This sets a serious precedent for everyone involved in LGBT activism in any way. Particularly if one is lucky enough, or unlucky enough, to have any connection with children.”

Tsvetkova is currently facing a series of trials. If convicted, she could be sentenced to the six year term in prison. However, thanks to organizations like Amnesty International, PEN and the ARC there are people fighting to help artists and activists like Tsvetkova, protecting the fundamental human right to exercise freedom of artistic expression.