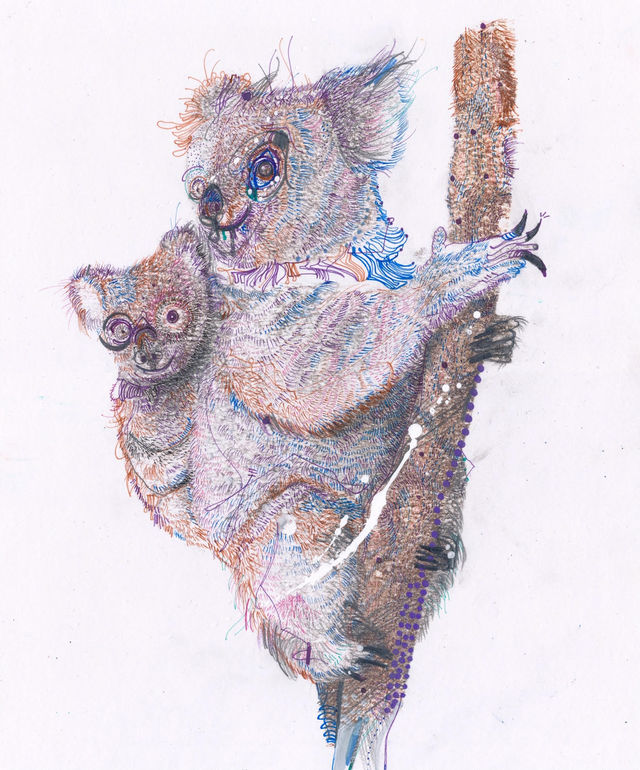 The New York City art scene has dramatically changed since the 1980s, and people are obsessed with that time period for a reason. Creativity existed for its own sake and was an integral part of artists' lifestyles. Artist dynamic duo Jadda Cat and Michael Alan of The Living Installation still live that kind of life. Their project maintains a raw punky format with similar energy to that of the downtown New York underground art scene.

Jadda Cat studied art in Savannah, Georgia before moving to New York to establish herself as an artist. Alan was born and raised in New York in the late '70s. He had a hand in the nightlife club scene in the early '90s and organized art shows, parties, punk and rap shows, and raves from a young age. Everything changed when he met Jadda Cat, and they fused to create the Living Installation, a wild, loose, all-encompassing piece of genre-defying, living art. Alan and Cat become living sculptures, constantly changing form, interacting inside an intricately and sometimes upside-down, inside-out, designed art installation. The installation is a three-dimensional collage, comprised of paintings, sculptures, projected imagery, theatrical lights, and materials. They are intricately woven into an eye-catching setting, which becomes animated by the duo.

I recently arrived at their cozy art studio in Bushwick to see their latest performance. I was greeted by Cat, fully engulfed as a work of art. She showed me into the space and hopped back into her stage. It was a two-person-operated circus of joyous clown smiles hidden under all the paint and dirt. I was amazed that they take no breaks — they don’t even go to the bathroom. The performance lasts up to eight hours, full of mesmerizing special effects made out of nothing, a visual feast for the eyes and senses. The combination of hypnotic visuals and rapid transformations makes each performance a spectacle not to be missed. I even rewatched the performance at home and was sucked into my TV. (And I hate TV.)

Cat is living art at its rawest form, girl power beyond, ruling the stage with rages of energy. She creates a dazzling array of characters, changing her body’s shape and size using a crazy amount of paint, prosthetics, tape, costume elements, toys, puppets, and assemblage materials to morph her appearance into creatures, ghosts and crazy critters, becoming in turn comic, beautiful, and even terrifying. She is questioning ideals placed on what a woman should behave and look like. Cat is a vibrant celebration of what it means to be a woman, a playful genius. She is cheerfully bizarre. She goes in and in and in, and makes me question what am I looking at. The Living Installation is something people need now: Jadda Cat shows us that we can be anything or everything. The ability to engage in these transformations with no script speaks to a natural talent that has no ulterior motivation other than engaging the world. 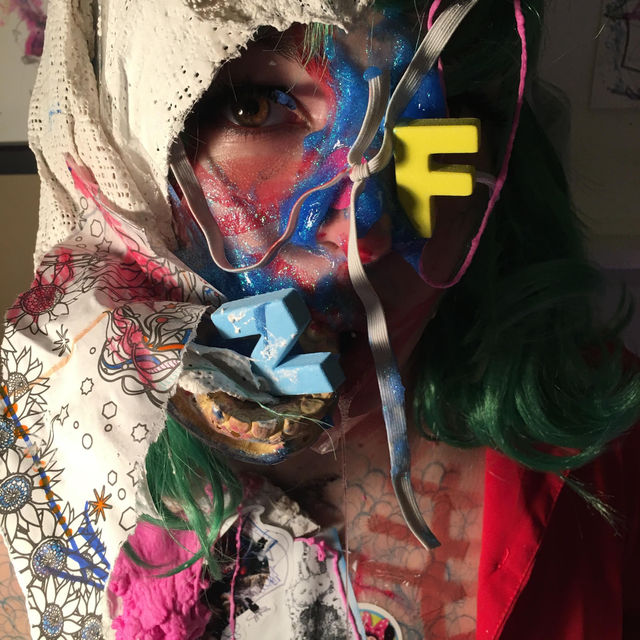 At the same time, Alan is changing his form into mutated insanity while they manage to photograph each other, buzz people up, create live music, and even run a live feed. They spend weeks designing the sets, backdrops, sculptures, costumes, ideas, and practices. It is apparent that the art duo pours their hearts into their work with out any hesitation, compulsively creating together for hours on end.

If that’s not enough and over the top they go out into the city splattered in paint and costume, showing up at random in museums, trains, and the streets with no purpose other than to strike a smile on the faces of the people around them. These kindred souls truly live the work, spending hours of time in preparation, creating art together in harmony. I have always believed that they must have played the same way as children, creating their own worlds and words and gibberish. Now they do the same thing as adults. The difference is that they are bringing the transformative power of pure play to their viewers, sharing their happiness and flow with a wider audience. The goal is to take people away from the stress of the day to day and immerse them in the world they have created for fun.

This unfunded, beyond vast, die-hard project has gained worldwide recognition and offers audiences an intense, long-lasting, surreal and serene experience that shouldn’t be missed. It’s different than anything I’ve seen going on now. I was truly excited to get a chance to find out more about the driving force behind their work, and what new creations they are brewing.

Jadda Cat, what goes through your mind while you perform? What is it that keeps you motivated to act for hours on stage?

Performing is a meditative experience where I get lost in the materials and colors and forget about daily life. I get to play!

Is this project what you do day in and day out?

Michael and I both work full time on our individual careers and work double time on the Living Installation. I am the manager and lead artist at a custom cake studio in Chelsea, where I design, sculpt and paint highly detailed cakes, and run the team. Michael creates his drawings and paintings at his Bushwick studio for at least twelve hours a day. He is constantly creating new work, which is shown in galleries and museums. He does custom portraits, donates work to various charities and helps his mom. Sometimes she joins us in the shows! We somehow always manage to find time to keep the Living Installation going. It is all consuming! We love to create smaller public art appearances in between the performances we plan out. 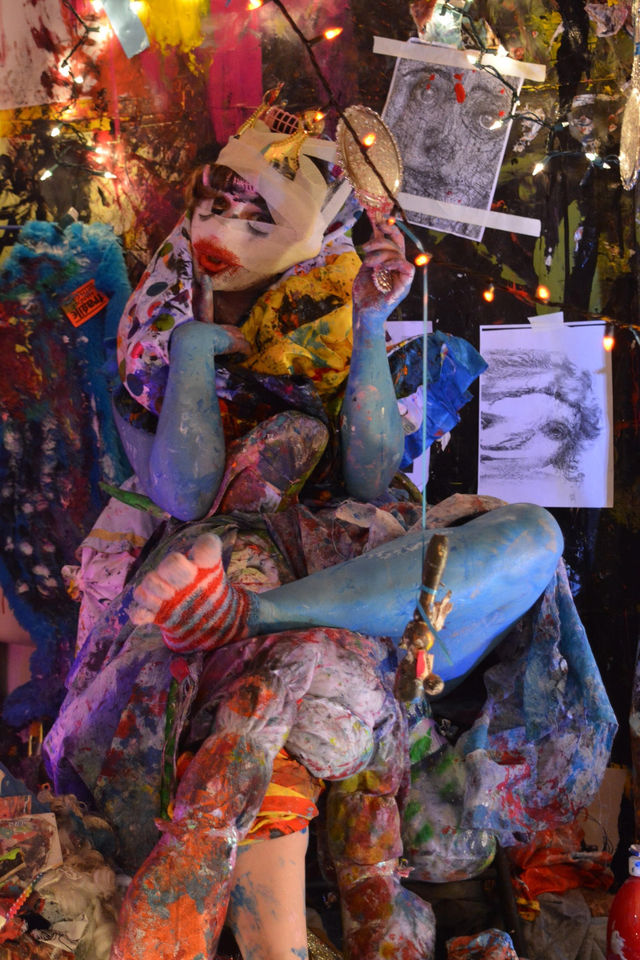 Do you have any performances coming up?

Our latest project is called “Messyme Street.” We’re taking inspiration from Sesame Street. It is somewhat of a parody but a highly artistic interpretation. We have made a whole new soundtrack, sampling the sounds from Sesame Street and messing with them until they are absurd and hilarious. This performance premieres this Saturday, January 18, to be viewed online. We’re also putting out an EP for everyone who signs up. I hope we can find some free time to go on the train and messyme around!

There is a musical element to your project. Can you tell me more?

Some is made live. Some is prerecorded. Some is made in collaboration with some legendary artists, including with the late Tommy Ramose, Meredith Monk, The Residents, Geneva Jacuzzi, Jeff and Jane Hudson, Adron, Jello Biafra, Aaron Dilloway, 3 Teens Kill 4, and even our cat Pirate.

Is it just performance the night of?

We also make photos from the shows which we plan on exhibiting.

There aren't many projects of this nature in NYC. I would say you are unique. Why do you do it?

I’d like to quote Mike on this. “What’s happened to New York City? Why so serious?”

This is a collaborative project between the two of you. What special strengths do you each bring to the project and to the performances?

I bring a strong female energy and lighthearted touch to the stage. Mike punks it out and breaks all our gear and falls all over. He’s a stage diver! Last week we were performing in a freight elevator and within the first minute he dropped his cane all the way to the basement — maintenance had to retrieve it. We compliment each other well.

What part does being in New York and from New York play in your creative flow?

We just don’t stop creating and we run on momentum.

What role does transformation play in your performances?

It opens us up to unlimited possibilities. It also is a risk. You never know what you’re going to get. You’re working blind. You’re possibly about to become electrocuted by Christmas lights and paint bad mix. You’re vulnerable, ongoing. Art with no risk is repetitive and you never grow or learn.

What changes would you like to see take place in the art world and the world in general?

You can view the next Living Installation online or live on January 18. Find more information here. 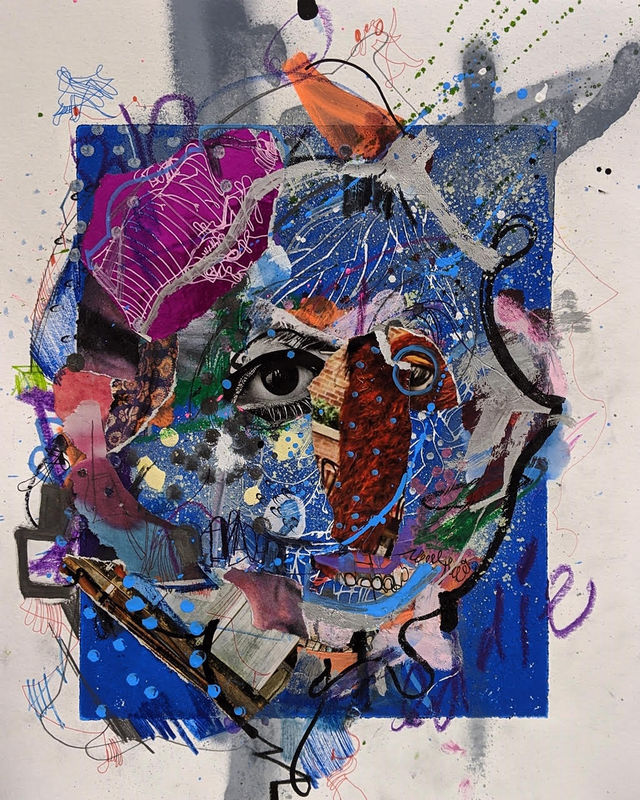