Director Lucie Tiberghien on Molière in the Park and Feminism: BUST Interview 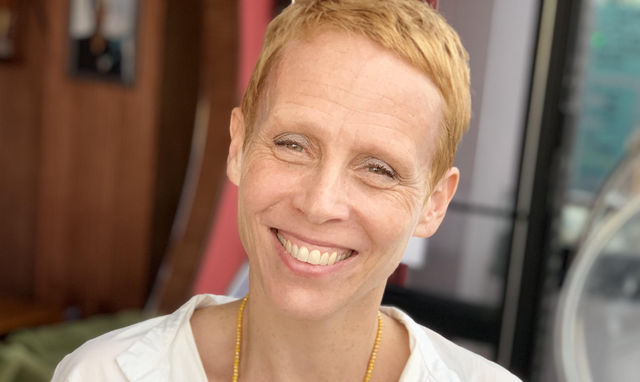 I attended a reading of The School for Wives at Molière in the Park (MIP) in Brooklyn's Prospect Park back in November. Molière in the Park aims to bring free, excellent, and inclusive theater to Brooklyn. At this particular performance, Handmaid's Tale (and former BUST cover girl) Samira Wiley shone alongside Dominic Fumusa, Christopher Henry Coffey, Carter Redwood, and Tamara Sevunts. I interviewed the program's founding artistic director, Lucie Tiberghien, about the series, the reading, and her craft. Tiberghien is a French-American Brooklynite who directs.

What is Molière in the Park? What prompted you to start/found the series?

Molière in the Park (MIP) was founded in the fall of 2018, and is the first non-profit in Brooklyn solely dedicated to bringing free, inclusive theater to Prospect Park, on a yearly basis. I believe that high caliber theater performed in public spaces and available to all is vital to the well-being of communities. I created MIP to fulfill that belief and give back to the borough I have called my home for over 15 years.

Every year we will produce a contemporary production of one of Molière’s masterpieces translated into English offering an opportunity to all of Brooklyn to experience subversive and timeless theater under the stars.

This was a reading for The School for Wives; do you think that this will go on to be a play in the spring of 2020 for Molière in the Park?

We are considering The School for Wives for our 2021 season. If we go ahead with a production, we will continue to look for ways to use the play as a way to further today’s conversations around gender and feminism by playing with non-traditional gender casting. For example, I would love to cast a woman in the lead male role.

Where would you say that there’s feminism to be found in The School for Wives?

The character of Agnes, who was held captive and stripped of her rights from a very young age and into adulthood, in the end is freed and able to choose a path for herself. That alone feels empowering, especially since the forces that allow her to regain her freedom seem to all be guided by chance alone, as if to say that the natural order of the world and nature tends towards women’s equality and the respect of women’s bodies.

As a director, what do you find in your line of work that’s inspiring?

Working on new plays with writers who are trying to raise awareness, and who believe, as I do, in the power of theater to impact the world we live in. And putting productions of classical plays like Molière’s into the world for free: inviting people to discover what theater can do on an individual, emotional, political, and communal level.

Are there plays by Molière, other than The School for Wives, that you might like to direct, particularly those with empowering themes?

The Misanthrope interests me from a feminist perspective as well. Celimene is a fiercely independent woman who choses against all odds, to remain single and free, rather than follow the man she loves and risk having to give up her freedom. I find it particularly interesting to also think about these issues through the lens of a French 17th century male playwright.

What would you say is the hardest part of directing?

Letting go of the work once the audience is allowed in. As directors, we shape, build and try to control as best we can, every aspect of the performance and the storytelling but in the end, once the show begins, the performers are in charge, and the show takes on a life of its own. I can hope that I created an ecosystem in which the show will grow and thrive but once the performances start, it’s out of my control. It’s like raising a child.

Finally, how do you find the act of sharing and supporting others along with being supported in regards to feminism?

It’s important to me to collaborate with women, listen to women’s stories, tell women’s stories, include a strong female perspective in everything I do. I often create all female design teams. I’ve worked with many women playwrights. The world is a better place when women are heard and given a platform.