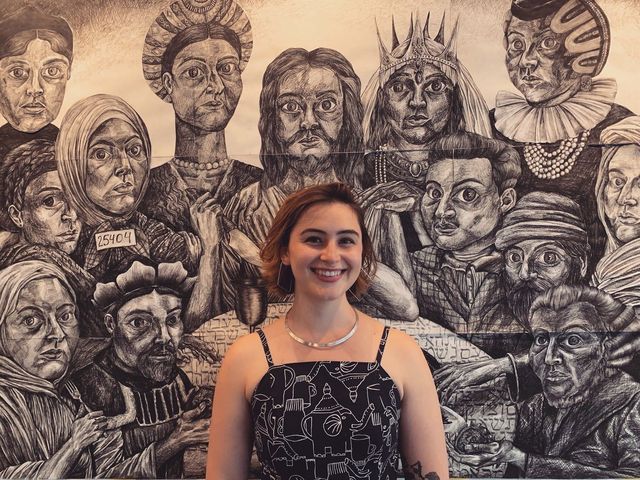 Drawing its title from the Yiddish saying “a Jew is 28 percent fear, 2 percent sugar, and 70 percent chutzpah,” Rosabel Rosalind Kurth-Sofer’s 70 Percent Chutzpah offers a guide on conversion to the curious would-be Jew. In the large-scale ink drawing installation, the section “Becoming a Jew: How to,” raises the specter of every Jewish stereotype in the book and shreds them in glorious, graphic fashion. For the discerning convert, it’s important to “carry Clorox with you at all times, so as not to contaminate public spaces. (Gentiles are sensitive to semitic bacteria),” and to remember that studying Torah “is critical to your identity as a Jew,” because “this is how you will win a Nobel Peace Prize and learn how to control the weather.” “Becoming a Jew: How to” aptly conveys the mingled fascination, envy, and revulsion anti-Semites seem to have for the people of the book.

Kurth-Sofer envisions two types of viewers as the ideal audience for these darkly humorous images. She sees “a Jew who gets it” — a fellow Yid who can appreciate her Jewish jokes, who understands the context and significance and playfulness of the experiences depicted in each meticulously-rendered panel. But she hopes her work also affects, as she puts it, a “non-Jew next to them” — a gentile who might be confused by the specificity of the content, who maybe doesn’t personally know many Jewish people, but who can still appreciate the aesthetics, the intricate detail of line and form Kurth-Sofer puts in every work. Either way, she says, “I want them to think it’s funny.”

Citing R. Crumb, Raymond Pettibon, and David Shrigley as artistic inspirations, Kurth-Sofer weaves text into her intricately-rendered, often monochromatic drawings. The body of work Not Kosher, created and exhibited during Kurth-Sofer’s sojourn to Vienna, Austria in 2018-2019, comprises grimly funny step-by-step illustrations detailing the process of cooking various Jewish dishes. Step one of “How to: Make Latkes:” “slice off foreskin of eight-day-old baby cousin;” meanwhile, baking Kurth-Sofer’s hamantaschen involves “milk and honey and secret ingredient (the tears of our ancestors)” and “(last but not least) sprinkle a little bit of Black Death on top.” 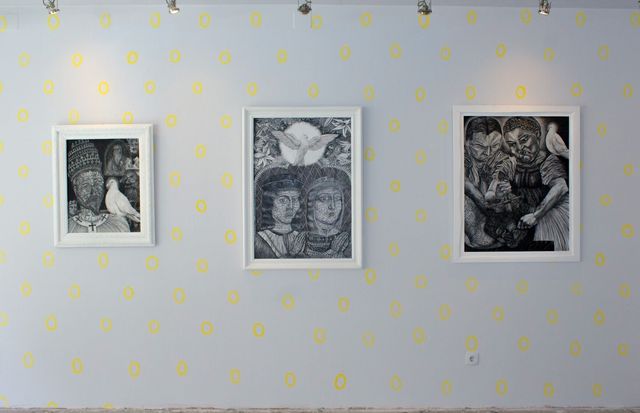 Recently, Kurth-Sofer expanded her work beyond the two-dimensional format and into something resembling social practice art. Following her undergraduate studies at the School of the Art Institute of Chicago, Kurth-Sofer received a Fulbright grant to study at Vienna’s Academy of Fine Arts, research anti-Semitic imagery at the Jewish Museum in preparation for what would become Not Kosher and 70 Percent Chutzpah, and teach English at two Viennese high schools. Growing up in a conservative Jewish community in Los Angeles with a non-Jewish father, Kurth-Sofer admits that she “felt like I was the least Jewish person in my school […] I just felt like I was too different to be Jewish.”

But in Vienna, Austria, outside of the second district, Jews are hard to find, and she discovered that she was, for many of her students, the first and only Jewish person they had ever met. “Some [students] would gasp,” Kurth-Sofer remarks, while “others would ask somewhat off-putting questions.” But she found that her work with Viennese students and at the Jewish Museum could connect in mutually beneficial ways: she taught the students about Jewish culture and ritual, shared her experiences as a Jewish person, and showed them some of the archival images she was studying. She “showed them pictures of the Jew as pigs, the Jew hoarding money,” and other anti-Semitic political caricatures, and would ask them, “can you see that this has been constructed by people who hate Jews?” 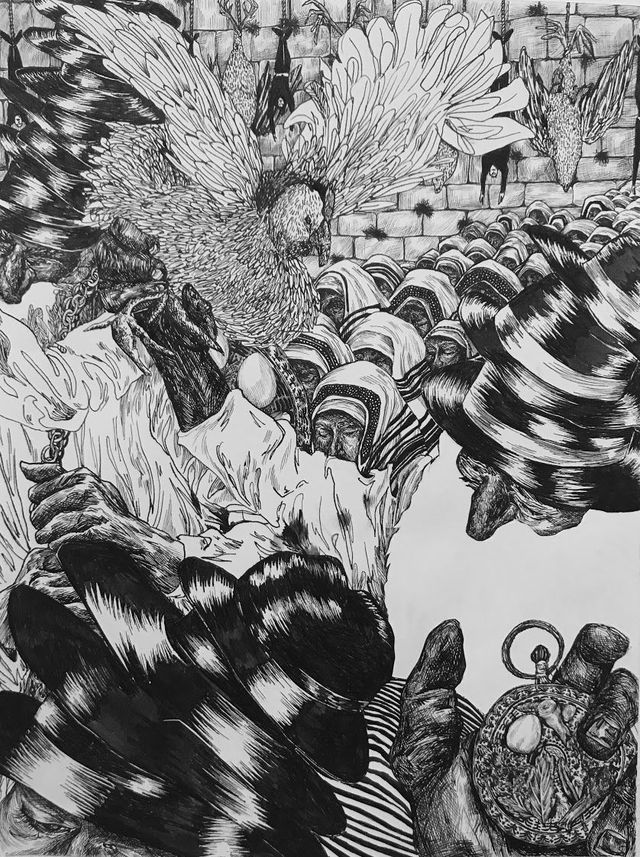 And when she began mounting her work in shows around the city, she went a step further, and invited her students, the teachers at her school, friends from her Viennese synagogue Or Chadash, and fellow artists from the Academy of Fine Arts—as well as anyone passing by outside—to join her in Havdalah ceremonies. Kurth-Sofer passed around booklets with translations and transliterations of the brachot, and encouraged them to participate however they felt appropriate. She admits, “it […] felt really uncomfortable for me having to lead and facilitate this thing that felt really out of my comfort zone, but ultimately it felt really great to share with the community, the secular community, that Jews are still here. Jewish traditions still exist, and [they’re] beautiful, too.” Kurth-Sofer plans to further incorporate Jewish ritual in future exhibitions, particularly if she continues to work with “concepts of Judaism or biblical tales or religious iconography.”

Living in Vienna, navigating that combination of hyper-visibility and invisibility, marked a sea change in Kurth-Sofer’s self-identification as a Jew, and for her artistic practice going forward. Her Fulbright proposal, titled “The Mythologized Jew,” was spurred by “an interest in rediscovering what it means to be a Jewish woman—a Jewish person—today.” At the Jewish Museum, she worked with the Schlaff Collection, a collection of some five thousand objects bearing anti-Semitic imagery or themes. Kurth-Sofer wanted to analyze these objects, which include figurines, postcards, and texts, for their myth-making, fictional qualities, and mine these popular, violent caricatures for use in an eventual body (or bodies) of work. She admits that it “took me a really long time to realize that they could be considered art at all,” but she found that this work helped her “celebrate my Jewish identity and learn more about what it means for me personally […] to be Jewish.” 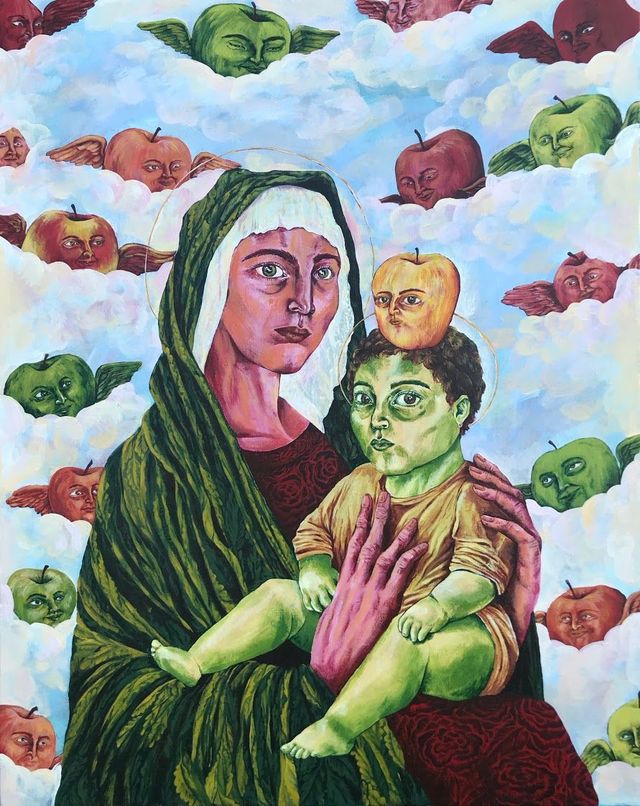 Now Kurth-Sofer is interested in Jewish mythology and folklore, and wants to highlight the stories of “Jewish women and femme figures.” She approaches each body of work with the focused rigor of a Talmud scholar. When I ask her about her current projects, she references not sheets upon sheets of doodles on drawing paper and dried-out ink pens, but a stack of texts she’s using for research. There’s Martin Buber’s Tales of the Hasidim, Howard Schwartz’s Lilith’s Cave: Jewish Tales of the Supernatural, and Robert Alter’s translation (with commentary) of the Bible. For individual drawings included in 70 Percent Chutzpah, Kurth-Sofer describes her love of the “curated compositions you find in Renaissance depictions of divine subjects.” Kurth-Sofer studied works at Vienna’s Kunsthistorisches Museum for inspiration, paying particular attention to “the fantastical, mystical nuances of scenes that have been depicted countless times throughout history.” In 70 Percent Chutzpah’s “Judith,” a tight composition stuffed with bulky, Sendak-esque figures features the dying Holofernes with the Mourner’s Kaddish patterned across his skin. A drawing depicting King Ferdinand and Queen Isabella of Spain, “God Full of Compassion,” sees Kurth-Sofer writing the Kel Maleh Rachamim prayer across the monarchs’ faces, in both cases indicating a degree of condemnation intermingled with sorrow. The stylized figures of Ferdinand and Isabella clasp their hands stiffly and look out at the viewer, a testament to Kurth-Sofer’s interest in the use of eye contact in Renaissance portraiture.

For the foreseeable future (with the exception of several upcoming shows in Austria), Kurth-Sofer’s practice is based in the United States, where, she observes, “people […] don’t really understand the urgency of my project.” Of her time and work in Vienna, she says, “now that I finished this project and I feel connected again to my Jewish identity, I’m finding that what’s prompting me to make my current body of work and future ideas.” Applications for MFA programs also take up much of her time and focus. But when she feels she’s satisfied her need for study, expect Kurth-Sofer to have her chosen subject and particular point of view ready to be deployed: “Once I start going, I work pretty fast.” 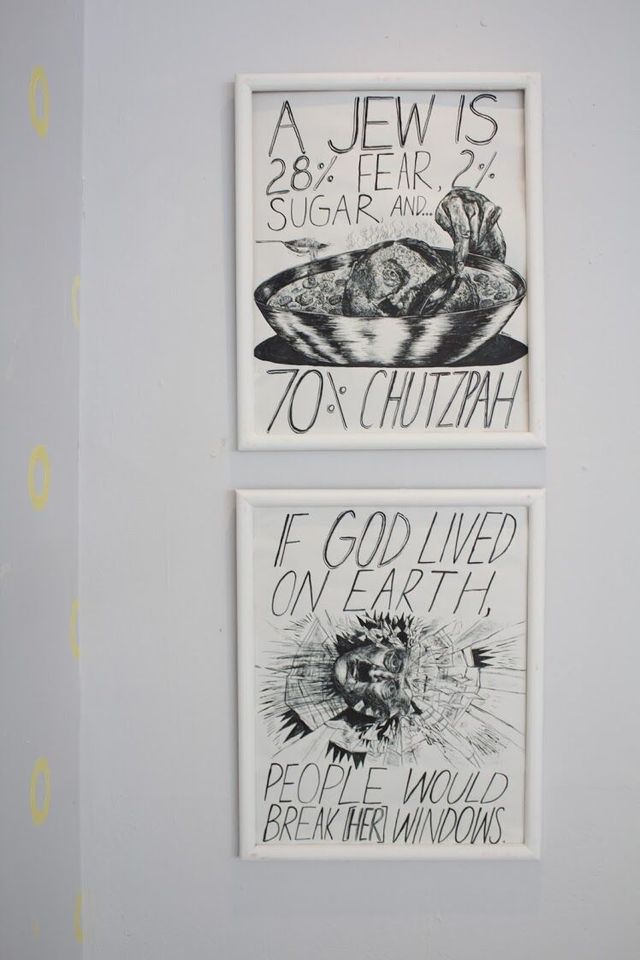 "The Plastic Age We're Living In": Artist Portia Munson On Her Environmentalist Art & The Power Of The Color Pink

Tags: Rosabel Rosalind Kurth-Sofer , art , visual art , Judaism , stereotypes , Austria
Support Feminist Media!
During these troubling political times, independent feminist media is more vital than ever. If our bold, uncensored reporting on women’s issues is important to you, please consider making a donation of $5, $25, $50, or whatever you can afford, to protect and sustain BUST.com.
Thanks so much—we can’t spell BUST without U.