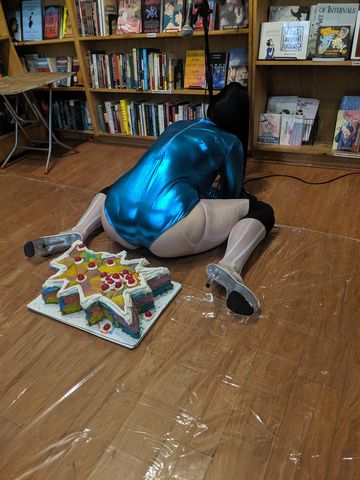 Lindsay Dye is a multimedia artist, performer, and cam girl who studied photography at the Pratt Institute. It was there, Dye says, that she first discovered a budding interest in camming and cam culture. Dye then began her career as a cam girl where she first learned of Wet and Messy Play (WAM) and Squashing (crushing) fetishes from viewers which ultimately lead her to what many know and love her for: cake sitting. Dye’s live cake sitting performances have garnered her critical acclaim and media interest as she’s been featured in the Huffington Post, Dazed, Office Magazine, and so many more. I had the pleasure of catching one of Dye’s performances on September 25 at Bluestockings Bookstore.

In a way, the effect and experience of watching cake-sitting begins in the anticipation, excitement, and confusion. Why did I express such titillation as a spectator of an act that is not sexually gratifying for me? The confusion does not dissipate when Dye begins performing. Even as she crouches down into a raised child’s pose, dressed in a metallic blue bodysuit, platform heels, and a long black ponytail, things are not all that they seem. Dye tops off her performances with live singing—most often sad love songs—while she crushes her handmade cakes styled in bright pink and blues. On one hand, watching a cake sitting performance is exactly what you’d think. However, what I did not anticipate was the nostalgia: the smell of sweet frosting brought me back to memories of childhood birthdays where my face was ultimately smashed into cake after blowing out my candles. Dye’s performances are not ones to miss, and I’d encourage anyone to satisfy their sweet tooth whenever she’s in town. After watching Dye’s performance, I was able to ask some questions that arose. Dye spoke on her performances as a cake sitter, her career as cam girl, and her experience in the current sex work climate. 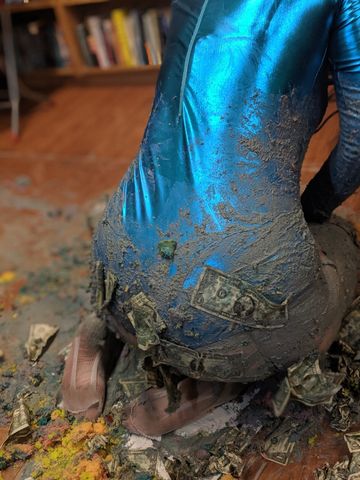 In your Dazed profile,you mentioned that you have always wanted to be a stripper. What was the stripping community like in Miami, where you grew up?

I describe Miami as a lawless swamp. You can get away with anything: you can change your name and start your life over on a beach. As a Florida woman, I began going to strip clubs as a pre-teen with a fake ID. I do not remember a time where I was not objectified. Ending up at Scarlett’s seemed natural; seeing naked women on a stage earn money from men made sense. It felt organic and circular. In high school, I advanced to clubs like Tootsie’s (the biggest stripclub in the world — I think I started the rumor that it’s in a defunct Costco). I admired the sport, the gymnastic qualities, that it took innate talent combined with body strength and learned skills. I wanted to be brave like strippers are, I wanted to be a performer like strippers are, I wanted to have the self-awareness strippers have. I needed to seduce people with my body as much as I needed to seduce people with my art, and I planned to make a living doing both. I knew I had to turn what made me feel weak into my power (and my profit).

In regards to your cake sitting performances, do you find that your performance art is valued similarly to traditional artwork?

I run my own business. I make my own schedule and book my own shows, I’m in documentaries and films, and my next exhibition is at a museum. I made this happen without the help of a manager or an agent, a gallery, or being considered a "traditional artist" — even though that’s what my formal education and training is in. In my experience, once you’ve claimed your identity as a sex worker, people, media, and society denounce that you have any credibility. Not just in relation to art, but any attachment to intellect.

I’ve learned that the "artist" label doesn’t really matter. I don’t measure my success if people refer to me as such or by how much money I make. I measure it by how much I produce and how active I am, my work ethic. I measure it by who I’m helping and the community I advocate for and uplift. I measure it by reminding myself that when I was 10 years old, I said to myself, “I’m going to move to New York City and be an artist.” I couldn’t have planned or imagined how it’d go down.

What has been your experience profiting from your performances?

I’ve never had the endgame of making art I’d profit from: that would mean I’d be pandering to an audience or corporate entity I don’t necessarily have a connection to or care about. I don’t necessarily profit from my performances. I can’t think of a fair price to charge someone [and they’d be willing to pay] for a 5-minute performance that has taken my lifetime up to this point to prepare for. My performances are always sliding scale dependent on the audience they’re for. My art and my life expenses are supplemented by something I can quantify, my services as a sex worker, merch I sell, stipends for panels, interviews and published articles.

What I’m "popular" for doesn’t necessarily correlate to how much money I make, although it is informed and influenced by how I make a living. I think it’s hard for people to grasp why I’d keep performing an act that isn’t economically viable — but this is exactly what art making isn’t about. If I was making a lot of money from my performances I’d become morally conflicted about why I do it. Its meaning would be compromised.

I understand that you’ve been camming since you were in college. I’m curious about how camming has changed for you in the wake of the internet’s changing climate and regulation of sex work?

I’ve been camming for seven years. The irony of camming during this length of time is that the interface hasn’t changed at all; in fact, it looks like AOL in the early 2000s. But the laws and regulations around online sex work have undergone extreme upheaval. With the implementation of SESTA/FOSTA, basic freedoms of the Internet have been dismantled by conflating consensual sex work with sex trafficking. Anyone who uses the internet has been affected, whether they realize it or not, though it’s the vulnerable laborers whose livelihoods are being threatened: women, people of color, migrants, and LGBTQ-GNC folk. The policing of sexual content ushers sex workers offline and onto the street.

The wildest part about the bills is that they hide what they are trying to find. Sex trafficking gets pushed further underground. It doesn’t erase it, it just makes it harder to find. These bills were meant to moralize, not protect.

Webcam performers can no longer offer date raffles and promote “in person” services. Skype has banned sexually explicit calls. Bots monitor the language and terminology in chatrooms that both performers and our clients use, prompting warnings of deletion if a term as simple as ‘meet-ups’ is typed in the chat — even in fantasy or jest. Craigslist and Backpage were seized by the government, along with a laundry list of other sites that allowed sex workers to protect themselves and properly screen clientele.

On the same note of sex workers operating online, have you ever had your social media taken down or been reported for your posts?

I recently posted a list of “HOT TIPS” meant to help the survival of sex workers’ Instagram accounts. I shared what I learned through trial and error use of my own Instagram account as I’ve been reported and deleted. I eventually got my account back and made some changes I suspected would keep me off IG’s radar. The tip that has helped the most and I’ve received the most feedback about: changing your gender to male on your profile. When I edited my gender, my shadowban was immediately lifted, I gained thousands of followers overnight, post engagement and impressions increased — revealing the very literal embedded sexism present on this app that is owned by Facebook.

Banks, payment processors, and crowdfunding sites have cut off business with anyone tied to the adult industry. Social media and online advertising tools have manipulated their TOS and implemented discriminatory coding to delete, shadowban, and censor sex workers, whether they’re posting sexually explicit content or not.

I’ve noticed many sex workers online advocating for the decriminalization of sex work rather than legalization. Do you have any thoughts on the matter?

This is a human rights issue. Legalization would mean regulation of where, when, and how sex work takes place — sex workers could still suffer criminal consequences and exploitation by police. It would disproportionately exclude marginalized people who may not have privileged access to the bureaucratic red tape: work permits, licenses, tolerance zones. Sex workers are already targeted and at risk; their human rights need to be protected. Decriminalization eliminates criminal penalities and prohibits law enforcement from intervening in any sex work activities, maximizing legal protection and their ability to access justice and healthcare. The goal is to make a safer environment for consensual sex workers where they are not penalized or regulated by unfair standards which would further the destigmatization of Sex Work.

Where to find Lindsay Dye next:

Dye has been working with The Museum of Sex to curate a camming exhibition. The show will be featuring some of Dye's artwork and will run December 19, 2019 – May 31, 2020. 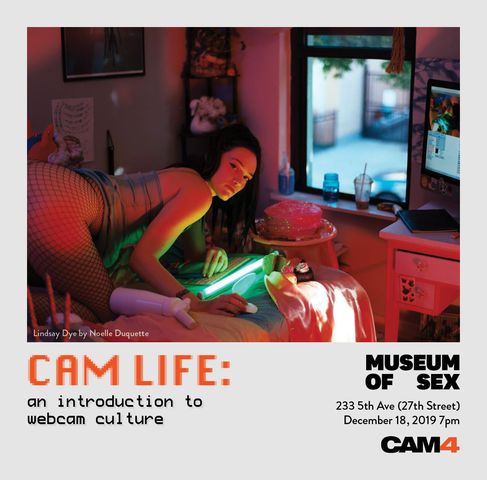