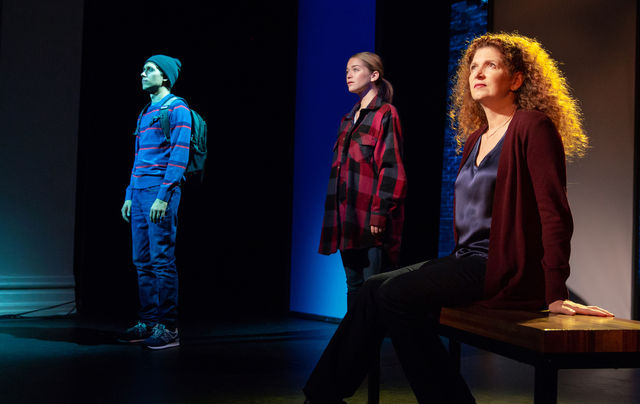 When It Happens To You is a new play that’s just come out this week and is out for only the next six weeks, now through November 10. It’s an off-Broadway play at The Sheen Center for Thought & Culture in New York.

Adapted from a memoir written by the New York Times best-selling author, Tawni O’Dell, and directed and co-conceived by Lynne Taylor-Corbett, this play is based on O’Dell’s true story of how she “struggled to help restore a sense of safety and wholeness to her family after her daughter was the victim of a brutal attack.” It encompasses a structure in which O’Dell brilliantly narrates multiple stories, telling the audience how she had to learn to survive while intertwining performances by actors.

O’Dell stars in the play as herself, and the show begins as she introduces the story and sets the stage for what’s to come. Throughout the play, she engages in breaking the fourth wall, and in more than one aside, O’Dell uses this time to talk about her thoughts and why she had to do what she did to bring peace to her family (portrayed by Kelly Swint and Connor Lawrence). With this cast, O'Dell turns the tragedy of recovering from the pain into a powerful performance.

In an interview with CBS New York, O'Dell says that she was inspired by the "ripple effect" that tragedy has on a family. Throughout the play, O'Dell talks about the statistics of rape and how the numbers shouldn’t be so high — that a victim could be anyone you know, and that’s scary. In her CBS interview, she says that her daughter sought justice by going to court and putting her rapist to jail, that her daughter still has terrible days, but O’Dell thought to herself that she at least might have prevented someone else from being attacked — and now, with the play, the two hope that they can help other victims.

When It Happens To You is a powerful performance about how the repercussions of violence outlive an incident. O’Dell makes clear in her asides that she’s looking to get to the heart of these repercussions, and how she, as a parent, deals with them. And how, even where there's tragedy, there is still space for love and humor.

Tags: When It Happens To You , Tawni O'Dell , Rape , Sexual Assault , Tragedy , Love , Humor , Play
Support Feminist Media!
During these troubling political times, independent feminist media is more vital than ever. If our bold, uncensored reporting on women’s issues is important to you, please consider making a donation of $5, $25, $50, or whatever you can afford, to protect and sustain BUST.com.
Thanks so much—we can’t spell BUST without U.