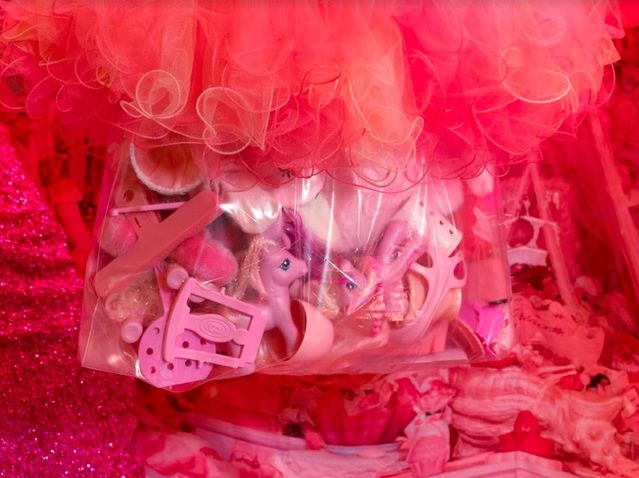 A bubblegum pink Barbie hairbrush. Gummy rubber bracelets inscribed with breast cancer ribbons and the word “hope.” A cake topper proclaiming, “It’s a Girl!” A bouquet of fake roses. These are just some of the objects that make up artist Portia Munson’s sculptures and installations, which amass thousands of found everyday plastic items, often arranged by color. Munson’s work draws attention to humanity’s insatiable hunger for more and more stuff, and the massive amounts of waste we continue to accrue because of it.

When I look at Munson’s beautiful, colorful works and the many objects used to create them, I’m instantly transported to my own girlhood—a time when pink toys, dolls, books and knick-knacks filled my bedroom and my life. Munson’s reframing of this everyday ephemera of girlhood and womanhood as art makes a powerful statement about the value of femininity and “girly”-ness, which are not often taken seriously in mainstream patriarchal culture. But beyond just giving artistic value to the objects that are marketed towards and associated with girls and women, Munson’s work also insists on these objects as waste, polluting our air, land, and water, and causing an environmental emergency. In this way, Munson forces us to look at our own complicity in our current climate crisis, dead-on.

Portia Munson is a visual artist working in photography, painting, sculpture and installation. Her work has been shown internationally in major public and private exhibitions since the early 1990s. Munson’s most recent solo exhibitions include The Garden, at PPOW Gallery in NYC, and Earth Rites, at NYU Langone Medical Center Art Gallery in NYC, both in 2017. Munson's Pink Project installation is currently on view through July 21st at New York’s Rockefeller Center, where she is a 2019 artist-in-residence. In Munson's words, this installation collects "the refuse of consumer culture that usually ends up in landfills, what you might call 'the backside of the mall.'"

In the press release for your 2017 show The Garden, you said that your work is interested in how the man-made invades nature. Can you say more about this idea? Do you see this as related to gender and/or feminism?

Nature is female: “mother nature,” and “mother earth.” There is almost no place on earth that humans cannot be seen or heard. Our presence is everywhere, from the sound of airplanes to plastic bottles. Feminism and environmentalism are interconnected ideas for me—feminism is a reaction against the exploitation of women, and environmentalism is a reaction to the exploitation of the environment. My collecting began with pink plastic objects [which I was thinking about] in relation to feminism, and over time my focus has shifted toward the overarching idea of environmentalism. The two are fundamentally linked. 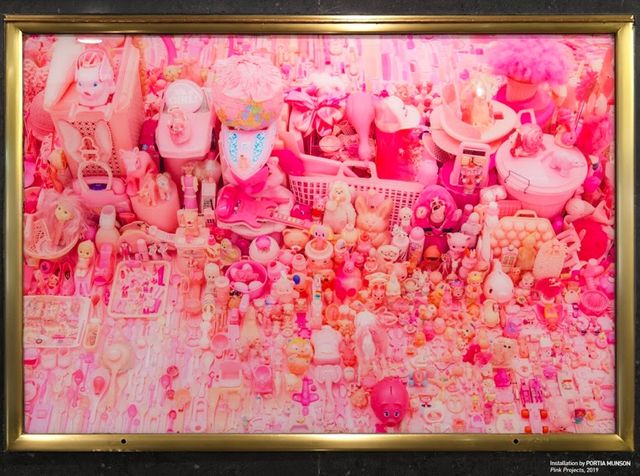 I was so struck by your piece “Her Coffin,” a large glass box filled with pink plastic items from hair brushes and My Little Ponies to breast cancer awareness wristbands. Can you share some of your thoughts on the color pink, and how it's operating within Pink Projects?

The idea for “Her Coffin” started as a response to all the pink breast cancer awareness products, most of which are plastic or packaged in plastic. Since plastic is carcinogenic and [often contains] endocrine disruptors, there seemed to be something very ironic going on.

“Her Coffin” is containing the pink plastic stuff of our time, the toxicity of the plastic, sealing it, encapsulating it in the form of a coffin. With this piece, I’m thinking about the dangerous impact plastic is having on our health and the health of our environment. Like all of my pink pieces, this one is commenting on the marketing of femininity with pink plastic objects.

Ever since I was a young girl, I was attracted to the color pink. As I got older, into my late teens and twenties, I began to question this connection, and I responded by collecting all the cast-off pink things I found. [I was] looking for the inherent meaning in the accumulation of pink objects.  I think that the color pink is cultural code for femininity, which in turn is shorthand for weakness or submissiveness. But when pink plastic objects are shown in mass, they have an empowering effect, and the collective color is much stronger. I layered the pink in Her Coffin like sediment, thinking about the many layers of meaning and wanting to get at how much pink plastic there is. I see it as a time capsule of the plastic age we’re living in. 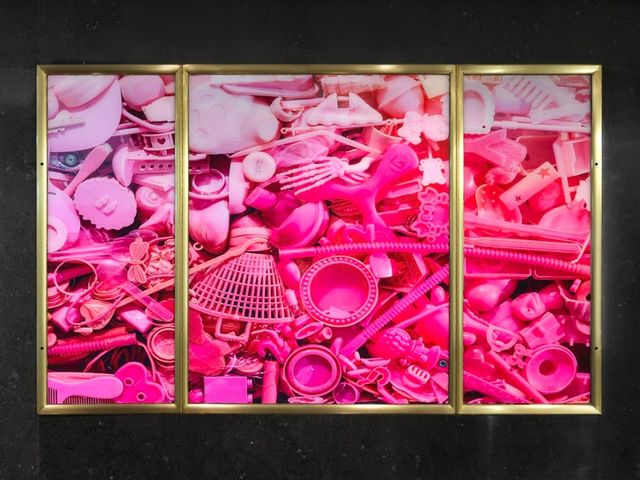 What's your process like? How do you gather the materials for your sculptures and installations, and how do they go from raw objects to the final works?

Almost all of my work is ongoing—one piece leads to the next. My work involves collecting and organizing stuff from the world around me. I organize and sort found plastic into categories commenting on and making sense of the world. I started as a painter, observing the world through still-life painting, collecting pink plastic objects as my painting subjects. In the early 1990s I spent a few summers living in a dune shack In Provincetown, Cape Cod. Walking the beach every day, I looked for and collected the plastic that was washed ashore, looking for pink plastic. I saw that the main color washing up was green, which was very striking to me, so I began the green project and started to think very clearly about the color and its relationship to the environment.

The image of green plastic washing ashore juxtaposed with the color green's environmental connotations is so powerful. Can you say more about your Green Project?

It just seemed very ironic and kind of sinister that so many environmentally toxic objects are mass-produced in the color green. Not only is the plastic bad for the environment, but the products themselves—herbicides and things like that—are actually destructive. The color green is also used to market stuff like lawn chairs. Another common use of green plastic is fake plants and trees. It's supposed to mean "environmentally friendly" and indicate that something deals with the natural world in some way, but it's made in this material that, when it eventually breaks down, is really toxic. Working with these ideas, I've made several green pieces. One was called "Lawn"—I loosely arranged the plastic detritus I'd collected in shades of green, mimicking an actual lawn. I was thinking about how a "lawn" is a modern invention, how so much care is given to lawns but they offer virtually no benefit, and the huge amount of chemicals introduced into our environment and water because of the maintenance of lawns. Then I made another green piece called "Sarcophagus," in which I also gathered lots of green plastic objects and encased them in a glass tomb. The container functions as a time capsule, and the objects within it are arranged from dark to light, as I was also thinking about the strata of the earth. I'm always trying to imagine the end of plastic; I'm very aware that this age we're living in is finite, so a sarcophagus seems appropriate. In terms of the earth's life cycle, we're living in the plastic layer.

I first learned about your work through No Wave Performance Task Force’s  2015 event, Period Piece, where Christen Clifford discussed your work as part of a lineage of menstrual blood art. Can you describe your menstrual prints project?

I started making menstrual prints when I was in my mid-20s. For quite a few years, when the blood was flowing, I would take sheets of paper and make prints off of my body, and I would do that through the course of each cycle. I would number the prints and hang them up, filling the wall to look like a calendar. When I first started making these prints, I didn't know about other contemporary artists using menstrual blood. Only later, when I was in an exhibition at Exit Art (titled “1920”) that included some menstrual work by Carolee Schneemann, did I realize that others were also working in that vein. I knew that, in some cultures, menstruating women would be separated from the rest of the group, that menstrual blood was considered powerful, and that there were power objects in various cultures that had menstrual blood on them. When I was making my menstrual prints, I felt I was connected to something ancient and powerful. It was empowering to use my menstrual blood to make images.

I’ve always made art that’s connected to what I'm observing in my immediate surroundings. When making work that involves collecting everyday plastic castoffs, I'm simply seeing what's around me and figuring out what I want to say about that. Menstrual blood was a substance that was right there; it was like an ink that had an amazing color, and as an artist who really responds to color, I was compelled to do something with this material. I was fascinated by the images that emerged, how they resembled Rorschach images, often looking like winged creatures—birds, bats, angels, or butterflies. The process of making images and displaying them was a rebellion against the idea of menstrual blood and menstruation as something that should be hidden. I like to make work that’s beautiful with materials or subjects that may have an unsettling aspect to them. 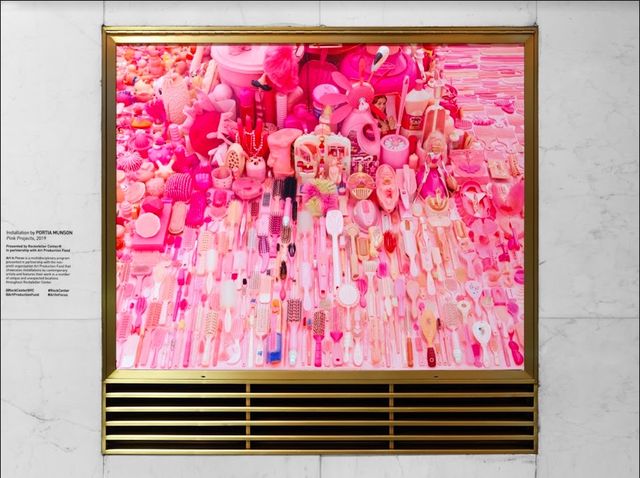 All photos by Dan Bradica, courtesy of Art Production Fund

Marisa Crawford is a New York-based writer, poet, and editor. She is the author of the poetry collections Reversible (2017) and The Haunted House (2010) from Switchback Books, and the chapbooks Big Brown Bag (Gazing Grain) and 8th Grade Hippie Chic (Immaculate Disciples). She's written about feminism, books, art, and pop culture for Hyperallergic, BUST, Bitch, Broadly, The Hairpin, and elsewhere. Marisa is the founder and editor-in-chief of Weird Sister, a website and organization that explores the intersections of feminism, literature, and pop culture. See more athttp://marisacrawford.net.