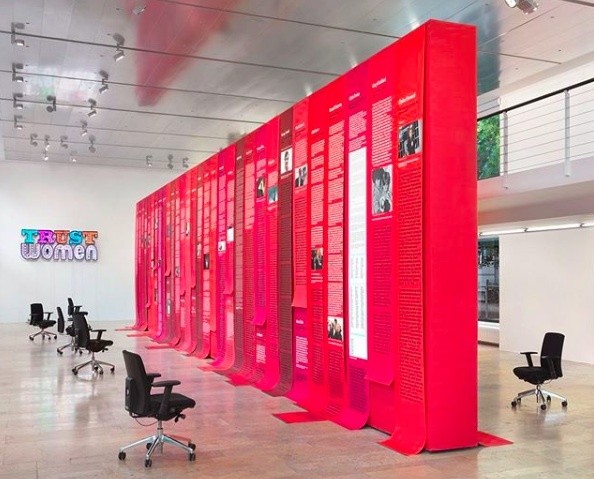 Andrea Bowers’ recent Art Basel exhibition, Open Secrets, is a massive installation designed in response to the #MeToo movement. In an Instagram statement, Andrew Kreps (the gallery who represents Bowers) provided this statement about the piece: “The work contains approximately 200 photographic prints, each of which lists the name and occupation of an accused person, as well as their response to the allegations, printed in the typeface in which they were originally published.” Open Secrets will be featured at Art Basel in Switzerland.

Ironically, though, Bowers did not obtain consent from the survivors to use the images in her piece. On Twitter, writer Helen Donahue expressed her disgust at her story being told and her likeness being shown without any prior approval on her behalf. According to The Cut, “Donahue had posted the images on her own Twitter in October of 2017, saying that she’d suffered the injuries at the hands of an unidentified man in media whom she and three women later identified to Jezebel as Michael Hafford, a former freelance columnist at Vice’s now-defunct Broadly vertical.”

cool that my fucking photos and trauma are heading art basel thx for exploiting us for “art” ANDREA BOWERS @unavailabl DO YOU KNOW HOW FUCKING INSANE IT IS TO FIND OUT MY BEAT UP FACE AND BODY ARE ON DISPLAY AS ART RN FOR RICH PPL TO GAWK AT THRU A STRANGER’S INSTAGRAM STORY pic.twitter.com/5X9vF5hZE5

Open Secrets is valued at $300,000. Bowers should not profit from people’s sexual trauma without obtaining their explicit consent to use their images in her art, especially when she included a tweet with the person’s Twitter handle included: she knew exactly where she could have reached out.

Bowers has apologized in a statement to The Cut, saying: “I should have asked for her consent…I have reached out privately and am very much looking forward to listening.”

Women's Careers Will Stall Because Men Are Afraid Of #MeToo

Tags: Andrea Bowers , Art Basel , Helen Donahue , art
Support Feminist Media!
During these troubling political times, independent feminist media is more vital than ever. If our bold, uncensored reporting on women’s issues is important to you, please consider making a donation of $5, $25, $50, or whatever you can afford, to protect and sustain BUST.com.
Thanks so much—we can’t spell BUST without U.