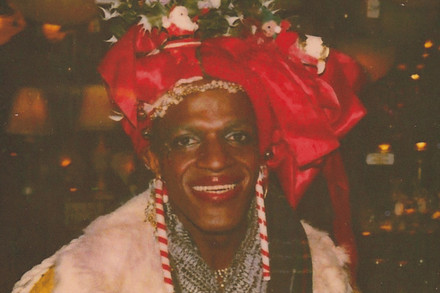 Marsha P. Johnson and Sylvia Rivera, two prominent LGBTQ activists, will be memorialized with a permanent monument in Greenwich Village near the Stonewall Inn. Both women were leaders in the Stonewall Riots of June 1969, along with Stormé DeLarvarie and others, an event many consider to be the spark that ignited the Gay Liberation Movement of the 1970s and '80s.

The monument will be the first in New York City to specifically commemorate members of the transgender community. (Christopher Park, across from the Stonewall Inn, already has two statues honoring queerness and gay rights, one of two men and one of two women close to one another). All figures are painted white and do not have distinct features. Critics, as the New York Times noted, have said that the current statues do not recognize the trans individuals and people of color so integral to the Gay Liberation Movement.

After Stonewall, Rivera and Johnson were the backbone of the LGBTQ rights movement in New York City, focusing much of their attention to homeless LGBTQ youth and transgender rights. Together, they founded the first transgender rights organization in the world, Street Transvestite Action Revolutionaries (STAR), in 1970. Both advocated for those afflicted by AIDS and continued with their activism until their last days, with Johnson being hailed as the “Rosa Parks” of the movement. Johnson died under suspicious circumstances at the age of 46 in 1992. Friends of Johnson and others believe she was murdered. Rivera died of liver cancer at the age of 50 in 2002.

The monument aims to bring recognition to these women’s accomplishments, which have largely gone overlooked in LGBTQ activism and history. New York City's first lady Chirlane McCray stated in an interview with the Timesthat it was important for a monument representing the accomplishments of the movement to have a “name and a face. […] The LGBTQ movement was portrayed very much as a white, gay male movement […] This monument counters that trend of whitewashing the history.”

City officials will begin their search for an artist shortly, hoping to have the monument (estimated to cost $750,000) completed by the end of 2021.

In an age where conservatism seems to be on the rise, this promised monument of two powerful, revolutionary trans women of color is a sign of hope. McCray went on to state that "the city Marsha and Sylvia called home will not erase them. […] Our new monument will proudly remind the world that hate has no place in New York City.” The monument will ensure that Johnson and Rivera will not be erased from LGBTQ history and cement their legacy of radical activism and hope.

Tags: Marsha P. Johnson , Sylvia Rivera , transgender , LGBTQ , activism , Stonewall , monument
Support Feminist Media!
During these troubling political times, independent feminist media is more vital than ever. If our bold, uncensored reporting on women’s issues is important to you, please consider making a donation of $5, $25, $50, or whatever you can afford, to protect and sustain BUST.com.
Thanks so much—we can’t spell BUST without U.