Put Your Money Where Your Art Is: Women and People of Color Take on Big Pharma and Racism 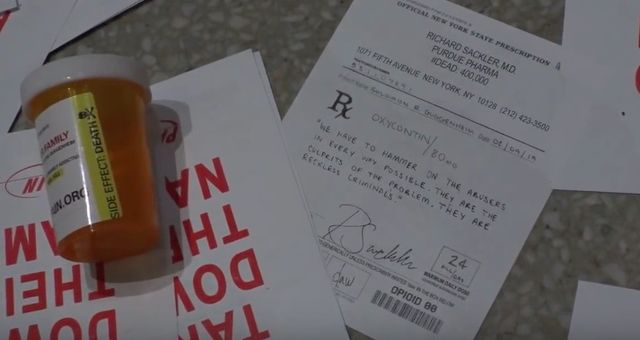 Art, politics, and activism are certainly no strangers to one another, but the past few months have been particularly active with protests in New York City.

This past February, artist Nan Goldin led a die-in at the Guggenheim Museum to protest the Sackler family's involvement with the museum. The Sackler family owns Purdue Pharma, the company that manufactures OxyContin, the controversial drug that has caused many fatal overdoses. Purdue Pharma has been accused of profiting from the opioid crisis by dishonestly marketing the drug and encouraging doctors to prescribe it with a heavy-hand. The Sacklers are globally some of the biggest donors to the art world, with Sackler wings of museums such as the Louvre and the Metropolitan Museum of Art. Their fortune is estimated to be $13 billion.

Masha Gessen of the New Yorker describes the protest: “[Goldin] stood in the middle of the lobby, visible from almost any point of the great round building. Then the noise level rose and did not subside. Small flyers started falling, as though from the glass dome, swirling like snow as they descended the six stories. Within minutes the floor was coated in white. The sheets of paper were prescriptions, made out by a “Robert Sackler, MD,” to a Solomon R. Guggenheim, for eighty-milligram pills of OxyContin, to be taken twenty-four times a day. Each script contained a quotation: 'If OxyContin is uncontrolled, it is highly likely that it will eventually be abused. . . . How substantially would it improve our sales?'” This quote was taken from a filing by the Massachusetts State Attorney General. Undoubtedly, the protests have worked. The Guggenheim, the Met, and the Tate Museum in London have said they will no longer accept donations from the family.

As prominent as the Sackler family is in the art world, they aren’t the only patrons who have earned their wealth through corrupt business practices. This May, the Whitney Biennial will take place. The Biennial is an important showcase of contemporary art. This year, 75 artists will be featured, and the lineup is the most diverse ever: according to The New York Times, “people of color are a majority, and it’s one of the youngest groups in the biennial’s history, with three-quarters of the participants under the age of 40.” However, it is not without some controversy. One of the participants, Michael Rakowitz, withdrew from the event due to the fact that Warren B. Kanders is the museum's vice chairman. Kanders is the chief executive of Safariland, a company that manufactures tear-gas that has been used on migrants crossing the U.S-Mexico border.

The efforts of a group called Decolonize This Place have been crucial in drumming up public awareness and support of the legacies of these well-known institutes. The group describes themselves as “an action-oriented movement centering around Indigenous struggle, Black liberation, free Palestine, global wage workers and de-gentrification.” The group protested the Whitney last December due to Kanders involvement, and in solidarity with a letter calling for Kanders’ resignation, signed by more than 100 of the Whitney’s staff. It is likely that they have plans for the upcoming Whitney Biennial.

In a Vice interview with members of the Guerrilla Girls, the anonymous feminist art collective who have been highlighting gender inequalities in the art world since the 1980s, they discuss how little the art world has changed since they first started protesting. “The [wealthy] art world pretends that it's liberal and progressive. They're kind of hypocritical when they complain about Donald Trump the politician and don't look at the system that they participate in,” one Guerrilla Girl said. According to the interview, “a recent study published on February 11 by the Public Library of Science (PLOS) revealed that the artists whose work is selected to be part of major U.S. museums’ permanent collections are still overwhelmingly white (87%) and male (85%).”

There’s nothing wrong with enjoying the art that these museums provide. However, we must go beyond our uncritical acceptance of any billionaire who just so happens to have their name on a building — not just for the art world, but for the whole notion of capitalist philanthropy in general. Art should be exciting, thought-provoking and reflect a diverse society. We should demand the same of the institutions that propagate it.

Tags: art , the Met , Guggenheim , Whitney , Nan Goldin , protests , Sackler family , opioid crisis
Support Feminist Media!
During these troubling political times, independent feminist media is more vital than ever. If our bold, uncensored reporting on women’s issues is important to you, please consider making a donation of $5, $25, $50, or whatever you can afford, to protect and sustain BUST.com.
Thanks so much—we can’t spell BUST without U.