Ever Seen A Painting Of An Animal From The 19th Century? Odds Are This Artist Is Responsible 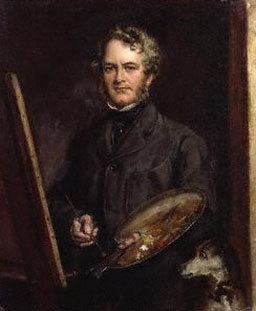 Many of us know Sir Edwin Henry Landseer (7 March 1802 – 1 October 1873) as the sculptor of the four magnificent bronze lions that guard Nelson’s column in Trafalgar Square. During the mid-19th century, however, Landseer’s fame derived from his unrivalled talent as an animal painter. 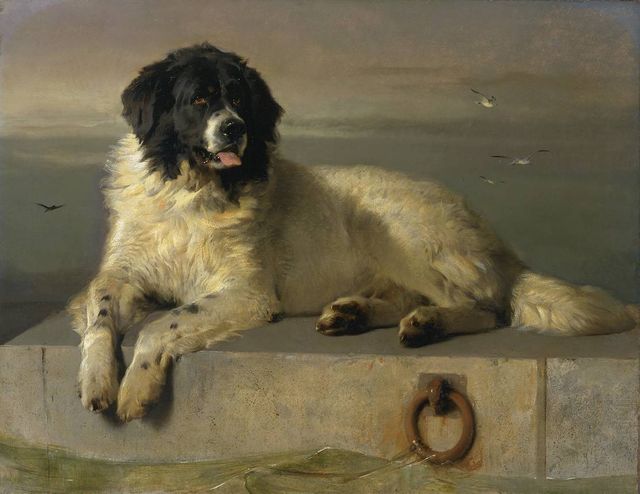 From the upper echelons of Victorian society to the working middle-class, there were few who were not familiar with Landseer’s work. He owed much of his success with the general public to the efforts of his two brothers. Talented draughtsman in their own right, they made engravings and etchings of Landseer’s paintings which sold at a fraction of the cost of the originals. As a result, it was not uncommon to find a reproduction of one of Landseer’s paintings gracing the walls of a modest family dwelling in much the same way an original might be displayed in an upper-class drawing room. 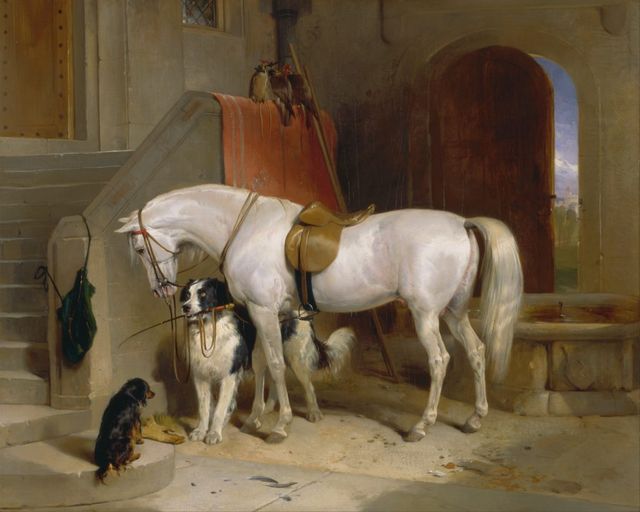 For the majority of his career, Landseer had royal patronage. He painted many portraits of Queen Victoria’s pets over the years and, upon her marriage to Prince Albert, Landseer painted a picture of the queen herself. He would go on to paint the royal children, often depicting them with the royal pets. 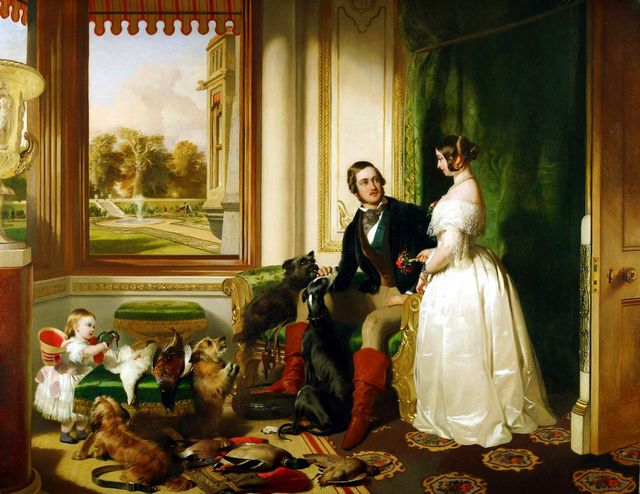 The critics of Landseer’s day accused him of cheap sentimentality and of “pandering to vulgar tastes.” Even today, a current entry at Britannica.com states, rather severely, that Landseer’s “later works were marred…by anthropomorphism that lapsed into sentimentality.” The chief criticism seems to be that Landseer has given the animals in his paintings human traits such as courage, loyalty, devotion, sorrow, and grief. 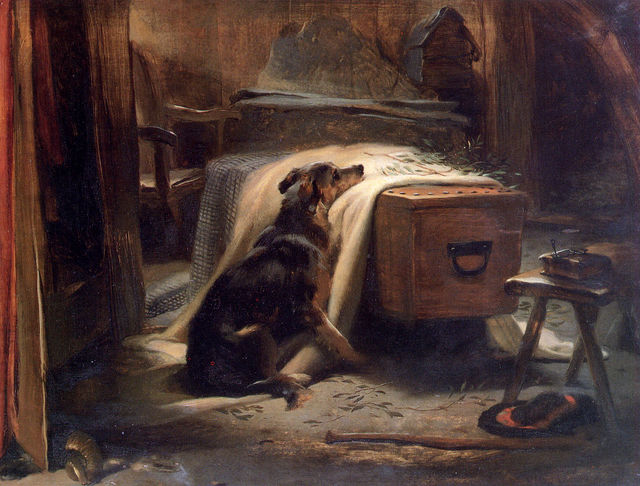 These criticisms did nothing to diminish Landseer’s popularity. When he died on October 1, 1873, all of London marked his death. Flags flew at half mast, people lined the streets, and the lions in Trafalgar square were hung with wreathes. Landseer was buried at St. Paul’s Cathedral. Punch eulogized him with a poem that read, in part:

His art has been sound teacher to his age; Whether of sympathy ‘twixt man and brute,Or lessons drawn from Nature’s wholesome page,And pleasure that in truth has deepest root.

Today Landseer’s paintings hang in some of the finest museums in the world. I present to you below a collection of some of his most famous and controversial work. 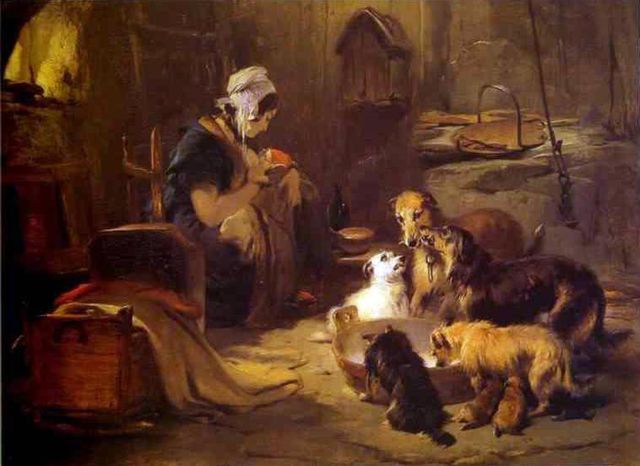 This painting is an example of one of Landseer’s very popular storytelling pictures. The setting is a Highland shepherd’s hut. A group of dogs are gathered round their breakfast – a tub of hot milk. It appears that the three dogs behind are bickering over who gets to eat first. While they argue, the two smaller dogs in front (one of whom is a nursing mother with a few pups) are drinking their fill. Completely oblivious to any canine turmoil, the shepherd’s wife sits nearby, nursing her baby. 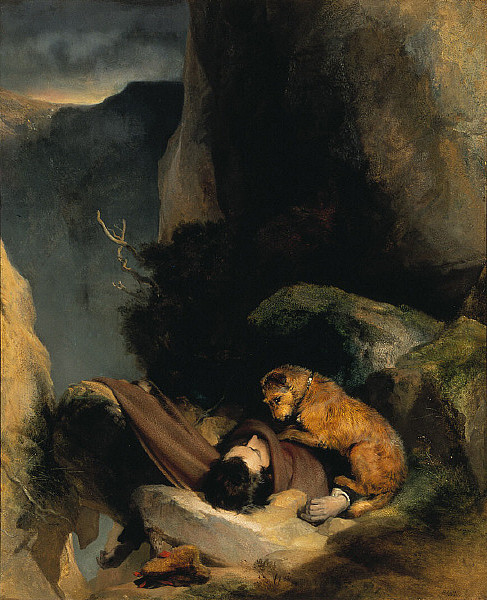 According to the Saint Louis Art Museum, this picture is based on the true story of an 1805 mountain climber who fell to his death while hiking in England’s Lake district. “His body was not discovered for three months and all that time, his faithful terrier stayed by his side.” 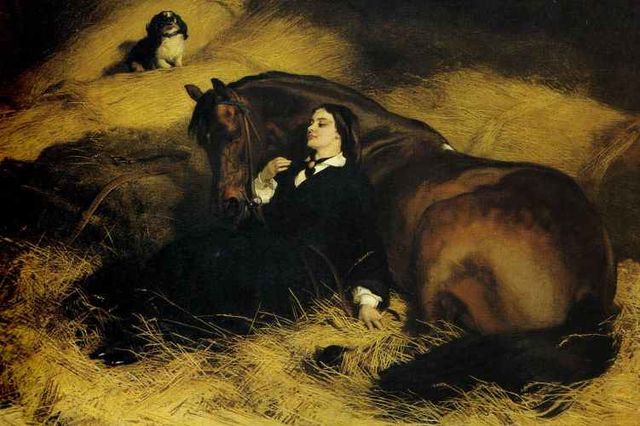 Exhibited at the Royal Academy in 1861, the catalogue described this painting as a portrait of noted equestrienne Ann Gilbert demonstrating the taming techniques of the famous American horse whisperer John Solomon Rarey. The critics were not convinced. The Times wrote: “The lady reclines against his glossy side, smiling in the consciousness of female supremacy, and playfully patting the jaw that could tear her into tatters, with the back of her small hand. For horses read husbands, and the picture is a provocation to rebellion addressed to the whole sex…”

Even more controversial, there were those who believed that Landseer was paying homage to the famous courtesan Catherine Walters. She was known as a “pretty horse-breaker” and when she went riding in Rotten Row, crowds gathered to watch her. In their review of “The Shrew Tamed,” Blackwood’s Edinburgh Magazine wrote: “We hope it will now be felt by Sir Edwin Landseer and his friends that the intrusion of ‘pretty-horse-breakers’ on the walls of the Academy is not less to be regretted than their presence in Rotten Row.” 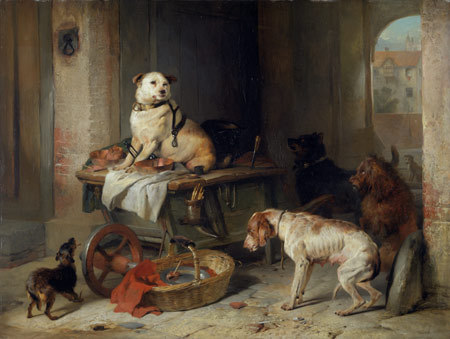 A Jack in Office, 1830. by Edwin Henry Landseer Victoria and (Albert Museum, London)

This is one of Landseer’s best-known works and the first of what the Masters of Art series calls his “canine burlesques of human life.” A dealer in horse meat has left his wheelbarrow in an alley under the guardianship of an overweight cur – the titular ‘Jack in Office” (slang for a self-important, minor official). The thin, clearly starving, neighborhood dogs are drawn by the tempting smell and cautiously approach, but none dare to touch the meat that Jack is watching over. 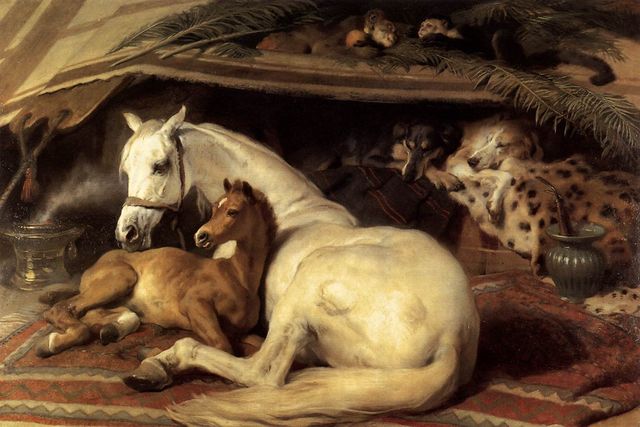 According to The Wallace Collection, this painting is Landseer’s response to “fashionable Orientalist themes.” It depicts an Arabian mare and foal, two greyhounds, and two monkeys, all snuggly settled in and around an Arab tent. The Wallace Collection points out that the “higher up the picture, the more intelligent the animals depicted become.” 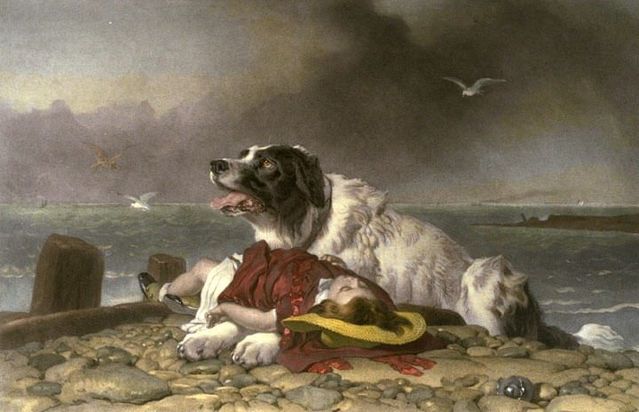 In this painting, Landseer depicts a famous Newfoundland-St. Bernard named Milo who lived with the keeper of the Egg Rock Lighthouse in Maine. Milo was credited with rescuing several children from drowning. Newfoundland’s were featured in many of Landseer’s paintings and he popularized the black and white variety of the breed – a variety which now bears his name.