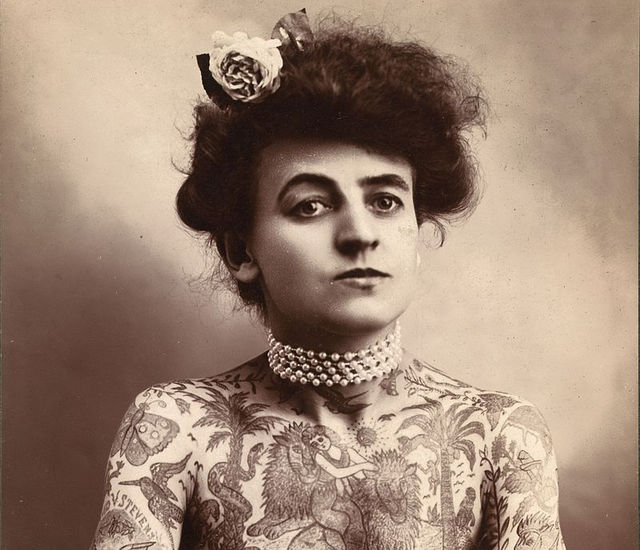 The tradition of tattooing dates back thousands of years all across the globe, from Ötzi the 12,000 year old ice mummy found in the Alps whose skin shows the oldest tattoos on a specimen, to Ancient Egyptians using tattooing to heal various ailments. Tattooing is steeped in tradition and has an incredibly rich and diverse history. And there is just way too much of it to fit into one article, so today we’re going to focus on the women who transformed the art form at the start of the 20th century.

Maud was born on February 12, 1877, in Lyon County, Kansas. From a dirt poor family, there were little opportunities for her future. So when Maud was a teen, she ran away to join the circus. 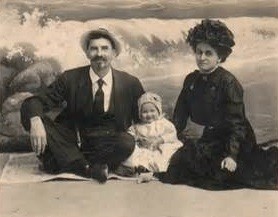 Gus, Maud and their baby, Lovetta.

By the time Maud met her future husband, Gus Wagner, in 1904, she was a famed contortionist and aerialist. He was a sailor who was covered in tattoos he’d picked up during his travels, and Maud was utterly entranced by his artwork. Gus also had a reputation as quite the tattoo artist.

Smitten, Gus asked Maud out and of course, she said yes… on the condition he teach her how to tattoo!

Instead of dates, they had lessons. Maud learned a traditional hand poked tattoo method. This is where a single needle is dipped in ink then pushed under the skin by hand over and over to create a pattern. It quickly became her preferred method (in fact, Maud would never use a tattoo machine!).

Maud quickly grew one of hell of a collection of tattoos on herself, thanks to Gus and his lessons, so she became a tattooed lady attraction.

But after Maud and Gus tied the knot, they left the circus to tattoo full time, travelling around around with Vaudeville shows, county fairs, circuses and curiosity exhibits.

Not long after they were married, Maud and Gus had a daughter, Sarah, born in 1908. Sadly, just one month after her birth, Sarah died. It crushed Maud, so understandably when the couple had another daughter, Lovetta (born two years later in 1910),Maud was a very overprotective mum.

Maud actually banned Gus from ever tattooing their daughter. And though Lovetta grew up to become a tattoo artist just like her parents, she never had any tattoos. When Gus passed away in 1941 Lovetta said she’d never get tattooed, because if it wasn’t her Dad’s, then what was the point? (And also, because there was still no way in hell that her mum, Maud, would tattoo her baby girl!) 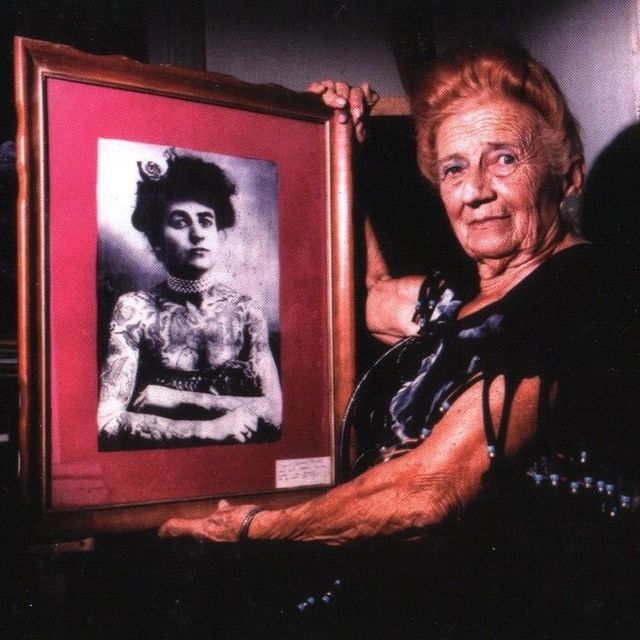 Lovetta holding a famous pic of her Mum, Maud

As time went on, Maud found fame as America’s first known female tattoo artist. This kept her in demand all over the country, and she worked right up until her death in 1983.

Her last tattoo was a traditional rose she tattooed on fellow artist Don Ed Hardy.

The Wagner family helped bring tattooing inland, popularizing it not just in the coastal and Naval towns in America.

Maud is still celebrated as the first known female tattooist in the USA and she influenced so many other artists who came after her. Including…

Mildred Hull, known to her friends as Millie, was a marvel of the tattoo world. In the 1930s, she was the only woman tattooing as part of the legendary Bowery tattoo group, which would become known as the originators of modern tattooing.

Born in 1947, she lived in the rougher (putting it mildly) areas of New York City. A school dropout aged 13, Millie soon joined the circus (you can see a pattern emerging here) and started working as an exotic dancer. 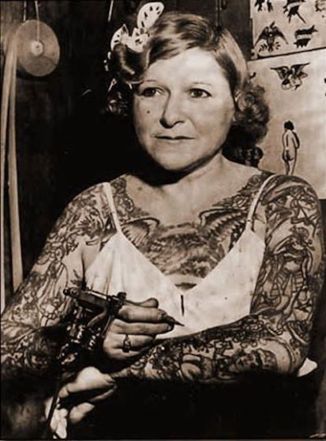 Millie with her tattoo gun

A sideshow spotter told Millie she’d make way more money as a tattooed lady, earning up to $80 a week.

So she met with famed tattooist Charles Wagner and began the very painful process of covering her body in tattoos in just a matter of WEEKS! (If you’ve ever had a sleeve done, then you can imagine the pain of covering your whole body in a few weeks!)

Millie talked through the process in an interview in the late ’30s, and she clearly comments on how she felt forced into getting tattooed so she could make more money, but she also had a wicked sense of humour about it: “I had a few weak spells as a result of the tattooing, but mainly I suffered anemia of the bankroll.”

So, Millie ditched the sideshow, learned the tattoo trade and opened her own tattoo parlor, The Tattoo Emporium, in Bowery at the back of a barber shop. (Most of the tattoo shops down Bowery were in tiny spaces at the back of other businesses.) 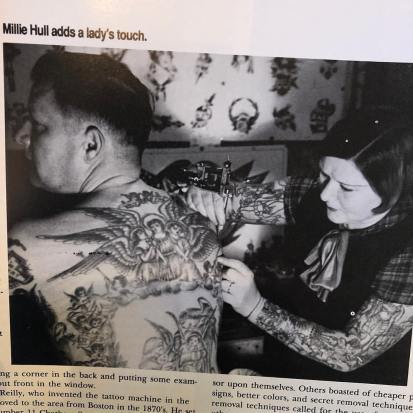 Millie tattooing a customer at her Bowery shop

The fact that Millie had her own business was an unbelievable achievement. At the time, tattooing was totally dominated by men. And with Bowery being a really rough area to live and work in – EVERYTHING was against her. But Millie didn’t care. She held her own and grew The Tattoo Emporium into a successful business.

She sat at the heart of an ongoing tattoo revolution, creating the traditional bright and bold styles that are still used today. More than this, Millie gained a kind of mainstream fame. Just to give you a flavour of her success, in 1936, Millie appeared on the cover of Family Circle, a famed women’s home and life magazine that gave tips on interior design and the best recipes for meatloaf. Stars on the cover tended to be wholesome Hollywood stars, and there was Millie front and center – tattoos on show!

Sadly, Millie had a tragic ending. She suffered with depression throughout her life and in 1947, she committed suicide, consuming poison while sitting in a restaurant in Bowery. She left behind a huge legacy, firmly cemented as the founding mother of modern tattooing.

Jessie is a slightly more well-documented figure in tattooing. She was famed for being the first documented British female tattoo artist! Born in 1904 in Croydon, London, Jessie was part of a large family, with seven other siblings. Her dad was a Captain in the Navy, a tattoo artist and sharpshooter, while her mum was a poet and Illustrator. 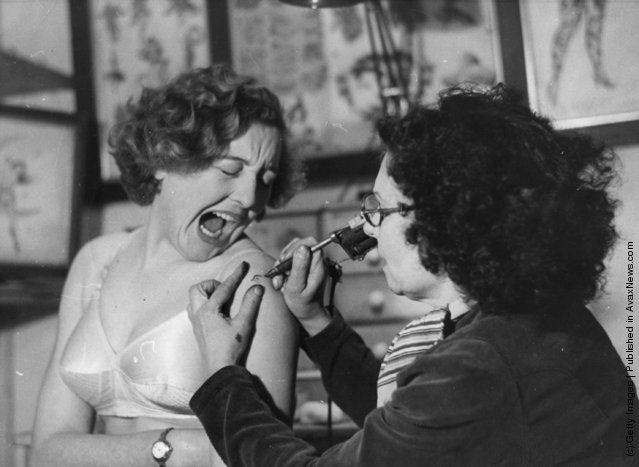 Jessie tattooing a servicewoman in 1952

Jessie was another circus gal! Her whole family was in the game. She worked as a human target and a sharp shooter. In 1933, she appeared on the BBC with her sister and brother in a knife throwing act, one of the first circus acts ever televised! Her career in the big striped tents came to a premature end, though, when she was shot in the shoulder during a terrible accident.

She then decided to follow in her tattooist father’s footsteps and took up a tattoo gun of her own, swapping it out for her rifle. She started tattooing with her dad in 1921 in Barry, South Wales. By the time Jessie was 18, she already had quite a large client base at her Dad’s tattoo shop, and was well-liked in her local community in Wales.

Jessie’s style of tattooing was bold and colorful. She worked freehand, meaning she drew her designs straight onto her client’s skin, and she didn’t use stencils (a method of pre-drawing and outlining a tattoo design). This made her even more of a novelty in the tattoo world.

Her tattoos were getting a stellar reputation, and in 1955, Jessie won second place in the Champion Tattoo Artist of All England for her tattoo of a highland fling. This was a monumental achievement for Jessie. Female tattoo artists were totally unheard of, so this award generated huge buzz around Jessie’s work. 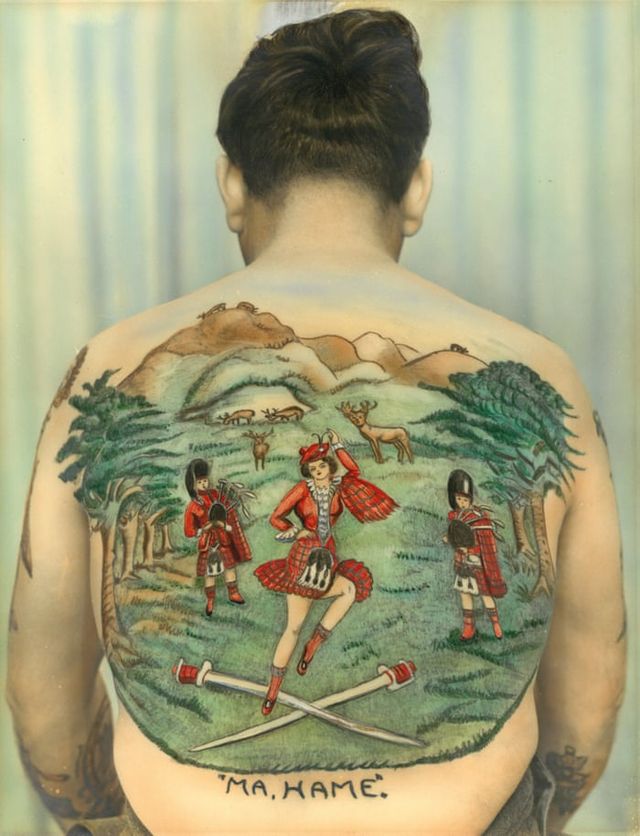 After this success, Jessie went on to open her own tattoo shops, first in harbor town Portsmouth and then later one in Aldershot. Again, her achievements with this are utterly incredible: she had the means and the popularity to own her own business and tattoo her way. Tattooing still wasn’t in the mainstream, so not many artists could do this.

It wasn’t easy, though. Other tattoo artists would spread rumours about her being unsanitary, called her a whore, and vandalized her shops. She was robbed and had her designs stolen, so much so that at one point she had a bodyguard help her take her shop money to the bank to deposit it.

In another dark chapter, Jessie was married when she turned 27, but her husband was an abusive nightmare. After 8 years things came to a head and Jessie shot and injured her husband with a gun she’d exchanged with a client for one of her tattoos. Her husband had kicked her dog down the stairs… I would have shot him, too.

This didn’t stop Jessie, though. She loved tattooing and in 1968 Jessie moved back to her beloved Barry, Wales (Apparently with her 300-something year old lover!) and though she’d officially retired from tattooing in 1963, she kept on doing what she loved. Most of her clients were now women! Attitudes were changing and shifting. Jessie was at the forefront of that and is remembered fondly by everyone who knew her.