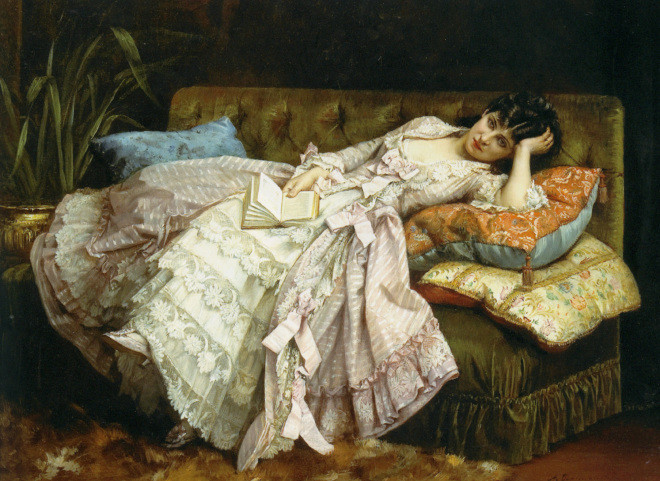 Fashionable 19th century Parisian painter Auguste Toulmouche is best known for his depictions of richly clad women set against the backdrop of luxurious interiors. His paintings have been called “elegant trifles” and the ladies who feature in them have been referred to as “Toulmouche’s delicious dolls.” One critic even compared the interiors of a Toulmouche painting to daintily decorated jewel boxes. Unsurprisingly, the 19th century public had a great appetite for these visual treats. Toulmouche’s paintings were popular, both with the upper and middle classes, and even with post-Civil War Americans. 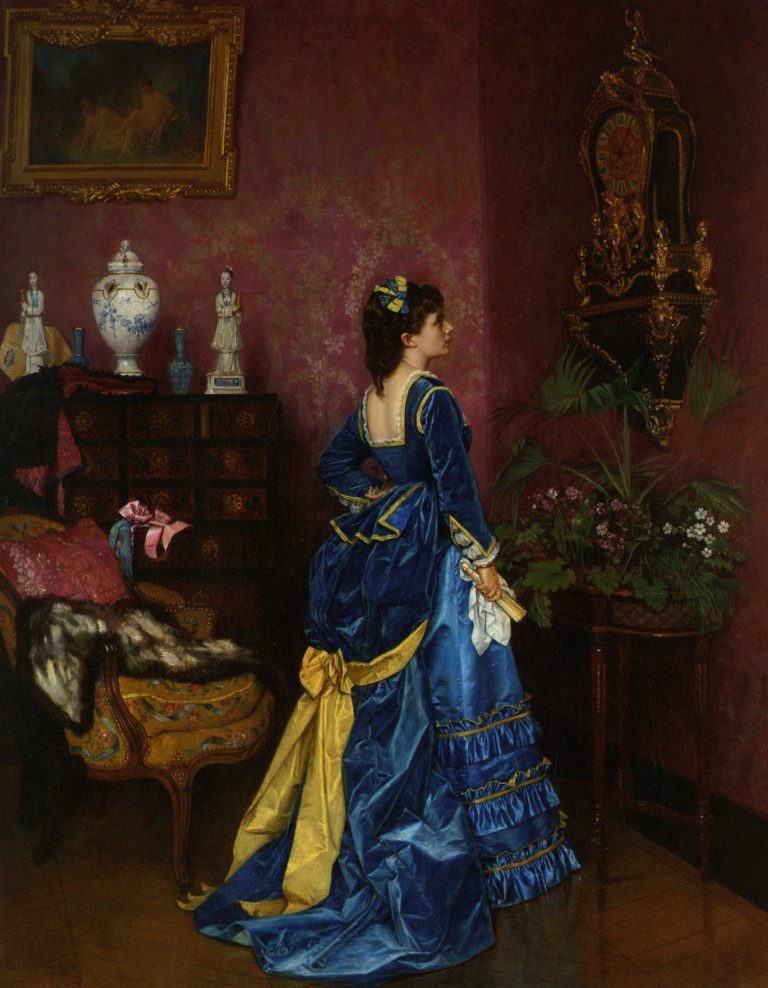 Auguste Toulmouche was born in France, in the city of Nantes, on September 21, 1829. He studied design with a local sculptor and painting with a local portraitist. In 1846, he moved to Paris. There he entered the studio of Swiss artist Charles Gleyre and, by 1848, was ready to make his Salon debut. He was only nineteen years old. 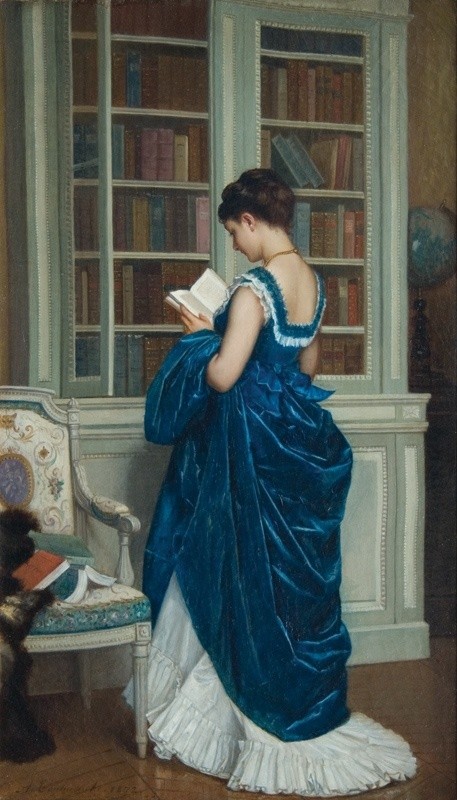 In the Library by August Toulmouche, 1872.

In 1862, Toulmouche married a cousin of Claude Monet. This alliance led to his being asked to mentor the young Monet. Toulmouche advised Monet to join the art studio run by his own teacher, Charles Gleyre. It was there that Claude Monet would meet other up and coming Impressionists such as Pierre-Auguste Renoir, Alfred Sisley, and Frédéric Bazille. Some critics note the influence of Impressionism on Toulmouche’s own later work.

In describing the paintings of Auguste Toulmouche, art aficionados of the day inevitably focused on the beautiful female subjects. Describing them, a critic in the 1874 issue of The Repository writes:

“Only a sweet doing-nothing engages this fair creature, and she lives to wear her beautiful dresses, and be painted by such artists as Toulmouche, Stevens, De Jonghe, and others of the same school. These pictures are only to be studied in a certain way. Examine each fold of the dress, and each figure of the lace pattern. Admire the cabinetmaker’s skill in working out such charming designs, and the decorator’s in painting the walls. Mark the exquisiteness of taste that gives one the very richest upholstery, and costumes of satin and velvet, instead of dull, plebian surroundings. Become absorbed in the consummate execution of details, but do not look for expression, for the rendering of soul-beauty, for that is not truly Parisian in art.” 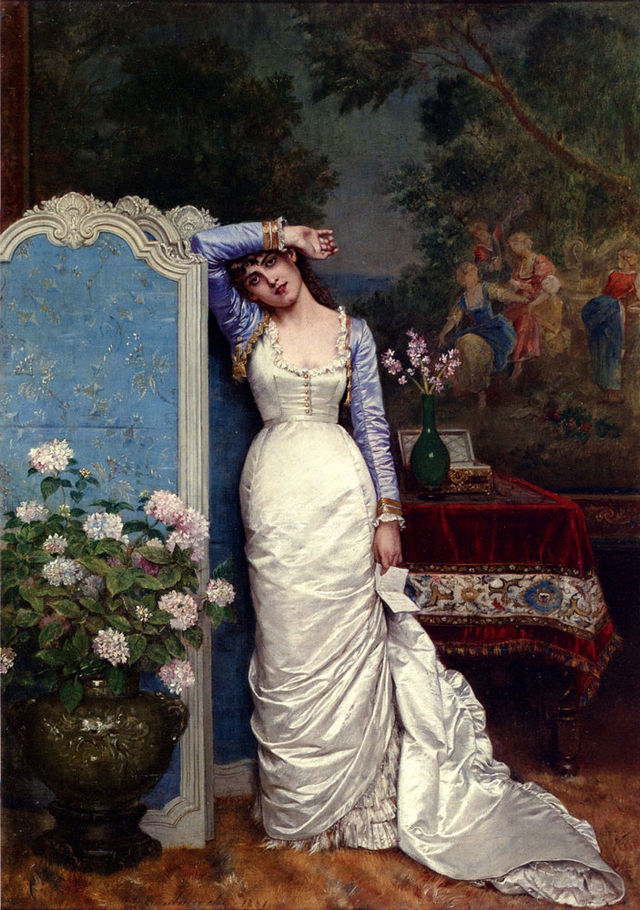 Young Woman in An Interior by Auguste Toulmouche, 1870.

Coupled with the sumptuous gowns and rich interiors, the seemingly idle natures of the fashionable women in the paintings opened them up for harsh criticism from those who felt the depictions to be symbolic of a deeper societal ill. In Philip Hamerton’s 1895 essay "Painting in France after the Decline of Neoclassicism," he writes:

“The women in these pictures have no brains: they are sometimes pretty; they always have expensive tastes; but you never see them doing anything better than lounging, or looking in the glass, or receiving visits from other women as idle and expensive as themselves. It is precisely the women of this kind, whether they live in marriage or in concubinage, who have given that lamentable direction to the public opinion of their own class by which it has come to be held a disgrace to them to do anything of any use. They will not work with their hands; they are too ignorant and incapable for mental labor, and therefore, in the majority of cases, there is some male slave at work for them, who for his reward may see this luxury (which irritates him), and enjoy such conversation as may be carried on with a lady who neither reads nor thinks, nor has ever even acquired that homely wisdom which our equally illiterate grandmothers gathered in the kitchen and the farm.” 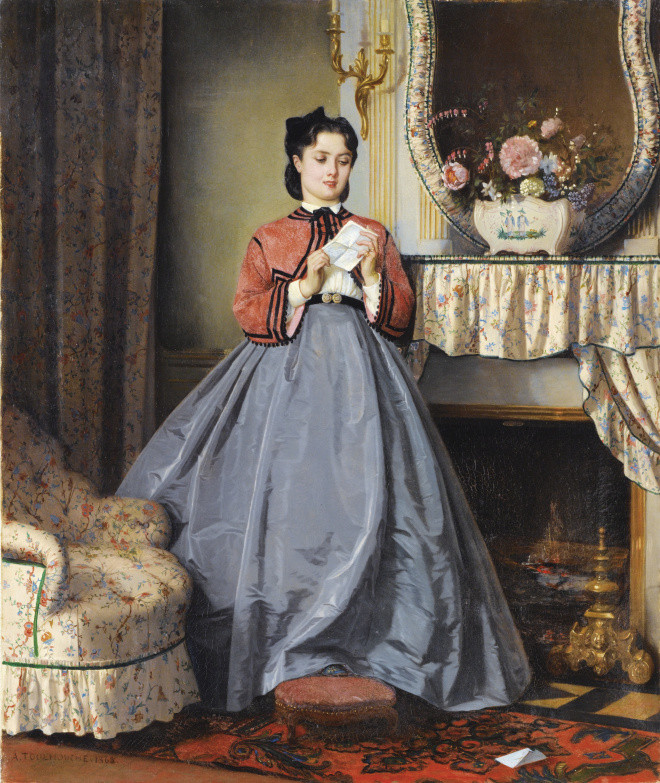 The Love Letter by Auguste Toulmouche, 1863.

The criticism of the women depicted had little impact on the popularity of the paintings themselves. In 1888, the Detroit Art Loan Record reported that “among all the versatile and genial painters in France” none were more sought after and admired by American society that those of Auguste Toulmouche. The same article goes on to declare that:

“Women of the world are fortunate to have found in three representatives of Parisian art men qualified to interpret them with unparalleled success. [Alexandre] Cabanel enjoys the title of painter-in-chief to women, and Alfred Stevens and Auguste Toulmouche share a similar distinction.” 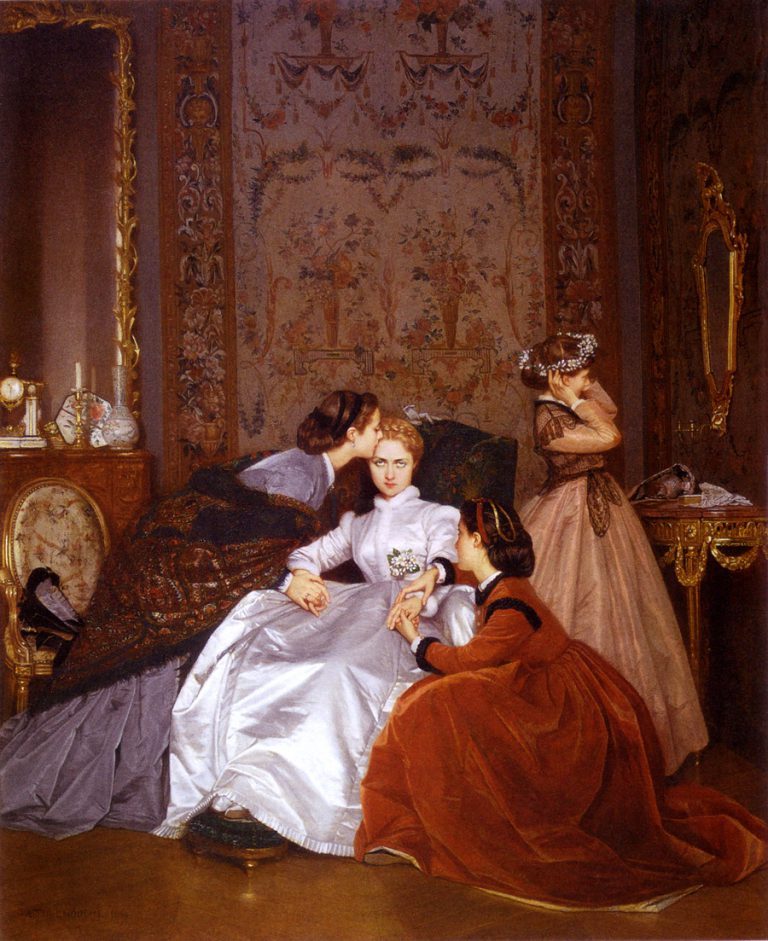 The Reluctant Bride by Auguste Toulmouche, 1865.

Auguste Toulmouche died in Paris on October 16, 1890. Those paintings of his that are not now in private collections can be found hanging in some of the finest museums in the world.

A Look At Ladies' Shawls In Classic 19th Century Literature