Getting The Perfect Panda Photo Requires A Pee-Soaked Costume. This Photographer Tells Us How She Does It. 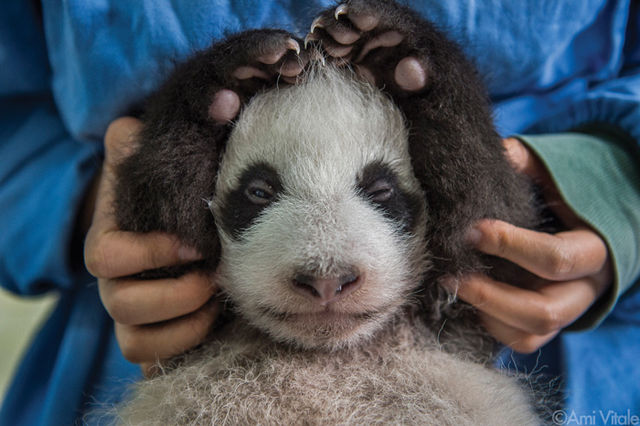 “Males, signaling their social dominance, do handstands on their front paws so they can spray urine as high as possible into trees.” This is how photographer Ami Vitale explains the messy practice that inspired the pee-splashed bear suit she wore while taking pictures for her 2018 book Panda Love: The Secret Lives of Pandas. “Pandas comprehend their home by smell as much as by sight,” she continues. “Bears rub scent on their dish-like ears to pick up faint breezes off the forest floor and send their smells to other bears.” So basically, if you want a panda to trust you, you have to meet them on their turf—and that turf involves pee.

It’s a far cry from the popular image we have of pandas as gentle, dopey giants, but Vitale says this is one reason she wanted to publish Panda Love. “The panda may be the most recognized and the most photographed animal on the planet,” she says. “I wanted to take a story we think we already know and turn it on its head.” To do this, Vitale spent three years in China working with the China Conservation and Research Center for the Giant Panda, whose researchers have been working on breeding the notoriously uninterested-in-sex bears and releasing them back into the wild. “The pandas sent to the wild will have no lines of school children waiting to meet them and no fan pages on Facebook,” says Vitale. “And as these bears trundle off into the forest, they take with them hope for their entire species.” 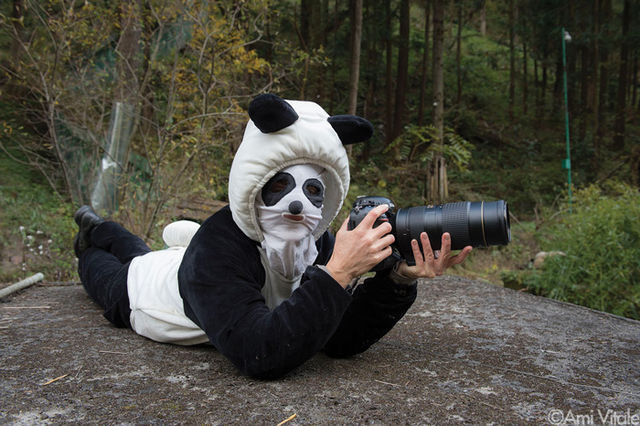 Now 47, Vitale has been a full-time photographer for almost 20 years. Her work has taken her to more than 100 countries; in just the few weeks that we were in contact about this story, she visited 21. She studied international relations in college at the University of North Carolina and received her masters at the University of Miami, then worked for the Associated Press before turning her attention toward photography. “As a young woman, I was painfully shy, gawky, and introverted,” Vitale says. “When I picked up a camera, it gave me a reason to interact with people and take the attention away from myself. It empowered me.” At first, she trained her lens on human subjects in conflict zones, but she began shifting toward wildlife photography as she realized she’d really been photographing nature all along. “The more I document people and their issues, the more I realize I’m also documenting nature, and the more I document nature, the more I realize I’m also photographing people’s lives,” she explains.

Vitale says she found her creative voice by listening to other people, then using her power to amplify the stories of those who wouldn’t normally be able to have their photos published in magazines like National Geographic, where Vitale is a frequent contributor.

Though she has spent time in poverty-stricken areas and war-torn countries, Vitale says Panda Love was one of the hardest projects she’s ever worked on. There was the challenge of finding a new angle for such a beloved creature, yes, but there was also the difficulty inherent in working with huge—and extremely protected—wild animals. “The Chinese treat the bear as a national symbol, and each panda is closely guarded and watched,” Vitale explains. “They are multimillion-dollar bears that everyone treats with kid gloves, and they are highly vulnerable. Getting close, without interfering with their conservation and in a way that is acceptable to their very protective minders, was challenging.”

“They are multimillion-dollar bears that everyone treats with kid gloves, and they are highly vulnerable.”

Pandas raised in captivity often learn not to fear humans. But when you’re working with pandas that will eventually be released back into the wild, as Vitale was, you want them to keep their healthy fear of people. In order to do that, she had to trick them into thinking she’s not a human, and apparently, the best way to do that is by wearing a panda suit that smells like a bear—hence, the pee-stained suit. She also had to gain the trust of the scientists responsible for the bears. In general, Vitale says the pandas, despite having those teeth and claws, are not scary. But she also notes that she had to be “very respectful of their biology.”

It’s difficult to get an exact count of how many pandas are left in the wild, but researchers generally believe there are only around 2,000. Though the number has risen in recent years thanks to various conservation efforts, especially in China, pandas remain a threatened species for a couple of reasons: their natural habitat keeps shrinking due to deforestation, and they’re hard to breed in captivity. Vitale believes that the recent incline in the panda population is a sign of hope for all of us, though, even as we’re bombarded daily with alarming headlines about climate change. “The story of the panda is a perfect metaphor for what we can do to turn things around,” she says. “We are at a turning point and the world is fragile and vulnerable. The choice is ours now. I want to tell people not to feel helpless and remind them that the power of individuals to make a difference is real.” 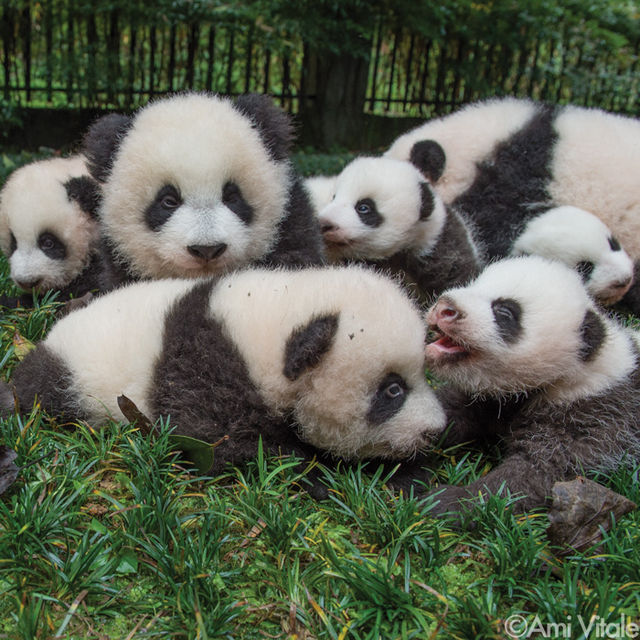 Vitale began working with pandas in 2013, as a member of a film crew documenting the first release of a captive-born panda back into the wild. That panda, Zhang Xiang, is still alive and thriving, and in 2017, she actually crossed into a different reserve than the one where she was released—a first for any panda introduced back into the wild. Vitale quickly fell in love with the lumbering beasts and spent the next three years photographing them from sunrise to sunset, accompanied only by a translator. Another photographer might have buckled from the isolation, but Vitale says the bears kept her company. “Each animal has a different personality,” she explains, “and just like people, you grow attached to certain characters.”

Having wrapped up her Panda Love project, Vitale has no plans to stop photographing the wonders of nature, especially those that are in danger of disappearing; her next projects will take her to Kenya, Mozambique, and South Africa. In fact, she is rarely home—Vitale spent just six days there in 2018—but when she is taking time off, she hangs her camera in Montana. “It captured my heart and just won’t let go!” she says. Her constant travels don’t allow her to keep pets of her own, but her neighbor’s cat and dog come to stay with her during her brief visits. It’s certainly not a life for everyone, but it’s just the way Vitale likes it. “While I have this platform, I’ll work nonstop,” she says, “because I want to inspire others to be good to this planet.” 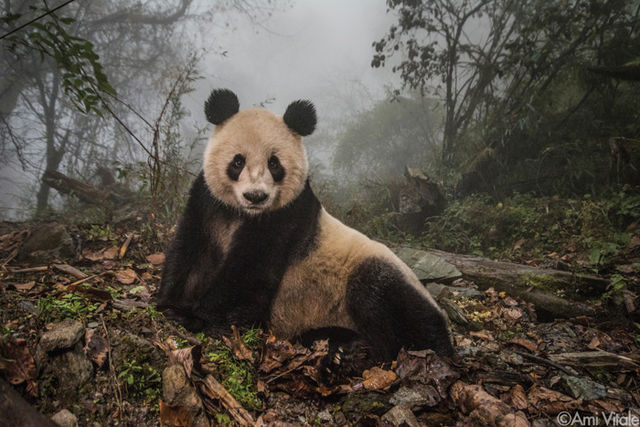 All photos reprinted with permission from Panda Love: The Secret Lives of Pandas by Ami Vitale, copyright 2018, Hardie Grant Books.

Tags: Ami Vitale , photographer , photography , pandas , from the magazine
Support Feminist Media!
During these troubling political times, independent feminist media is more vital than ever. If our bold, uncensored reporting on women’s issues is important to you, please consider making a donation of $5, $25, $50, or whatever you can afford, to protect and sustain BUST.com.
Thanks so much—we can’t spell BUST without U.