"Danger Of Nostalgia": This Artist Bridges Past And Present To Send A Message About Abortion Rights 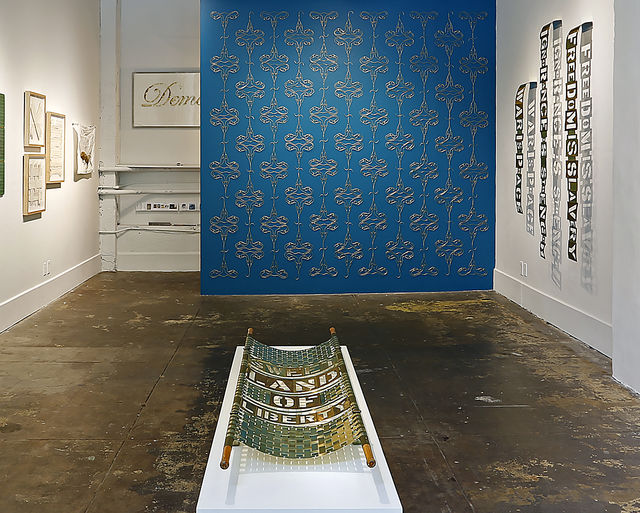 Walking through the door, one is immediately drawn to the cyan wall opposite the entrance of the gallery, saturated with color as deep and rich as peacock's feathers. An initial glance reads the wall as a delicate patterned wallpaper reminiscent of a time that has passed. Walking up to the wall offers a slow reveal and recognition that those elegant patterns are in fact in the shape of the female reproductive system. A step further, and it settles in that these forms are fashioned from gold-colored coat hangers. In that moment of awareness, the artist marks her territory,demands a reframing of initial perceptions and provides an invitation to dig deeper.

"Danger of Nostalgia in Wallpaper Form (in utero)" is the largest of sculptural pieces from conceptual artist Holly Ballard Martz's recent solo exhibition, Pattern Recognition at ZINC Contemporary in Seattle. According to Martz, this wall has been a long time in the making. She began meticulously and painstakingly forming and soldering the 120 wire hangers in 2016.

Martz tells BUST, "I began working on 'Danger of Nostalgia' not long after Trump's inauguration. I was concerned about the escalation in the attacks on women's reproductive rights. At the same time, I was disturbed by the 'Make America Great Again' campaign slogan and its implication that at some unspecified time in the past, our country was considered great." Mainstream America's historical proclivity to romanticize the past provided the catalyst for Martz to connect the present and past to the festering abortion rights crisis as an increasingly right-leaning Supreme Court once again puts reproductive rights at risk. 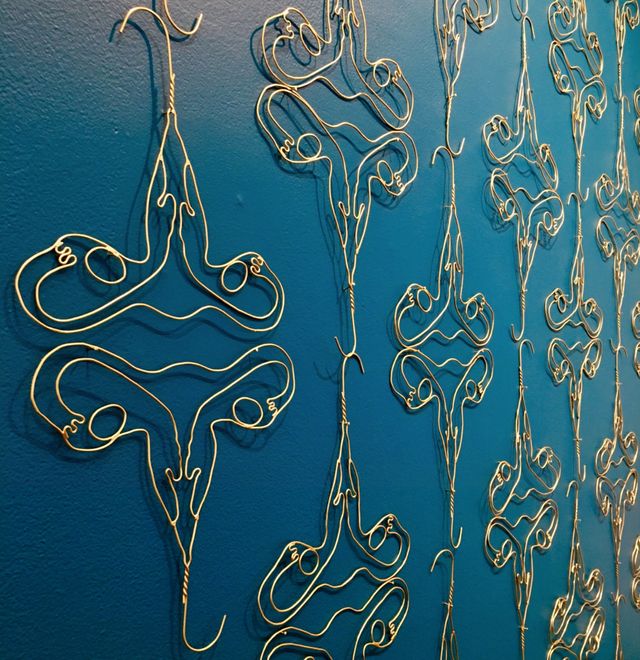 Detail: "Danger of Nostalgia in Wallpaper Form (in utero)"; image courtesy of the artist

Every detail of this wall is meant to heighten this conversation, while raising the ghosts of backroom abortions alongside a long-ago controversy from the mid-19th century. As Martz's vision emerged, she realized that the repetitive pattern of the organic shapes had a Victorian feel and reminded her of the textile designs by founder of the British Arts and Crafts movement, William Morris. Martz says, "I could visualize a full wall of these curlicue forms looking like an ornate wallpaper and that visual prompted me to think of William Morris. I was reminded of an article that I had read about the addition of arsenic from the family arsenic mine to some of the pigments in order to create the rich colors, especially the blues and greens. The result was that the laborers were poisoned as well as the Victorian families who were wealthy enough to hang the wallpaper. The wallpaper was prone to off gassing when damp. It felt to me that this tied in with my initial thoughts on the danger of romanticizing the past and this was the impetus for the choice of a blue-green background."

Morris, a socialist, aligned with the Pre-Raphaelites; he returned to a medieval aesthetic as a means of protesting the dehumanization which accompanied the rise of the industrial revolution in England. Ironically, Morris continued to produce these toxic wallpapers for ten years, dismissing the concerns of private and public medical experts. For Martz, the juxtiposition of poison in wallpaper or danger in coat hangers raised the ghosts of past tragedies and injustices with a warning that "the good old days" were not so good after all. 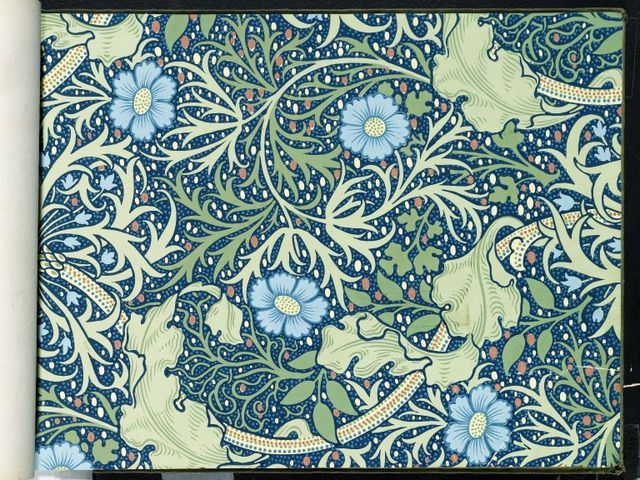 Staying within the same time period, Martz circles back to the influence of patriarchy lurking beneath the surface of this longing for nostalgia. Four sculptural pieces fashioned from vintage, Victorian-era starched detachable men's shirt collars serve as an emblem of the perpetuating male-dominated status quo. "Tower of Power" consists of an arrangement of the collars, hung in equal distance and space, casting a shadow resembling vertebrae of a spine, a nod perhaps to the foundational power structure of every western society throughout time. The other three pieces lie flat against the wall, clearly titled to reveal the artist's perceptions. 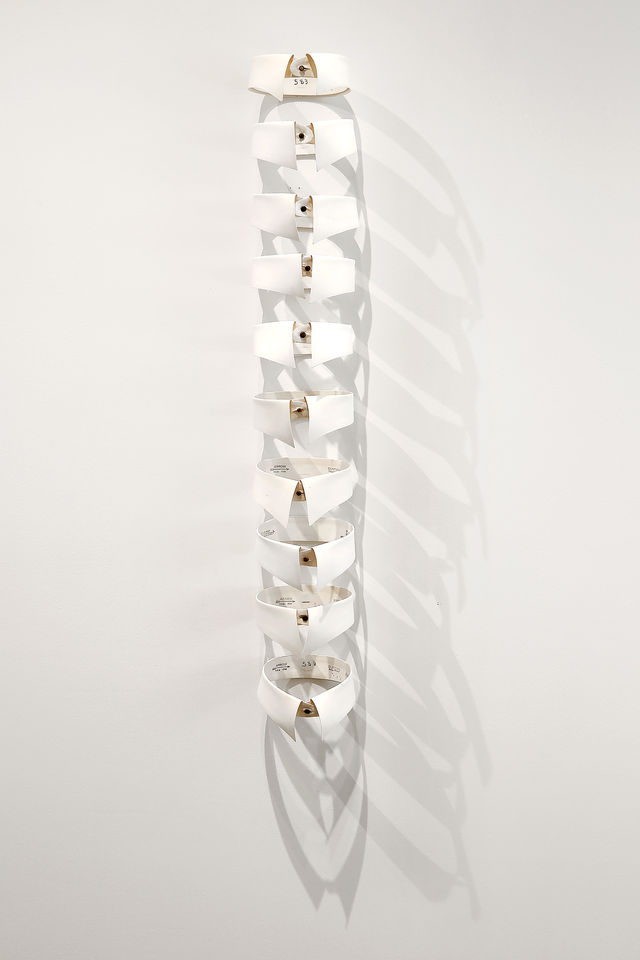 "Stacked" collars laid one on top of each other contain the faintest of text, reading. "Only Straight White Straight Men Need Apply." "Power Grid" is reminiscent of a tic-tac-toe game, serving as a reminder that the game is often fixed. "Double Crossed at Birth" is formed by layering two collars together forming an X, representing the double X chromosome and the inherent historical limitations against women set by society. 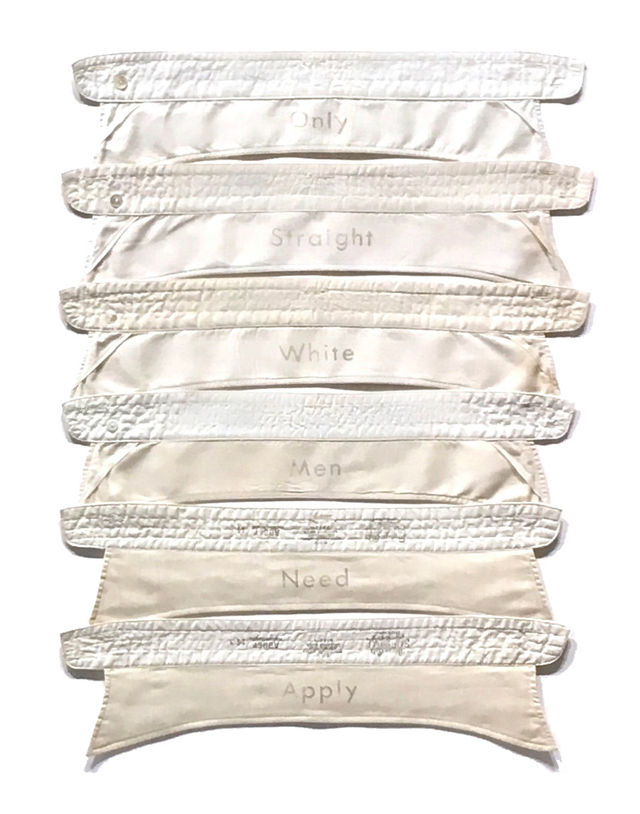 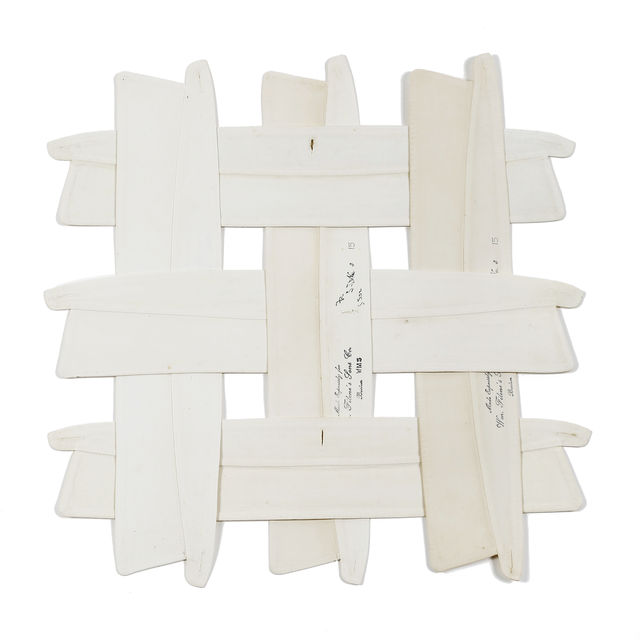 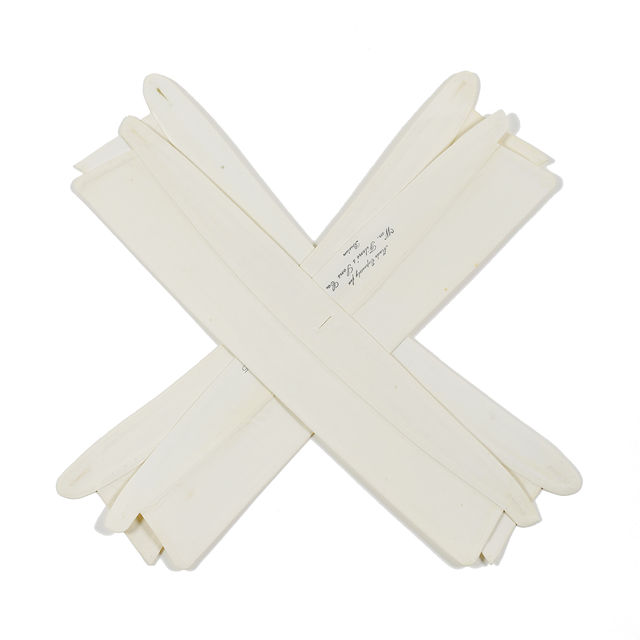 Ultimately, Martz created "Danger of Nostalgia" as a means of engagement. In that spirit, she invited people attending the exhibition to utilize the wall as a selfie backdrop. They were then invited to post the image to their social media, and Martz donated $5 to Planned Parenthood for every post. Beyond this invitation, Martz discovered that the piece served as a means of giving voice to other women on a much more personal level as they shared their own experience of abortion with her. She saw that abortion is still a source of shame for many women, begging the question, "How far have we come?" or more importantly, "How far have we yet to go?"

In the future, what other atrocities will be committed for the sake of an outdated and warped sense of nostalgia? Confronted with these powerful pieces, the viewer is forced to return to the past with an eye towards the present and the future. With her work, Martz calls the bluff of anyone who has ever placed that red MAGA cap on their head.

Frida Kahlo's Clothing, Jewelry, And Makeup Will Be Shown In The US For The First Time

Amy Pleasant is a Seattle visual artist and Art and Social Justice writer. Her figurative and abstract work is exhibited nationally and in Amsterdam and is in private and corporate collections throughout the Pacific Northwest.Her writing as an Arts and Culture contributor for the Huffington Post and her blog, Life Meets Art at amypleasantseattle.com and on Instagram @amypleasant_seattle

Tags: Danger of Nostalgia , Holly Ballard Martzher , art , abortion rights , reproductive rights
Support Feminist Media!
During these troubling political times, independent feminist media is more vital than ever. If our bold, uncensored reporting on women’s issues is important to you, please consider making a donation of $5, $25, $50, or whatever you can afford, to protect and sustain BUST.com.
Thanks so much—we can’t spell BUST without U.