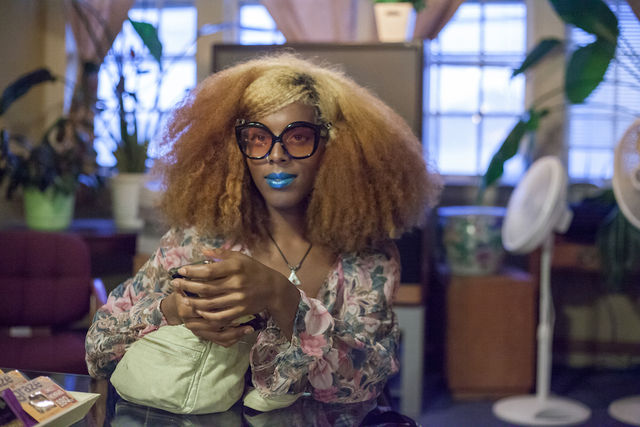 Juliana Huxtable is wearing blue lipstick, bright pink tights, a plaid miniskirt, and a floral top when she goes onstage at Detroit's Church of the Messiah—a 130-year-old building that's home to a social justice-minded congregation—to speak about "Seeing and Being Seen." She's part of a panel on the subject as part of Culture Lab Detroit; later, she'll end the day with a 1 a.m. DJ set at the nightclub Olympus Hall.

This ability to be equally at home speaking on a panel at a church, lecturing in an art museum, and DJing at a nightclub—and to move seamlessly back and forth between creating visual art, performing, writing prose and poetry, DJing, and creating music—is "very natural" for her, Huxtable tells BUST, and not so unusual: "Some people have a day job and a night job and a side gig and a band with their friends. I think the difference with me is that all the things I do are highly visible." 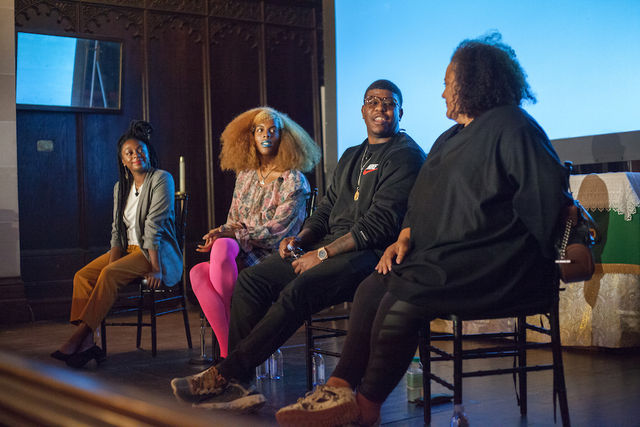 Huxtable's work includes self-portraiture, music, photography, performance art, poetry, a sci-fi novel, the "nightlife gender project" #SHOCKVALUE, and many, many other works. Huxtable is trans, she often uses her own body as her primary subject, exploring gender, race, queerness, and identity in her work, as well as art history, the internet, and science fiction.

I spoke with Huxtable ahead of her appearance on the Culture Lab Detroit panel; she talked about her "hibernation"-style creative process; how travel and place inform her work; and why Instagram can't rival the micro-communities of Tumblr back in 2010.

You work in a lot of different forms—visuals, music, performance, writing. How do you see them relating to each other?

Most people go to school, and they study painting, or they study sculpture, or they have a specific combination of things that's a result of a somewhat intentional relationship to education or training. But I came around to my practice sort of coincidentally—I wanted to be an artist since I was young, but I assumed that that wasn't something that I would be able to pursue. I came to what I was doing through a series of coincidences: a situation presents itself, or I have the impulse to express myself in a certain way. There's a freedom I feel relating to genre that has resulted in a practice that is multidisciplinary. I don't really think so much about how they all relate to each other. Sometimes I'm drawn to figurative work, sometime I'm drawn to textual work, sometimes I'm drawn to a video or a text piece. Sometimes something that I plan as a text piece will end up as a video, because it feels inappropriate in that format.

How about social media? Do you see an Instagram post as being a form of art, or having the possibility to be a form of art?

I think it has the possibility to be, but I don't see it as that for me. For some artists, the motifs and formal constraints of something like Instagram or Twitter is an interesting way for them to interrogate their practice itself, so there are artists where that is their primary medium, or the stage on which their work plays out. I don't think that's necessarily true for me. I think at one point, something like Tumblr was the closest thing I had to a direct relationship between what I wanted to say artistically, and how it existed as a product of social media. But that's changed for me. I sort of enjoy the fact that, although obviously my work is documented on social media, how I interact with social media—enjoy social media, even thrive—is not in that context.

Tumblr in the time that you were active there seemed like such an interesting, thriving community, and is now not so much that—I don't know if there are other social media platforms that are like that now, or if it's just that I'm older and don't know about them.

I joined Tumblr in, I think, spring of 2010, through maybe 2015 was when I was really active. And then my work started to move in a different direction, and my relationship to social media changed from something that was part of a micro-community to something that felt more generally visible. It doesn't feel like the place where experimentation is happening for me. Both of my parents were techie people, so I had a Xanga, I had a Geocities, I had an Angelfire, I had a Livejournal, I had a Blogspot, I've done MySpace, LastFM. You name it, I've done it. So I don't think for me it is a product of age.

I think the cycles by which social media platforms become outmoded can no longer keep up with demand. At one point, the idea of a social media platform itself was a somewhat novel social phenomenon. So Tumblr was a self-segregating audience with a particular set of interests. But something like Instagram changed what that meant, because it set out to be a really, really wide, net-reach mentality, almost a universal. In the way that gmail is to email, Instagram sought to be to a certain kind of visual social media. I think that platforms that announce themselves as wanting to be the universal standard almost function as some sort of institution. And I think when Tumblr was purchased by Yahoo, that happened—not that it was less corporate before, but I do think that when it was purchased by Yahoo, Yahoo changed the algorithms, it changed the search results, because they wanted to make Tumblr competitive as a wide-reach social media platform. I think the idea of an audience-specific, socially novel form of social media is maybe...I don't know what that looks like right now, maybe it does exist, maybe I'll find it.

When people write about to you, they often tie you and your work to New York. Do you think that being in New York is something that's a big part of your art?

I think my work is informed by New York, just because I've lived there—I've lived in or directly adjacent to New York since I was 18, which is 12 years of a certain mentality. But I feel like at this point, New York always informs, and I thrive there and I love New York, but—not that I want to move somewhere else—there's a certain flexibility with my work that I feel by how much time I spend in other places. There was a solid three to five years where I didn't leave New York at all; the longest I left was maybe three days. And during that period, my work directly reflected my immersion in New York, and also the financial constraints and things like that that New York places on you.

Now, as my work progresses, it's also in conversation with other things. Even just the fantasy of being somewhere else, or the experience of being in another city for a while, or a different way to relating to a place racially—that changes how I understand what a different aspect of my work represents. Spending six weeks in China will affect how I see different aspects of my work and what they signify culturally. I came to Detroit from New York, but I was only in New York for like four days before coming here; I was in Berlin before that. I won't be back in New York for 12 days, and then I'll be back for 4 days, and then I'm going to Brazil, and then Baltimore.

How do you take care of yourself, and how do you keep creating, when you're traveling so often, moving through time zones, and working so much?

I have to be intentional about carving out space. I also find that generally, the way my year goes is that by the end of fall I'm overworked, and then winter through spring is my hibernation where I get a lot of my [creative] work done. I'm on the wildlife schedule. Also, my schedule is very regimented, so I work really, really hard summer and fall. This year, maybe a little too much. It allows me to take like five months and just work and be around my friends and go out and dance.

Could you share anything about what you're currently working on?

I am currently working on a new body of work, and I'm working on music. That's really one of my main focuses, because I'm releasing music next year. A lot of my performances have become more musically oriented, because it's become a way for me to experiment with what I'm working on.

When you do something like your DJ performance later tonight—how do you prepare for that?

I'm glad you remind me of that, because I lost my USB, so I have to find a USB before I play tonight—I need to find a CVS or something.

"Detroit Is Not A Blank Canvas": Art And Activism At Culture Lab Detroit 2018

Tags: Juliana Huxtable , art , interview , BUST interview , Culture Lab Detroit
Support Feminist Media!
During these troubling political times, independent feminist media is more vital than ever. If our bold, uncensored reporting on women’s issues is important to you, please consider making a donation of $5, $25, $50, or whatever you can afford, to protect and sustain BUST.com.
Thanks so much—we can’t spell BUST without U.