"Detroit Is Not A Blank Canvas": Art And Activism At Culture Lab Detroit 2018 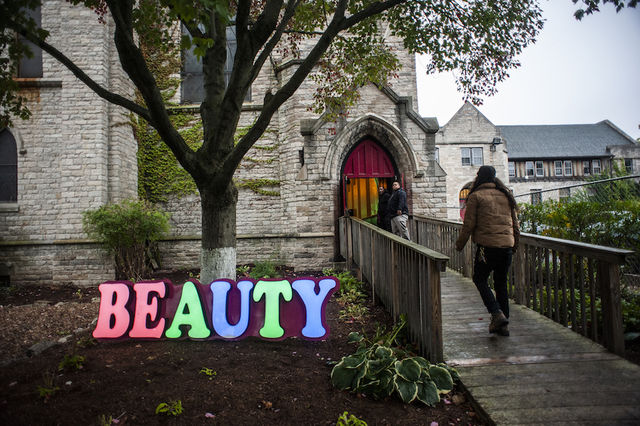 Take it from activist, filmmaker, and writer dream hampton: your conception of Detroit's "rebirth" is probably wrong. "People don't want to talk about race," hampton tells me. "There's this idea that has been given to a whole generation that to talk about race is racism, which is nuts. So they don't want to talk about the idea that a 'rejuvenation' or a 'Renaissance' is couched in this idea that white people are finally moving back to Detroit—spoken or unspoken. Black people have always been here, always been creative, always been creating, and it never stopped. It didn't stop in '08. It didn't stop with the collapse of the auto industry."

hampton tells me this in a small sacistry at Detroit's Church of the Messiah, minutes before she takes part in a panel discussion on the subject of "Seeing And Being Seen" with artist Juliana Huxtable and Ghetto Gastro founder Jon Gray, moderated by the New York Times Magazine editor Jazmine Hughes. The panel is part of three days of events put on by Culture Lab Detroit, a nonprofit organization formed by Jane Schulak in 2012 with the mission of "aid[ing] Detroit in becoming a city that prioritizes the arts as a mean for community investment, sustainable neighborhood development and social change." This year's theme: the Crisis of Beauty. Along with holding panels (and a screening of Robocop) open to the public, Culture Lab Detroit took visiting artists and journalists, along with local artists and organizers, on a whirlwind tour of the city's arts and cultural spaces. We were led by Ingrid LaFleur, an Afrofuturist artist, activist, and former Detroit mayoral candidate who works with cryptocurrency; and Bryce Detroit, an Afrofuturist storyteller, Entertainment Justice activist, and Detroit Recordings Company founder. The experience ran counter to the mainstream narrative that, as hampton puts it, "There's this idea that Detroit was a blank canvas. And it's not that." 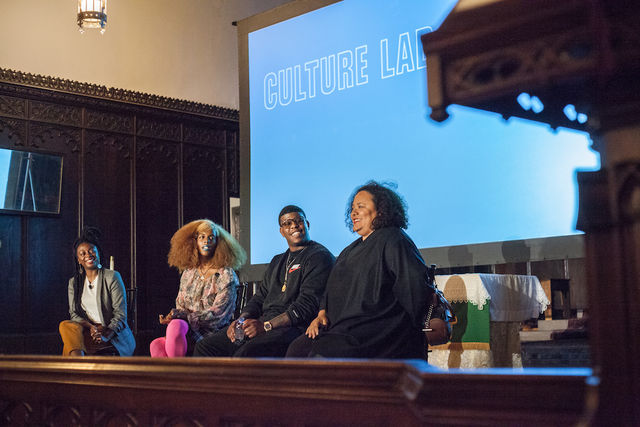 I grew up in a small town about an hour from Detroit, which meant I'd that seen more of Detroit than most of the other national journalists invited to cover Culture Lab. Growing up, my experience of Detroit was class trips to the Detroit Institute of Arts; family trips to the Motown Museum; concerts at the Fillmore as a college student home for the summer; the Detroit Auto Show. But Michigan is intensely segregated: my hometown, Hartland, is 97% white despite being less than sixty miles from Detroit, which is 80% black. I'm white. I'd been to Detroit before, but I hadn't seen Detroit like this before. It was a tremendous experience to get a glimpse of the vibrant art community that thrives, and has always thrived, in the city.

After a visit to Mirage Detroit—a site-specific mirrored house installation by L.A. artist Doug Aitken in the old People's State Bank—we spent some time at Recycle Here! / Make Art Work, an art space that's part of Detroit's Recycle Here! recycling center. The recycling center was formed in 2005 to meet a community need—and it keeps community a focus, both with residents who drop off their recyclables, and with the artists who visit, hang out, and collaborate there, often reusing recycling pieces. A highlight was a giant, plastic elephant that could be wheeled around the space by remote control—playfully joining circles of people chatting and drinking Motor City Brewing Works' Ghettoblaster and orange Faygo. Colorful murals—including one of Elvira—cover the walls, and a neon sign reading simply "BUTTS" shines red outside. 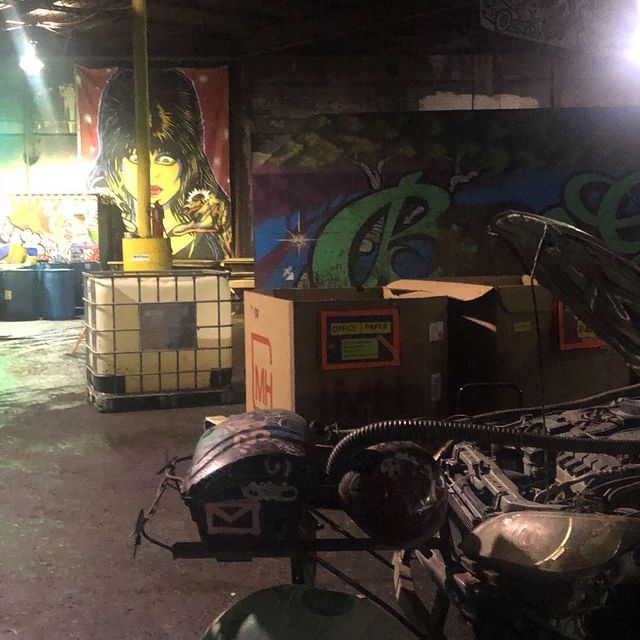 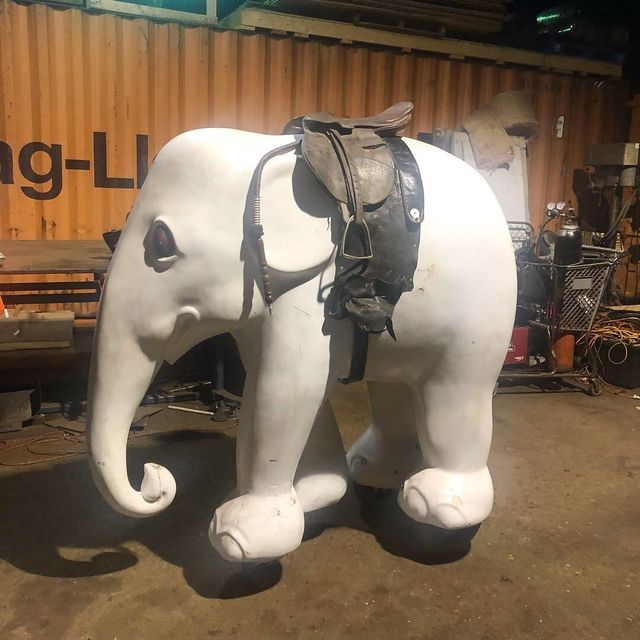 The next day began with a visit to Submerge Records' techno museum. Many people think that techno began in Berlin—nope, it's Detroit. International DJ, Underground Resistance member and Manager of Submerge John Collins walked us through us a brief history of techno, describing the genre's connection to social justice and a push for political change. Afterward the tour, Anishinaabe and African diasporic artists and activists including Efe Bes, Sacramento Knoxx, Onyx Ashanti, and Christy Bieber discussed music and language. 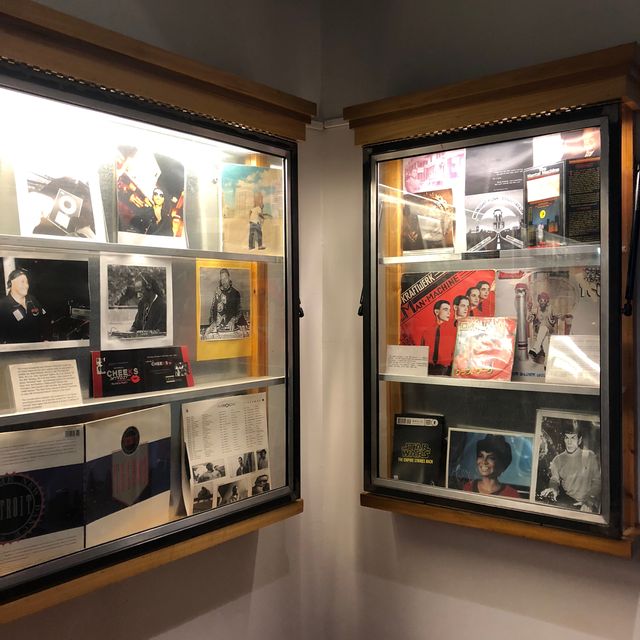 a display on techno history at Submerge Records; photo by Erika W. Smith

We moved from music to visual art with a visit to the remarkable C.A.N. Art Handworks, home to metalsmith Carl Nielbock's windmills,  architectural and ornamental metalwork, historic reproductions, and stunning collection of African art. Born in Germany to a white German mother and black American G.I. father, Nielbock moved to Detroit in the 1980s and has lived and worked there ever since. As he gave us the tour, Nielbock stressed that you don't need to be formally trained to create art. 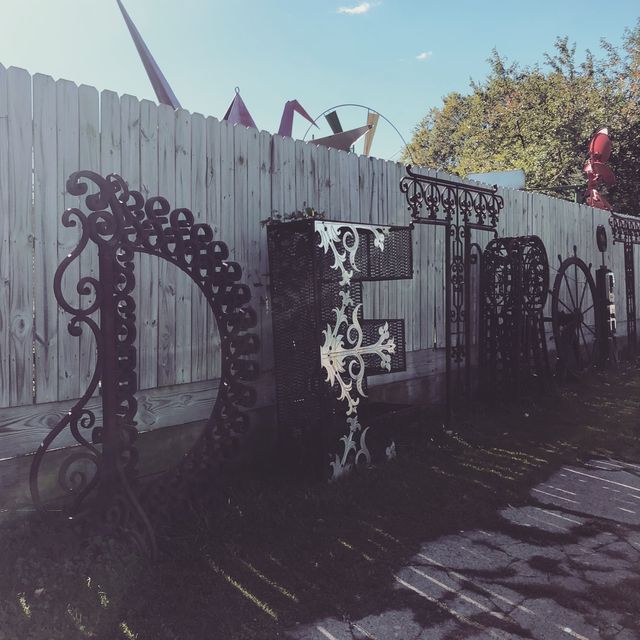 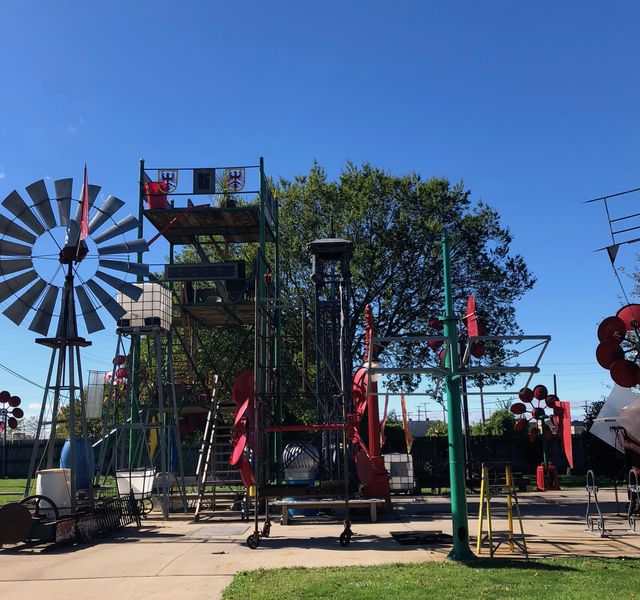 the windmills at C.A.N. Handworks; photo by Erika W. Smith 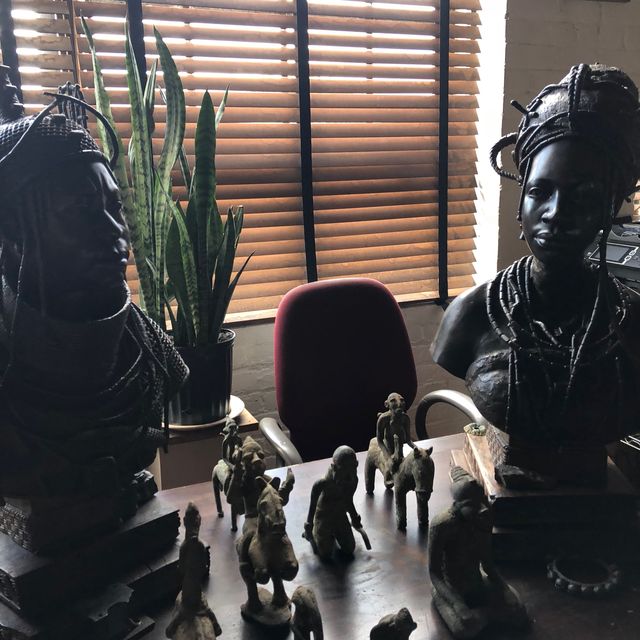 Held in the Senate Theater, a historic 1920s movie house, the first panel topic was "The Aesthetics Of Tomorrow." After an performance of "Sweet Grass" by Sacramento Knoxx, Giizhigad, Kaz, and Hadassah GreenSky highlighting the indigenous community in Detroit—and an introduction by RoboCop actor Dr. Peter Weller—who has a PhD in art history—moderator Yesomi Umolu (Artistic Director of the 2019 Chicago Architecture Biennial) led artists Anicka Yi, Mark Pauline, and Eyal Weizman in a discussion the role of technology in shaping the future. 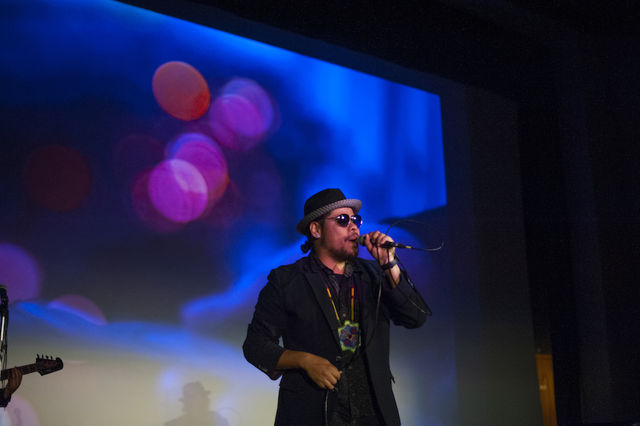 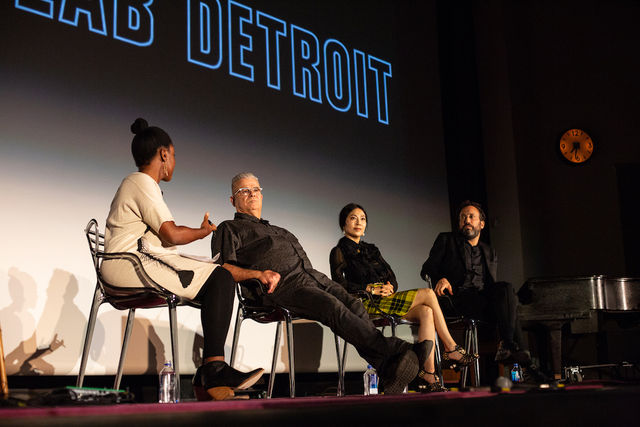 The final day began with a visit to Dabls' MBAD African Bead Museum. A must-see if you're in Detroit, the museum was founded by artist Olayami Dabls—known to most as simply Dabls—and it's a work of art in every way. The inside of the museum houses an extensive, historic bead gallery; the outside of the building is covered in murals and mirrors; and nearby, there's an large-scale outdoor art installation, the mural-covered N'kisi House, and the African Language Wall painted in various characters. Dabls walked us through the installation, explaining a metaphor in stone and iron, wood and mirror. 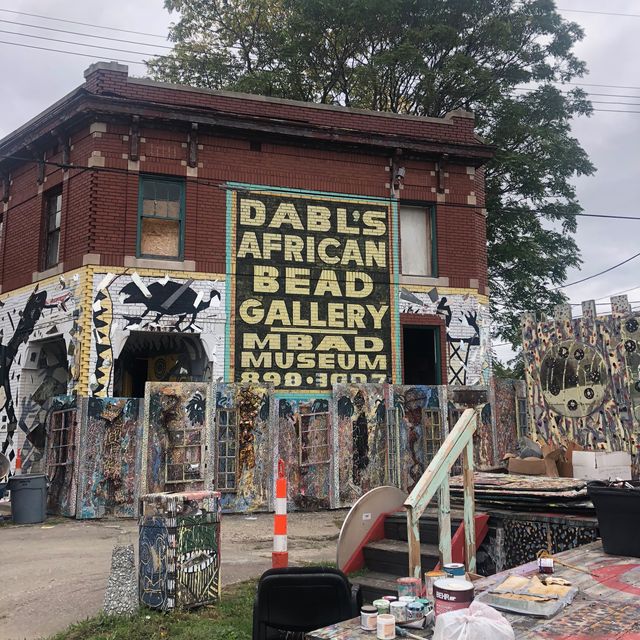 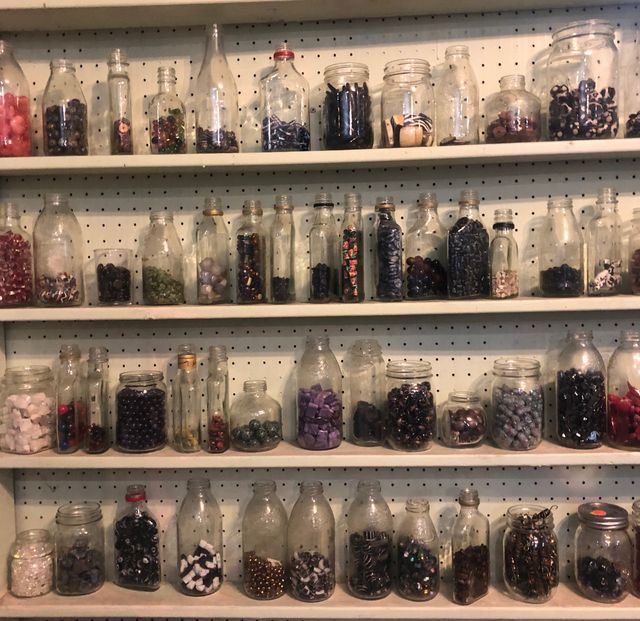 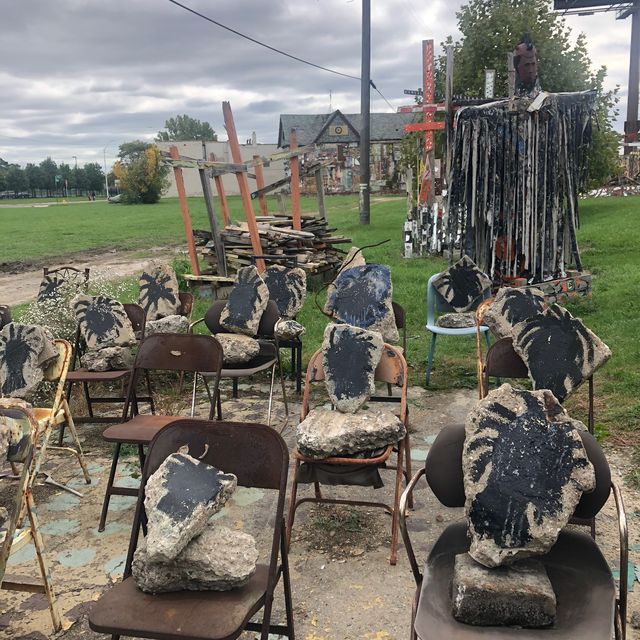 one of Dabls' outdoor art installations, with N'kisi House in the background; photo by Erika W. Smith 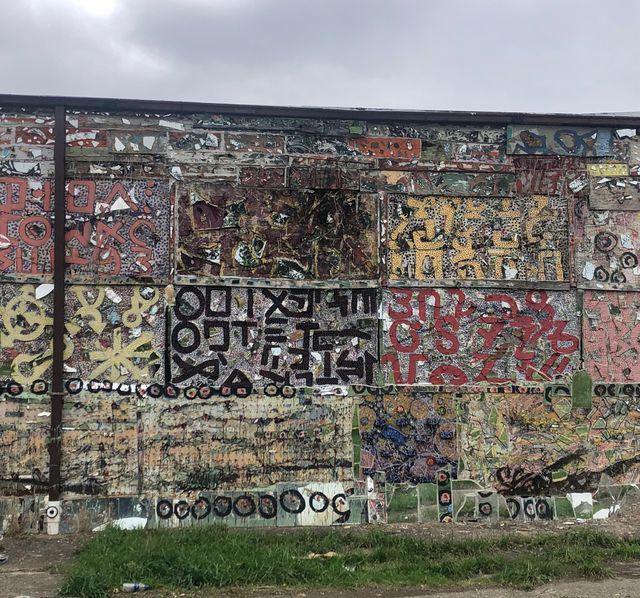 Next, a break from visual art: Oakland Avenue Urban Farm, a fast-growing urban farm and nonprofit, community-based organization. Director Jerry Hebron gave us a tour, sharing plans for expansion (the farm has absorbed foreclosed land inthe neighborhood) and hosting a lunch and a discussion with Detroit artists including writer Marsha Music and activist Uri House, who uses mesh technology to bring WiFi to the 40% of Detroiters who need it. 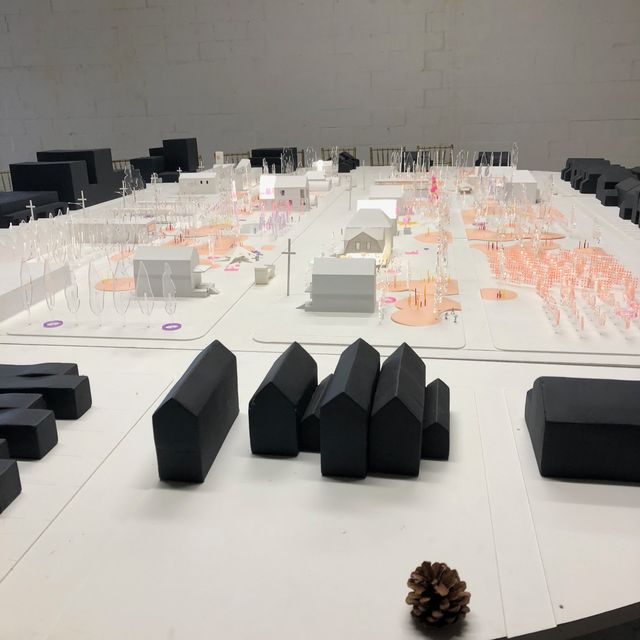 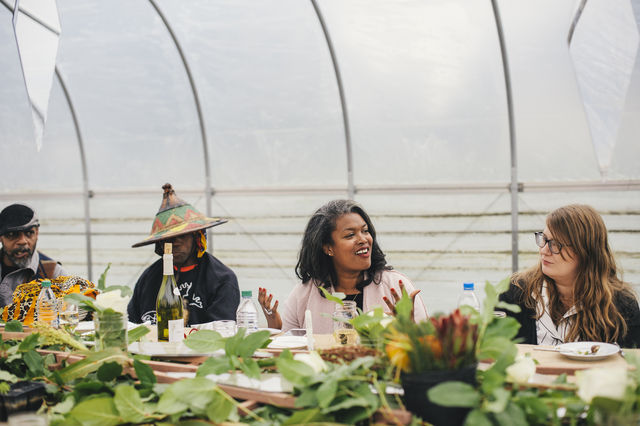 Drinks at dream hampton's beautiful apartment, the aforementioned panel on "Seeing And Being Seen" panel, and we were done—Culture Lab Detroit ended with attendance at the Detroit Museum of Contemporary Art's gala, currently displaying Tyree Guyton's Heidelberg retrospective exhibit, a rumination on the 30 years of the Heidelberg Project—a large-scale public art installation that Guyton began on Heidelberg street on Detroit's East Side in the 1980s. 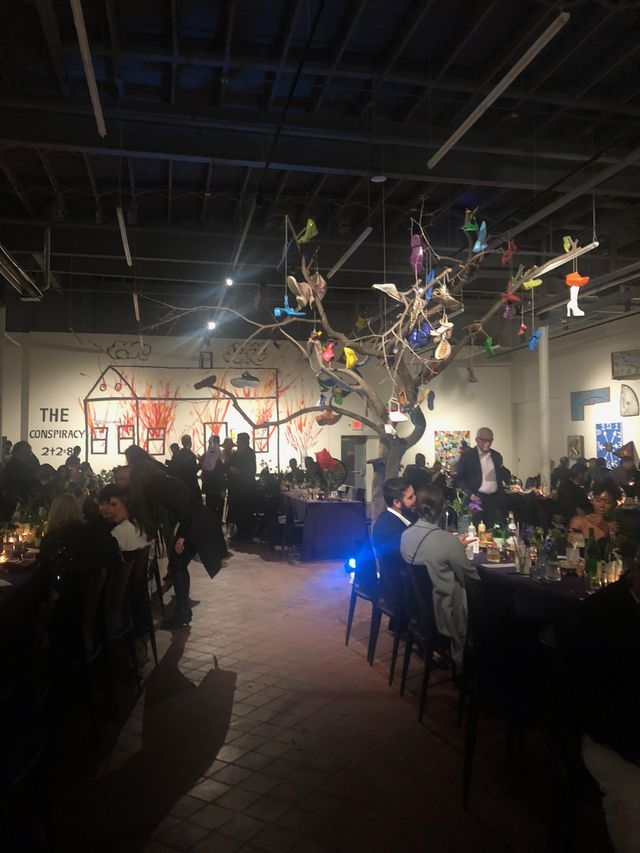 I'm immensely grateful that I was welcomed with such generosity by Detroit's artists and activists—I can't wait to go back, and I urge you all to do the same. When you do, make sure you go beyond the headlines and seek out the thriving Detroit art scene that's always been there, and always will be.

Top photo: Church of the Messiah with Culture Lab signage outside; photo by Gabriela Baginski