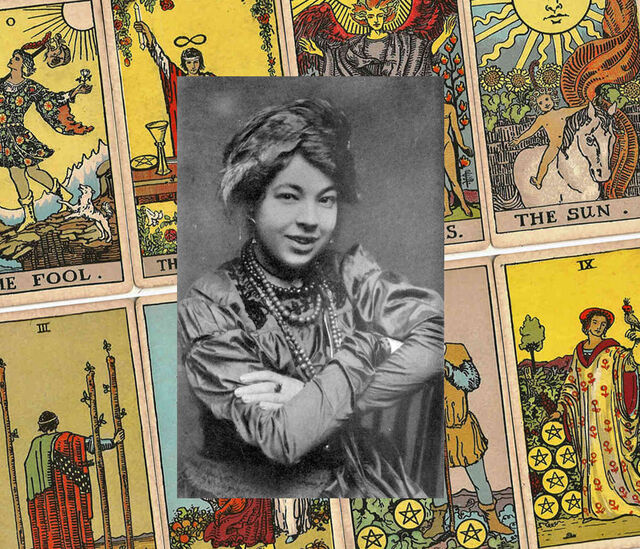 Pamela Colman Smith was a gifted artist who had a love for the occult. She illustrated the world's best known tarot cards, as well as books by Bram Stoker and W. B. Yeats, AND she contributed artwork for the women’s suffrage movement. And yet, her works are often overlooked; she even gets omitted from her own tarot.

Pamela (known as Pixie to her mates) was born in Pimlico in London in 1878. Her family then moved to Manchester before heading to Kingston, Jamaica when she was 10.

Pixie became engrossed in Jamaican culture and folklore, something that would influence her work throughout her career. She even wrote and illustrated a book of Jamaican folktales called Annancy Stories that’s still in print today.

In 1893, Colman's family moved to Brooklyn, and Pixie went to the very fancy avant-garde Pratt Institute to study art and illustration. Sadly, she had horrific health issues throughout her three years there, and thus never graduated.

BUT, Pixie was a ridiculously talented student. Even without a degree she immediately started getting paid work as an illustrator (which as anyone with an art degree will tell you, is stupidly impressive!).

One of Pixie's first paid gigs was working with Bram Stoker (Y’know, that goth bloke who wrote Dracula).  This proved to be a really enriching and satisfying partnership, with Pixie illustrating both his book on famed Shakespearian actress Ellen Terry and his final book The Lair of the White Worm.

Pixie had a knack of working with equally amazing writers, like W. B. Yeats on his (imaginatively titled) The Illustrated Verses of William Butler Yeats.

A CHANGE OF SCENERY

Sadly, Pixie’s beloved mother passed away in 1896. Needing a change, Pixie joined a travelling theatre group as a set designer (as you do).  This period really influenced her artwork with grand theatrics, bold prints and colors galore.

While doing all these varied projects, our girl still found time to support women’s suffrage. She provided artwork for the cause in America, coming up with bold and simple designs that got the message across.

One of Pamela's suffrage artworks

Her friendship with Bram Stoker and W. B. Yeats led Pixie to become a member of the occult-loving group the Hermetic Order of the Golden Dawn in 1901. The group, made famous by Aleister Crowley, had a fascination for all things occult, supernatural and weird.

And it’s this world of all things creepy that would influence Pixie in her most famous work.

Arthur Edward Waite was a fellow member of Golden Dawn, and he took an interest in Pixie’s artwork. See, he wanted to created a new tarot deck that would help bring tarot into the mainstream, and he reckoned Pixie was the artist for the job.

A quick explanation of tarot for those of you who are unfamiliar: Tarot cards are a deck of usually 78 individual cards, and are used for foretelling and insight. You have the main arcana made up of 22 cards and a set of minor arcana split between wands, swords, pentacles and cups. Each card has a different meaning and by grouping cards selected at random you can compose a story or reading for yourself or another person.

Pixie was given free reign to revamp tarot and she really sunk her teeth into it.

She came up with a set of theatrical cards that really refined each one’s individual meaning. The most astonishing part is that Pixie was able to create the entire deck, almost 80 individual pieces of art, in just 6 months.

The Waite-Smith Tarot. All of these designs are from Pixie.

Waite wrote a book to accompany the set, and it was first published in 1909 by the publishing house Rider. The deck went on to become the most popular and recognised tarot deck in the world, but it’s just referred to usually as the Rider-Waite Tarot, which omits Pixie's name.

WHICH IS A FUCKING TRAVESTY!

As so many of these stories do, Pixie’s had a bit of a shit ending. She moved to Cornwall and died in obscurity as a pauper in 1951. And yet, in such a short space of time, Pixie had an incredibly diverse and interesting career that spanned across multiple art forms. It’s a travesty that she isn’t recognised for her work, particularly for bringing tarot into the mainstream and giving the cards new life.

THAT WAS INTERESTING, HOW CAN I FIND OUT MORE?

Well, if you fancy reading some of Pamela’s work, her storybook Annancy Stories is still in print. And if tarot has piqued your interest, Marcus Katz has written an interesting guide on the Waite-Smith Tarot that includes more of Pamela’s history and influences.

Meet Madge Syers, The First Woman Figure Skater To Medal At The Olympics

Tags: Tarot , art , feminism , W. B. Yeats , Bram Stoker
Support Feminist Media!
During these troubling political times, independent feminist media is more vital than ever. If our bold, uncensored reporting on women’s issues is important to you, please consider making a donation of $5, $25, $50, or whatever you can afford, to protect and sustain BUST.com.
Thanks so much—we can’t spell BUST without U.