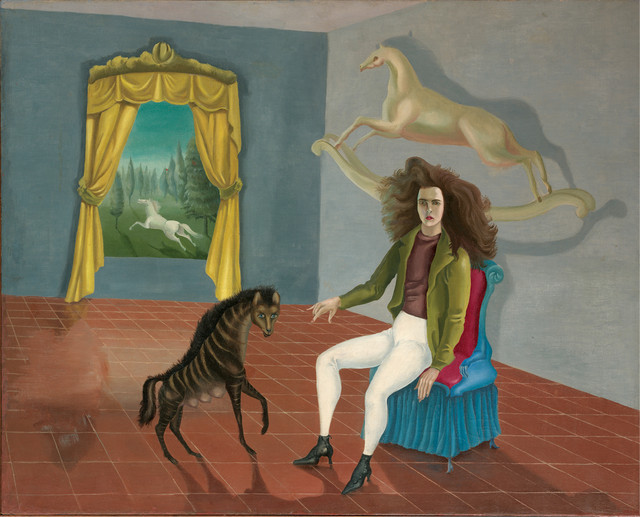 In a movement dominated by male artists, Surrealist Leonora Carrington embraced independence to ensure her place in history as more than a muse
By Lynn Peril

At the heart of the oil painting Self-Portrait (Inn of the Dawn Horse) is a young woman dressed in pants, a jacket, and Victorian boots. Seated on a chair with similarly booted feet, she reaches out to a hyena with milk-swollen teats. A rocking horse hangs on the wall, while outside the window a live horse runs away. Despite the odd surroundings, the woman’s gaze is direct and challenging. She’s so modern looking she could easily be sitting across from you on the subway—but this painting was made in 1937, by the Surrealist artist Leonora Carrington.The work is a tour-de-force by a 20-year-old artist declaring her arrival on the art scene, as well as her independence from social expectations. Dreamy, spooky, and populated with mystical creatures, the painting is pure Carrington.

Carrington was a free spirit who railed against every role she was supposed to conform to, from the bourgeois behavior of her family to the sexist expectations of her fellow Surrealists. She was kicked out of schools, partied in Paris with Max Ernst and Pablo Picasso, and escaped both the Nazis and a mental institution, all before age 24. Perhaps most impressively, she wrote, painted, and sculpted throughout her life, creating mystic work that made an indelible mark on a genre that art history has lead us to believe was defined by men.

“The only person present at my birth was our faithful old fox-terrier, Boozy, and an ex-ray apparatus for sterilizing cows,” Carrington declared in a 1965 essay. Reality was more mundane, but dazzling nonetheless. Born to great wealth in 1917, Carrington grew up in the English countryside surrounded by servants and doted upon by an Irish nanny. Carrington’s mother and grandmother were also Irish, and the folktales the three women told—of ghosts, fairies, and magic—helped form the artist’s iconography. Carrington began drawing at four, and never stopped.

While her creative instinct was natural, an affinity for school was not. Sent to a convent boarding school at nine, Carrington became fascinated with miracles. The nuns deemed her “mentally deficient” and she was expelled. (“I probably overdid it,” she said later. “I liked the idea of being able to levitate.”) Sent to another convent school, she was again expelled, this time for playing the musical saw. (Her seemingly Satanic ability to write with both hands, as well as backward with her left, also disturbed the nuns.) A stint at a boarding school in Florence exposed teenage Carrington to 15th-century Italian artists, who, according to art historian Susan Aberth, “contributed to her love of tempera painting and influenced her composition, palette, and style.” But a bout of appendicitis sent her home again. At 17, she was packed off to finishing school in Paris and, no surprise, expelled a few months later. When her exasperated father sent her to yet another Parisian school, she ran away.

Back in London in 1934, Carrington went through the social rituals of upper-class English life: a debutante ball, the races at Ascot, and presentation at the court of King George V. But she had no intention of being, as she termed it, “sold to the highest bidder.” Carrington’s 1939 short story ,“The Debutante,” reflects her mindset during this period. An affluent young woman becomes friends with a female hyena at the zoo. One day, the woman tells the hyena, “What a mess of shit...I must go to my ball this evening.” The hyena agrees to take her place at the dance, while the debutante stays home and reads Gulliver’s Travels. The evening is a great success, until the debutante’s mother recognizes the hyena.

“We need a wife, like men have, so we can work all the time and somebody else would take care of the cooking and the children.”

Art was Carrington’s escape from debutante life, a “fuck you” to the path she was expected to take. Though her parents objected, she enrolled in the Chelsea School of Art in 1935. After a year, she transferred to Ozenfant Academy, where she studied under French painter Amédée Ozenfant. He made her “work like bloody hell,” she recalled. But instead of rebelling, she learned discipline, and began to associate art with the mysterious transformative process known as alchemy. Her mother unwittingly set the rest of Carrington’s life in motion when she gave her daughter a book on Surrealism—the blooming artistic and literary movement inspired by the subconscious mind, dream states, and automatism—with a work by famed Surrealist Max Ernst on the cover. Already obsessed with alchemy and the supernatural, Carrington had found her people. 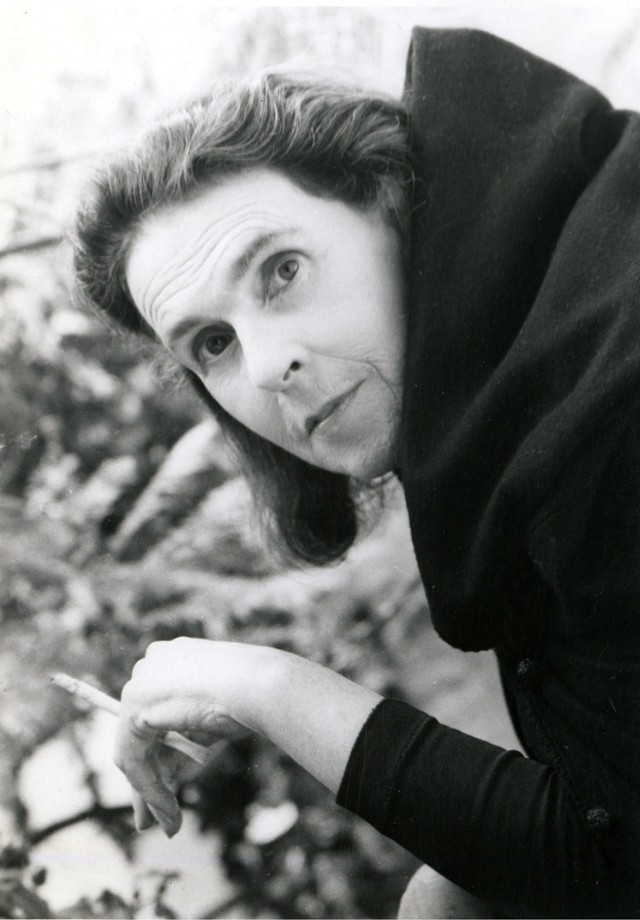 In 1937, one of Carrington’s art-school friends invited her to a party in Ernst’s honor. Carrington was 20; Ernst was 46 and still married to his second wife. In Carrington’s words, “it was love at first sight.” When he returned to Paris, she followed him. This time, her family disowned her.

“I wanted to study in Paris where the Surrealists were in full cry,” she remembered, and she got her wish in spades. Alongside Ernst, she was at the center of a group of boundary-breaking artists including André Breton, Marcel Duchamp, Yves Tanguy, and Pablo Picasso, who all hung out at the famed Café de Flore and spent evenings at Carrington and Ernst’s place.

On the surface, the beautiful, young Carrington embodied a Surrealist archetype, that of the enfant femme—the “woman child,” a kind of Manic Pixie Dream Girl who could provide both inspiration and sexual intrigue for the male Surrealists. But Carrington had been rebelling against traditional female roles her entire life, and she was not about to cave to male expectations now. “The women Surrealists were considered secondary to the male Surrealists,” she remembered, expected to do “the washing, cooking, cleaning, and feeding” when they weren’t being sexy and inspirational. “I never thought of myself as a muse,” Carrington said. She, luckily, had enough privilege to reject the role of the enfant femme, but she did not take that for granted. “If you are in a condition of social inferiority, it affects you creatively,” Carrington told an interviewer in 1975. “You might have incredible visions but you might be too bashful to show them. Your creativity becomes inhibited.”

Carrington’s creativity was anything but inhibited. During her years with Ernst, she produced the magnificent Self-Portrait (Inn of the Dawn Horse), as well as several other important paintings, and published a book, La Maison de la Peur, which Ernst illustrated. She also played Surrealist gags on their visitors, once serving an omelet filled with hair clippings snipped from guests’ heads as they slept. Ernst and Carrington’s days as a couple were numbered, though, and not only because, in Carrington’s words, once a femme enfant was “over 25, you were pretty well out.” World War II was declared in September 1939 and Ernst, a German living in France, was sent to an internment camp.

Only 23, alone and terrified, Carrington began to go mad. Pacing her terrace at night, she obsessively counted her steps and believed “that someone follows me—truly—there is no one, but I cannot convince myself,” as she wrote in a letter. Worried friends took her to Spain, but her mental state deteriorated. Carrington was diagnosed as “marginally psychotic,” committed to an asylum, and shot up with convulsion-inducing Cardiazol. She was eventually released to her family, who sent her to another institution. The guardian assigned to her was no match for the wily Carrington, though, and she slipped out the back door of a café after faking a stomach ache. She made her way to the Mexican embassy in Lisbon, Portugal, where the ambassador was a friend. Later, she recounted the harrowing experience in the Surrealist magazine VVV in 1944. “I am no longer the ravishing young girl who passed through Paris, in love,” she wrote to its French publisher the following year. “I am an old lady who has lived a lot and I have changed.” By then, Carrington had married the Mexican ambassador, and after a brief stay in New York, they moved to Mexico City in 1943. Carrington remained there for the rest of her life. After divorcing the ambassador, she married another refugee, photojournalist Emerico “Chiki” Weisz.

In Mexico, Carrington flourished. She continued to paint and write and even dabbled in playwriting, creating all the set and costume design for her theater piece Penelope, which was staged by her friend, disciple, and famed director Alejandro Jodorowsky. She formed an artistic girl gang with two other expats with Surrealist tendencies: the Spanish painter Remedios Varo, and Hungarian photographer Kati Horna. She also resumed her dinner-party hijinks, on one occasion feeding fake caviar (tapioca dyed with squid ink) to visiting Russians. Notably missing from her crew was Mexican Surrealist Frida Kahlo, who’s said to have referred to Carrington and her pals as “those European bitches.” (Carrington’s privilege and Mexico’s history of colonization probably made a friendship with Kahlo nearly impossible.) 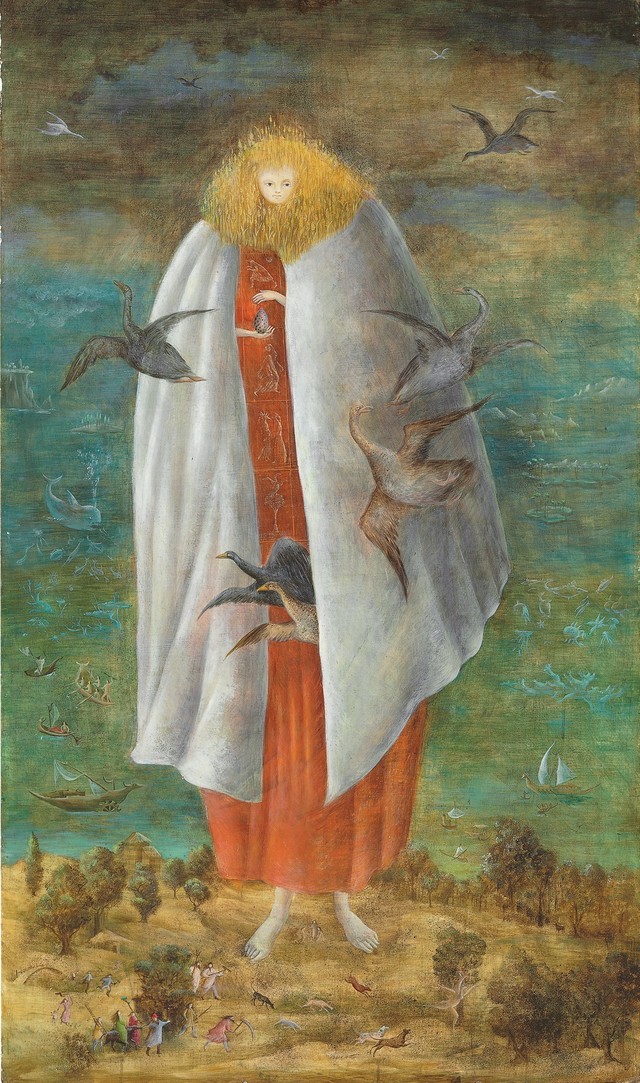 Carrington had two sons with Weisz while continuing to paint prolifically. There were 27 paintings in her first solo show in New York in 1948, the same year her second child was born. Not that it had been easy. Carrington told an interviewer in 1991: “We need a wife, like men have, so we can work all the time and somebody else would take care of the cooking and the children.”

Leonora Carrington continued to write and make art until her death at 94, in 2011. Asked at 85 about the source of her lifelong creativity, she said, “I am as mysterious to myself as I am mysterious to others.”

This article originally appeared in the December/January 2017  print edition of BUST Magazine.

Tags: Lenora Carrington , art , surrealism
Support Feminist Media!
During these troubling political times, independent feminist media is more vital than ever. If our bold, uncensored reporting on women’s issues is important to you, please consider making a donation of $5, $25, $50, or whatever you can afford, to protect and sustain BUST.com.
Thanks so much—we can’t spell BUST without U.