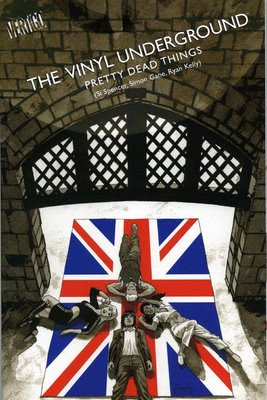 I am sad to say that this is the second and last trade of The Vinyl Underground. Apparently, comics readers didn't like it as much as I did, since it was canceled after twelve issues.

Still, you can scoop up collection one, Watching the Detectives, as well as this current one, Pretty Dead Things, and enjoy the occult crimefighting rock'n'roll goodness for a time, anyway.

The book reads like a freakier CSI, with each character a different part of the team. Morrison Shepherd (Moz, but he gets far more action than Morrissey) is a recovering coke-addict D-list tabloid darling, solving occult mysteries to keep himself sober. Leah is a pyromaniac forensic assistant by day and the Internet's only virgin porn star by night, and she serves as the team's muscle, beating the crap out of suspects while wearing ridiculous heels. Abi is Moz's ex-girlfriend, the smartest one of the bunch, and the daughter of an African tribal chief. My favorite of the crew, though, is Callum, or Perv, who busts online predators and doesn't like to be touched.

They may sound like a bunch of scrambled stereotypes, but the characters are pretty-pretty, slick and cool, with tons of damage boiling just below the surface. The book is sexy as hell, and I don't mind telling you that I got a comic-crush on Moz after the first trade, but by the end of the second I just wanted to hug Callum, kiss things better. (Yes, I know. They're drawings. Shut up.)

The series is an occult tour of London, a glimpse into damaged minds, and an unconventional crime series all at once. References to William Blake's poetry set the tone for this story arc, and it's a pretty sick mystery, but there's enough eye candy to make up for the disturbing panels, and all the art is gorgeous.

There's unlikely political commentary to go with the eye candy, and the overarching story is compelling, but the end here felt a little rushed. Perhaps the payoff to the full story would've been better with a few more arcs to develop the characters, but the series was canceled too soon. Still, it comes to a satisfying close, unlike many series cut off before their time, and it's a whole bunch of fun while it lasts. Check it out.

Tags: General , Artsy
Support Feminist Media!
During these troubling political times, independent feminist media is more vital than ever. If our bold, uncensored reporting on women’s issues is important to you, please consider making a donation of $5, $25, $50, or whatever you can afford, to protect and sustain BUST.com.
Thanks so much—we can’t spell BUST without U.