Filthy, feminist, and fabulous—Brooke Candy is a pop star for a new ear. Here, she models some freaky fall fashions, and delivers some real talk. 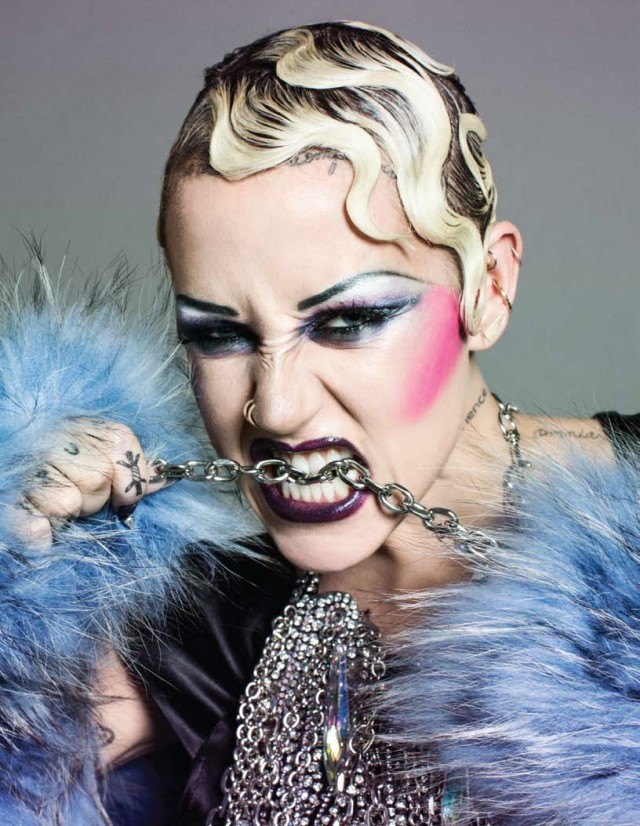 A former stripper and the daughter of Hustler’s one-time CFO, 25-year-old rapper Brooke Candy first caught our eye when she appeared in Grimes’ 2012 video for the song “Genesis” and pretty much stole the show. With her insanely long pink braids, metal body suits, and stacked raver-style sneakers, it was impossible to keep your eyes off her. Later in 2012, Candy released her first single, “Das Me,” in which she raps about cutting a man’s dick off and refers to herself as “a motherfucking freaky princess.” In that video, she sports five-inch nails, a weed-leaf covered outfit, and walks an Asian toddler on a leash down Rodeo Drive (more on that later). In short: Brooke Candy is not your momma’s rap star.

She’s come a long way since that first single. Her musical team now includes hitmaker Sia (who penned Beyoncé’s “Pretty Hurts” and Rhianna’s “Diamonds”) and she’s recently been in the studio crafting edgy, aggressive beats with some of the biggest names in the game, like Diplo, Benny Blanco, and will.i.am. As her sound has evolved, so has her personal style: she still collaborates with her friend Seth Pratt, who designs her trademark metal bodysuits, but she’s also teamed up with super stylist Nicola Formichetti, the man who put Lady Gaga in the infamous meat dress. Longtime Madonna collaborator Steven Klein directed the video for her latest single, “Opulence,” in which we see Candy’s style going in yet another direction. She still looks batshit crazy and is frequently underdressed, but her butt-length pink weave has been replaced by glamorous finger waves, and instead of a robot stripper suit, she’s dripping head-to-toe in diamonds. Opulent indeed. We got the outspoken rapper on the phone to talk fashion, feminism, and slut-shaming. 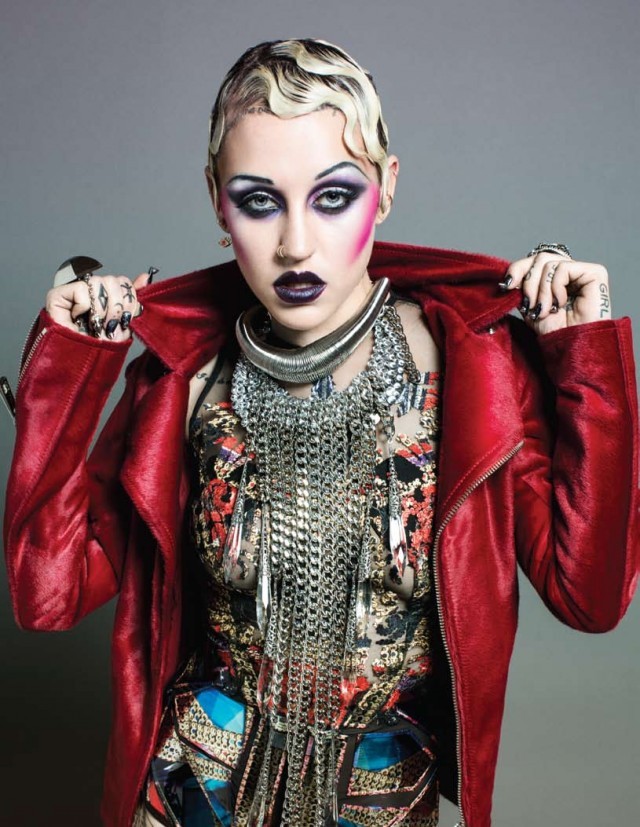 JACKET BY BARRY YU, BARRYYU.COM;BODYSUIT BY FALGUNI & SHANE PEACOCK, FALGUNISHANEPEACOCK.COM; EARRINGS, CANDY'S OWN; NECKLACE BY GASOLINE GLAMOUR, GASOLINEGLAMOUR.COM; RINGS BY GLYNNETH B.
You seem to be moving towards a pin-up glam look lately.
You have to draw people in with some sort of image. My theory is, I’ll use diamonds because they’re sparkly, so then you’ll fucking look at me. And then once you look at me and I’ve grabbed your attention, I’ll open my mouth and preach real intellectual shit in your fucking face. Because you’re already listening, you know?

You’re collaborating with some heavy hitters and developing a more mainstream sound, but you don’t seem to have any shame about selling out.
I want to be as accessible as possible and reach as many people as possible. I don’t need to, like, jack myself off in my own little genre of alternative bullshit. I’d rather have a huge platform and speak to everyone, and make music that suits that. 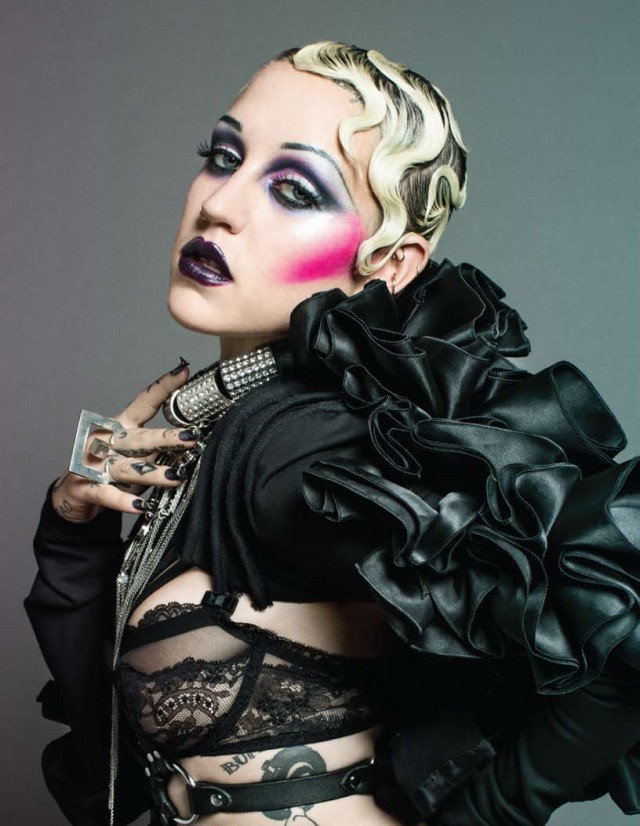 BRA BY LA PERLA, LAPERLA.COM; RUFFLED JACKET BY LÉKA, LEKANYC.COM; HARNESS BY ZANA BAYNE, ZANABAYNE.COM; NOSE AND UPPER-EAR BODY JEWELRY, CANDY’S OWN (THROUGHOUT); ALL OTHER JEWELRY BY GLYNNETH B., GLYNNETHB.COM.
How do you deal with the slut-shaming you’ve received because of your hyper-sexual look and lyrics?
I just don’t listen. If it’s not coming from someone whose opinion I really care about— because they’ve proven to me that they’re a good person, or I feel they’re more intelligent than I am—then I don’t give a fuck. I just feel comfortable being naked. It’s really that simple. The way I dress isn’t meant for anybody else, it’s solely for myself. I dress based on the mood that I’m in, or how I feel. The things I’ve done, the jobs I’ve worked, and the experiences I’ve had, they’ve all helped shape me. And I don’t regret anything. Any hardships you have to go through, any time when you’re down and out—the only way to stay happy is to find some sort of peace and beauty in it. So I found the peace and beauty that I could [in stripping]. I also got my cheap, showgirl-glam style from stripping. I worked with women who’d strip once, then go in the back and change everything. They’d put on a wig, a different outfit, different heels. It subconsciously inspired me a lot. I felt like, “Who the fuck else is doing this?” Who is comfortable enough? Who’s choosing for themselves to show their bodies? In the music industry, we can’t deny that women have been objectified. And sex sells, but I don’t know how many of those women chose that themselves and chose it for good reasons. 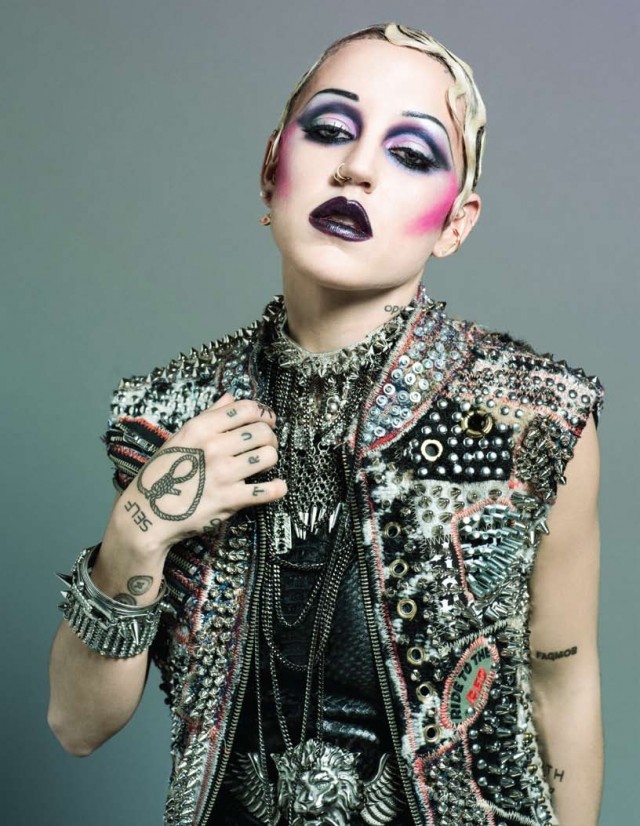 EARRINGS, CANDY’S OWN; DRESS BY MASON, MICHELLEMASON.NET; STUDDED VEST AND BELT BY DIESEL, DIESEL.COM; OTHER JEWELRY BY GLYNNETH B.

You’re a very outspoken feminist; what do you think of Beyoncé and Katy perry finally saying they’re feminists?
It’s because feminism has become this trendy thing and that’s great. Let it trend, ’cause I’m all about it. I admire their willpower, their fucking determination, but it just feels forced now. Like they’re saying it because it’s trendy. But Beyoncé put that amazing speech [about feminism] in “Flawless.” And if she’s gonna put that in a song, good, because a lot of people are gonna fucking listen to it. I just wish it had happened earlier, and that they weren’t so afraid back then. I guess maybe now they’re not afraid anymore.

Iggy Azalea recently said in an interview that some of her fans tweeted that they were going to try to fingerbang her at one of her shows. Do you ever have fans who overstep bounds with you?
Oh, I’ve had people actually do that. That happened to me in Barcelona. I was on stage, and someone just ripped my fucking pants, and put their fingers inside of me. I went nuts! I stopped the show and took my full glass and threw it at the audience. It was like, “If you guys are going to violate my body in this way, I’m going to violate your face.” I’m not gonna fucking take it. Listen, I lived on the fucking street, and you wanna try to fuck with me? I dare you. 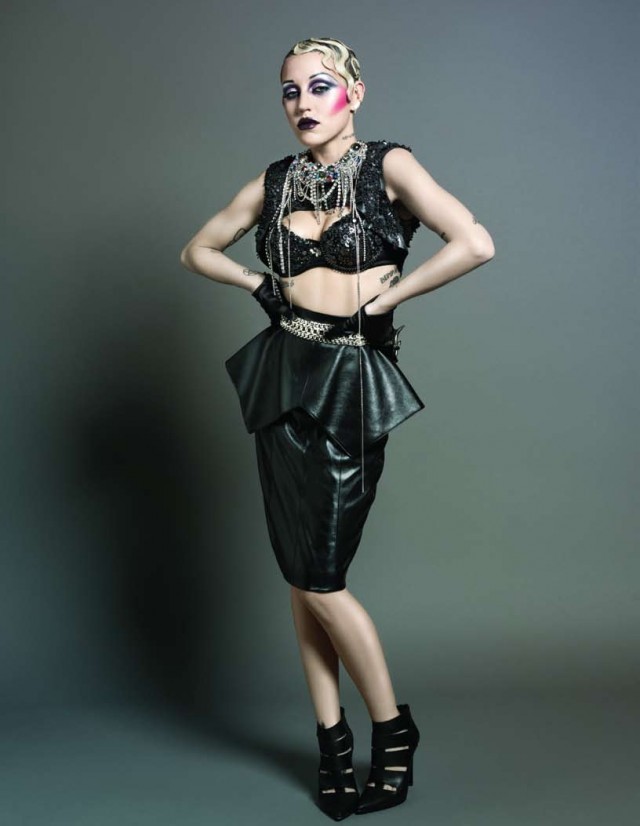 TOP BY AMEN, AMENSTYLE.COM;BRA, STYLIST'S OWN;SKIRT BY CELEB BOUTIQUE, CELEBBOUTIQUE.COM; VINTAGE BELT AND GLOVES; BOOTIES BY VIC MATIE, VICMATIE.IT.
You received a lot of backlash for walking an Asian kid on a leash in your video for “Dats me.” Can you explain why you did that?
That part of the video isn’t meant to be intentionally racist, but it is meant to be intentionally thought provoking. The whole premise of the video is that I’m a fucking weirdo who’s embraced in the hood and backed up by a million people and all my gay friends. When I’m walking down Rodeo Drive with them, though, I’m not accepted. The Asian baby was supposed to be a play on how I think that babies of different nationalities are kind of an accessory for upper-class, bougie women. All of these women could be philanthropists and amazing people, but I doubt it, honestly. I feel like it’s a weird competition for who can collect the most minority babies. That part of the video is a play on that phenomenon.

What advice do you have for girls who listen to your music?
Stand for something and don’t be afraid. Don’t be afraid of your opinions. And don’t watch TV. Learn how to speak another language. Read more books. Smoke weed. Wear more wigs. 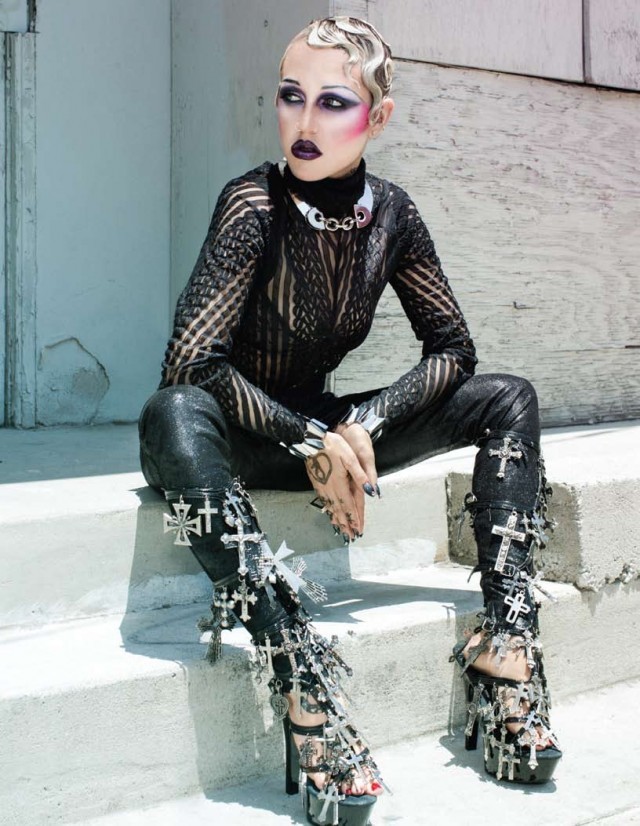 TOP BY OLIMA, OLIMAATELIER.COM; WAXED PANTS BY ALL SAINTS, ALLSAINTS.COM; NECKLACE AND RING BY GLYNNETH B.; SHOES BY GASOLINE GLAMOUR; BRACELETS, STYLIST'S OWN.

Barbie Gets A Banging New Bod

Become A Vintage Vixen With This Monthly Dress Subscription