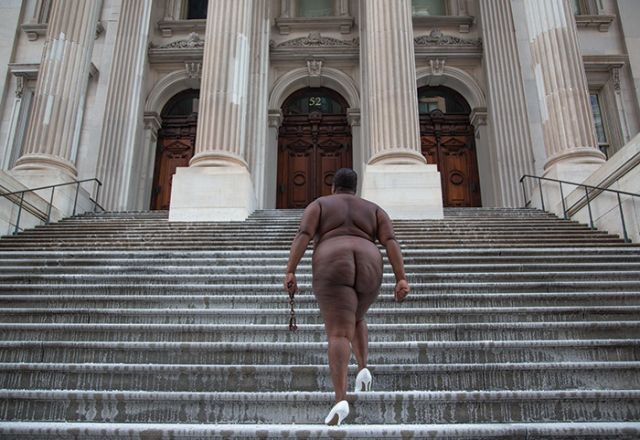 The first time Brooklyn-based photographer Nona Faustine saw an 1850 daguerreotype of an enslaved woman from South Carolina named Delia, sitting semi-nude and alone, the picture changed her life. “It was the terror in her eyes,” Faustine says about the power of that image. “Her face was so familiar to me. She looked like she could be one of my family members.” Inspired by Delia, and by Sarah Baartman, a South African woman whose naked body was displayed like a zoo animal’s in early 19th-century Europe, Faustine began her stunning “White Shoes” series.

For “White Shoes,” Faustine photographs herself nude at various New York City locations directly connected to the American slave trade. In “From Her Body Sprang Their Greatest Wealth,” Faustine stands on a wooden block in the middle of Wall Street where people were once bought and sold. In “Over My Dead Body,” she climbs the steps toward the doors of Tweed Courthouse, less than two blocks from the African Burial Ground monument. At least 15,000 people of African descent, most of them enslaved, were buried below that area of lower Manhattan. 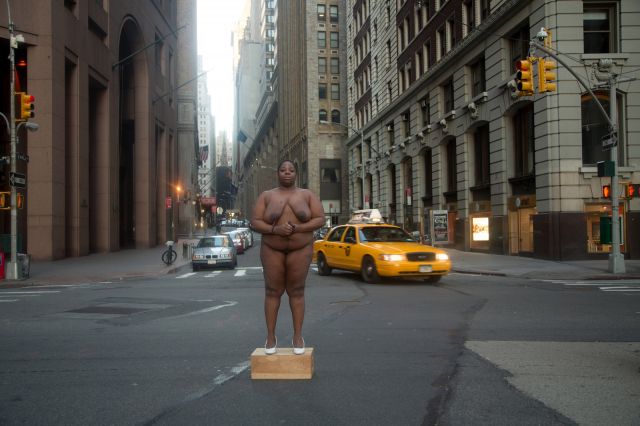 “I still have to convince myself every time and sometimes I don’t make it,” Faustine says of posing naked in such public places. “But once I decided to go forward with the nudity, there was no going back. It is integral to the piece.” Fortunately, her mother, sister, and six-year-old daughter—all three generations live together—are her biggest supporters. In fact, her younger sister Channon often accompanies her on shoots for moral support and to be a lookout. (It’s illegal to be nude in public in N.Y.C.)

But despite the risks, it’s those images of Delia and Baartman that keep Faustine going. “They serve as my muses,” explains Faustine. “They make me ask questions about how their lives relate to my life, and how I see myself as a black woman in the art and photography world.”

Photographs by Nona Faustine; First photograph: “Over My Dead Body” 2013, Tweed Courthouse, (built on top of the African Burial Ground)