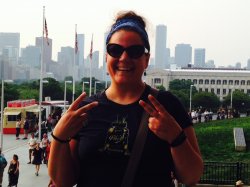 Amy Lappos has a background in news media, political science, women's campaigning, legislation and Suffrage history. She works as a Congressional Aide by day and a blogger for HillaryWarriors.WordPress.com by night, while managing the the only political FB page with a ZERO TOLERANCE for misogyny: Hillary in 2016 & 2020. She believes that ever princess can save herself and as 52% of the population, women are not a special interest but the majority. She has dedicated her life to making our issues treated as such. Feminist. Liberalist. LGBT Ally. Equalist. Activist. Alice Paulite. Hillaryite. Hippie. Granola. Kripaluian. Kidult. Phan. Follow Hillary Warriors on the website, Facebook page, Facebook group and Twitter.